I am an eBay seller who occasionally sells designer items of clothing.  eBay have recently changed their policy that certain designer items cannot be listed for any less than 5 days.  Then, for some strange reason they don't even list it as soon as you press the "List Item" button!  So you are paying for a 5 day listing through no choice of your own and not even getting the full five days that they are forcibly charging you for.

By the way, I listed three items this morning at 6am and they still haven't been listed for public viewing this afternoon at 2pm.  Also I am still waiting on a response to my complaint from their so called "customer services" department! 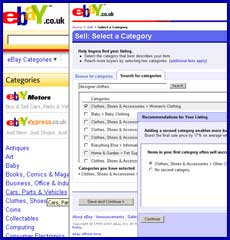 Another thing, try selling designer handbags on eBay another nightmare.  They keep booting them off saying copyright violation, even though I don't mention a designer name.  I use my own pictures own word to describe and they still won't allow it.  Try to complain and ask for details and they come back with a vague response with no details because if they give details someone might be able to beat the system so they claim.

The worse insult is I bought the bags off a eBay, so I guess okay for someone else to sell me but not okay for me to sell again.  I have have had just about enough of eBay, if your item is booted you have to write for permission to re-list it but they don't tell you that you have to figure it out for yourself.  Nothing is easy with them, contacting, getting a response or understandable explanations.

What they need is some good stiff competition from another auction site that is good and responsive.

Hello! This seems like a pleasant location, so I'll be poking my head in from time to time to read, question queries and help wherever I am able to.
03/07/14 Bernadette Montello
0

The sad loser who is "Bored" clearly has no life experience, or that in the real world anyway. When you are trying to earn a living and a company like ebay aids theives, then it's definitely a 'gripe' to put it lightly. God, what a sad tosser.
21/05/12 Sprite
-2

I can't for the life of me understand why business sellers are lumped together with private 'chuck out the attic' sellers. Once you become a power or business shop window seller, with standard buy it now prices typically offered and refunds and money back guarantees etc., you are just like any other shop. Therefore, the contact is no different that it would be for buyers purchasing from a high street shop. But to treat private sellers, chucking out their own stuff, as if they are retailers obliged to honour sales is daft. No way should there be any obligation to go through with a sale if the private seller pulls the plug on the auction, even after it ends and is first paid, and no way should buyers leave crap feedback if that happens even after they've got a full refund of all of their purchase and postage costs back. OK it's disappointing - but that's life. It is no different than two friends agreeing to do a good swap from home and one pulls out and decides they don't want to go ahead after all. I fail to see why eBay would make that informal arrangement different. As long as the buyer gets their money back and eBay gets their listing fee there should be no problem for private sellers removing negative buyer feedback on pulled auctions when the sellers was never classified as a business seller in the first place. Sometimes occasional sellers make mistakes, and want a higher price than they finally got in the end bid price and don't want to honour the sale anymore. Why should they be obligated to sell at rubbish end price if a set sell it now price is unlikely to result in many bids - as they so often do and then risk not being trusted to sell at prices they are happy with to others?
14/09/11 Anon
0

I too have just had a dreadful experience which is ongoing. I sold a genuine Mont Blanc briefcase on Ebay UK to a US buyer - I should have been suspicious when the Brazilian buyer (or so they said) asked me to ship to a different address in NY to 'avoid customs problem'. I duly did (after they paid - late) using the international signed for service. The parcel was tracked to the US post office in Massepequa, listed as received at their office, then noted as 'Origin Post preparing shipment' which may mean anything from extra postal charge to unable to deliver. The buyer opened a case as not received, which Ebay then closed, without further investigation; did not ask me for the proof of posting etc, and I am expected to pay for a refund, plus all the shipment costs!! It is outrageous. I think the persons concerned are also spam artists as well as scam, due to the number of US spam emails I am now recieving. Further attempts to contact Ebay via appeal have been fruitless, emails, calls ignored or not within time zone to US - I am having a complete nightmare. I will seek legal advice on this as ther is no way I am paying twice for an item I posted in good faith. They are also using two different names on their account so buyer/seller beware, if something is out of the ordinary, it is a scam. Ebay are no help whatsoever. I agree it is time for another compay to open a new site with better feeds and better seller protection.
20/06/11 Debbie
-2

I sold an item (( # 330508386923) to a Chinese American Dr. Q. Fan. For US$ 358. The person paid through paypal and I sent the item by registered mail. After that he claimed his money from Ebay (NOT paypal) as the item ‘was not received’ (Case # 5006802520), so the amount was deducted automatically from my account. As fraud was very evident, I started an investigation at the Dutch postal Customer Service. I got a report that the item was received on the 12th of Febr. 2011. Ebay.com cannot read the report as it is written in Dutch. On his turn Ebay.nl refers to ebay.com. Ebay is en expert in giving replies without contents, that is to say they are very good in sending useless info and only refer to other sites, persons but they are not able to solve a matter like this. Moreover they are not interested doing this and they tolerate and reward this type of fraud. I stopped selling after 12 years. To me Ebay-protection is down to zero.
Chenna2
29/03/11 chenna2
-18

Hi Gripe,
I have a very big Gripe against ebay. I have lost quite a lot of money through ebay becuse they do not vet the sellers I have been scammed through an ebay site and sent money to a company in China name address of company supplied on request I think ebay are going to regert what as happend thats if they really care as I dont think they really give a dam about buyers. Please warn others about these scams and somebody might not fall into the same trap I did buy the way details about the case suppied on reques all the best nurdy2453
03/03/11 nurdy2453
-5

We purchased three gaming chairs at a total cost of £130 as Christmas gifts for our three children aged 9 and twins at 7.

On the 7th of January we emailed the seller to advice them that one of the seats had split and to arrange for a replacement. Following an exchange of emails and photographs we again emailed the seller, on the 16th January, to advice that a second seat had split and this time we asked for a full refund as the chairs were clearly not fit for purpose.

The seller responded stating that the refund policy was strictly 7 days however they would try and resolve the situation by offering to exchange the seats with a stronger version and would email through some further details and images of potential replacements. It has now been some time since we contacted the seller, they have promised twice to send details on replacements, I have contacted them twice by phone and email to seek a resolution.

My children are now without their Christmas presents and we are no further forward.
23/01/11 Stephen Russell
-10

I have been selling on e-bay and selling good value second hand items making sure there are no defects and that photos and explanations are given, keeping to rules, and I have had excellent feedback on being honest and trusworthy and really pleased with items fast delivery, good packing. E-bay bombarded me with e-mails that my standard is below average giving all false reasons they are putting me to the back of the selling pages and restricting my selling. E-bay are using bullying tactics on small sellers because they feel they have the monopoly!!!
10/11/10 brassed off!!
-3

Free P&P on eBay won't be good for sellers

Defective trumpet bought on eBay from a power seller