I have a gripe about family rooms in pubs.  I was due to meet my friends for lunch as one of them was celebrating their birthday.  I had my thirteen-year-old As pergers boy with me and to be honest, I am very disappointed by the way the bar staff treated us.

The barmaid at the pub told me that I had to sit in the family room with him to eat my meal, which was fine and I was quite happy to do this.  I then went to get my friend and I a drink to celebrate her birthday and was told that I had to leave because I had finished my meal.  She said that I couldn't have a drink because my son was with me and it was due to the licensing laws.  We had to leave, even though he was not having a drink or eating; it made no difference that he was just sat quietly next to me playing a gameboy. 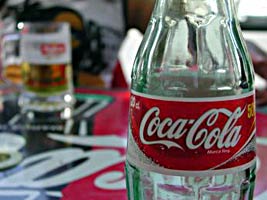 Not only that, when I went back to tell my friends and politely take my leave, she came up to me again and insisted that I leave the bar.  It felt as though I was being thrown out just because I dared to have a child with me!  I don't know if this kind of thing is quite common or not, but I couldn't see the problem as I was the parent and he wasn't even having a drink let alone alcohol. Why was he not allowed to just sit by me?  If he'd been a toddler, would we have been treated in the same manner?

Also, it was extremely embarrassing to be told to leave the way that I was.  Needless to say neither I, nor my friends will ever visit that pub again and I would like to know exactly what the licensing law does say about this matter.

For example, in a restaurant you wouldn't expect to be kicked out as soon as you had eaten would you?  In some pub chains such as Brewers Fayre, you can have a meal and a drink with family and not be immediately evicted as soon as you'd finished.  I thought that this was the whole idea of family rooms?

When I go to a pub I go for adult company and conversation not to listen to someone else's screaming kids.Take them to the park or a fast food restuarants. .I promise to stay away from those places if you keep your kids out of adult places...
16/03/20 Sam
0

Bob Eastwick i totally agree with you, only recently my friend and I went shopping on a Sunday afternoon and decided to have a sneaky glass of a Wine at one of the pubs in town I could not believe my eyes when I saw a handful of fathers supping pint after pint whilst their brood of kids treated the pub as a playground not only was it irresponsible of the fathers but dangerous for the child. I got the impression that it was daddy's turn to mind the kids but obviously didn't want to so instead of taking them to a nice park so their little darlings could run riot with other little darlings he took them the pub instead. All my friend and I wanted was a nice quiet drink in a adult environment, no such look in that department. Pubs should be adult places only and we should return to the days of nobody under a certain age aloud in a alcohol serving establishment.
21/10/14 LancashireLass
2

Children should never have been allowed into pubs in the first place. Years ago, many pubs had family rooms where you could leave the children to play. They were never, ever allowed in the bar. Even today, I believe it is still an offence for a child to be within 12 feet of the bar but how many pubs enforce this? If only someone could produce a list or web site showing all the child-free pubs in the U.K. There is a site for B & Bs and hotels so why not pubs?
21/10/14 Bob Eastwick
2

It'd selfish to take kids in pubs: selfish toward other customers, selfish toward your kids. Take your kid to macdonalds and let adults have a pint in peace. If you want a beer, get a sitter!!
27/05/13 ally
6

i hate noisy kids in public and want to slap their parents sometimes. they dont seem to realise that it annoys others.
there was a time when the pub was one place a single bloke or couple could go without children there.
Some pubs have a no children after 6.30pm rule so that they leave at a reasonable time.
24/05/13 ahforfoulkessake
3

jack, if you put on live music with appeal to your customers, tribute bands and classic rock bands, then I would say definitely yes.

Fed up of pubs turning into a kindergarten for parents to take their kids and leave them to run riot and run around screaming. Who wants to go to a pub and be surrounded by that? We go to a pub to relax, it's an adults place NOT FOR KIDS - GET THEM OUT! A pub isn't for children, it's for over 18's.
10/10/12 Emzzz
6

Where have you been? Wetherspoons have had this policy in place for ages; and it's not to penalise parents, just to stop kids running around annoying other patrons and also to protect the kids from being forced to remain and watch their parents swilling back the booze. If you don't like this policy, then stay away and drink a bottle of wine at home or something.

Pubs where I live as a rule have a "no under 21s" policy that is entirely due to irresponsible parents bringing their badly behaved brats into the pub. The very people who whine and cry about the policy are the people who forced it to be implemented.

When I go to a pub, I'm not going to censor myself just cuz there are snotty nosed brats there. They shouldn't be there cuz the pub is for adults. I don't go to the adventure playground and sink a bottle of vodka while loudly discussing my s*x life; therefore, parents should keep kids out of the pub til they're old enough to be there. If you want to have a drink, either pay for a sitter and go out or stay home with a bottle of wine. Not hard.
19/09/12 Discord
9

I refuse to give my hard earned money to any pub so all win for me. so what if they don't want my child there, I DON'T WANT MY CHILD THERE and really neither should any parent. the only places I will take my child to are the classier places with genuinly nice people and no chavs pulling out there last handfull of 2's and 1's out to go halves on a half lager lol
15/09/12 milia
-10

Rubbish Mrs Moon. I respect the fact that some pubs should welcome children, but certainly not all. Adults are quite right to want some adult only spaces, irrespective of how children behave. I want to be in an environment with alcohol, talking to adults about adult things, including the odd expletive now and again, s*xual innuendos if appropriate as a source of humour, generally an adult level of talk that does not have to pay any regard to the presence of children. You are quite wrong to say that 'all pubs should be brought up to date and be made child friendly pubs!' Quite, quite wrong. Adults need their own space just as much as children. Our society is becoming so extremely accomodating to children that it is getting ridiculous. It simply is not too much to ask that some pubs - perhaps the majority! - should be adult only spaces to give us all a breather from the demands of children who are intrinsically so egotistical.
24/01/12 miserablemoaninggit
5

For the people who think children should not be allowed in a pub, I run a pub near the sea side and welcome children in our pub. Parents take their kids away for a family holiday. They come to eat and socialise with a good none rowdy atmosphere. Admitted I don't allow them at the bar and I do tell them if they get a bit out of control. Then I let the parent know that I have told them off, I have never had any problems with it. Incidently I don't allow swearing, drugs or lager louts. So all in all YES kids should be welcome in pubs as long as they are kept under control. All pubs should be brought up to date and be made child friendly pubs!
24/01/12 Mrs Moon
-8

I agree with freddie, If you don t like it don t go to pubs !! Have you nothing better to do? on a nice day go to the sea side,walking,what is this fixation with going to the pub with children? leave the pub to ADULTS.
08/05/11 ooh you bounder
0

I say name & shame the pub along with the person who asked you to leave. I do hope you complained to the senior.
28/04/11 Tinks
0