After hearing about a mother being followed and reported to Social Services after an off-duty policeman heard her chastise her misbehaving children in a supermarket, I felt compelled to type this rant about the way children are behaving in this day and age.

I'm only 30 (nearly) but I remember when I was a child, if I was naughty my parents wouldn't hesitate to give me a smack on the legs or bottom.  It was a short, sharp shock which didn't really hurt, but was sufficient to shock me out of doing whatever naughty thing I was in the middle of.  I grew up knowing right from wrong, and with, I believe, a sense of decency, morals and respect for others.

Sadly, kids now don't seem to have that same respect or parental guidance.  To be fair, I don't think the parents can be entirely blamed; this is yet another legacy that our useless government is bestowing on us.  By removing all parental and authority's rights to discipline children, they're growing up completely out of control.  Why, I've just read an article from the Mail about a gang of 6 year olds who stopped paramedics from treating a toddler who'd burnt her back on a radiator.  Apparently emergency services had to come to the scene armed with tazers.  Protection against 6 year old thugs.  Would this have happened 30, 40 years ago?  I don't think so. 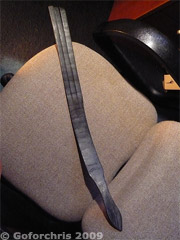 I am worried my daughter will grow up to be a yob...

I'm all in favour of bringing back corporal punishment in schools.  A radical idea perhaps, but if regulated and monitored I think it would go a long way to solving the problem with kids today.  A cane across the palm or backside for serious misdemeanours in school would stop a lot of bad behaviour which children are starting younger and not growing out of.  But no, teachers are given no leeway whatsoever to deal with bad behaviour in their classes.  I've heard that it's now even forbidden to send a child out of the classroom when naughty, because some health and safety policy says they may hurt themselves.  I say, better themselves than some other poor child who probably hasn't done anything wrong, or their long suffering teacher.

I'm now a mother myself and I am worried my daughter will grow up to be a yob, or worse, because of peer pressure and lack of discipline in her school.  I'll do my best at home to instil values and good behaviour in her, but children are influenced by so much more than their parents and I fear my efforts may not be enough.  What this country needs is a government who isn't afraid of everything, and to allow schools to be run by teachers again, instead of the pupils.  And allow parents to discipline their children instead of letting them run wild for fear of Social Services.  A deserved smack on the bottom does not equal child abuse.  It's far more abusive to the child in the long run to let them get away with everything.

something should be done with badly behaved disrespectful kids nowdays I had cane at school for a lot less than how kids behave these days. Yes I do agree with giving the cane in my younger days you had to be good mannered to everyone not just teachers.
28/08 miserable old git
2

When I was in school, I may have got threatened with the cane, but didnt get it, but I did get my legs slapped by a teacher for not listening to her during a lesson, I was more interested in watching my friend, she slapped my legs and made me stand with my face to the wall, I also had occasional smacks from my parents, but I grew up knowing right from wrong.
28/07 jmh
2

Corporal punishment should return to schools, not only were children better behaved when the threat or a smack or the cane was there, but they grew into decent people
28/07 jmh
2

I don’t know what to put as a nickname

Agreed. The law permits reasonable chastisement of a "child" which is now banned. Or "other persons" anyone over 18 in your house. So they can be punished then. But as a person in my early 20's I agree it's getting ridiculous.
04/05 I don’t know what to put as a nickname
2

When it was voted against in parliament there was a wedding going on which stopped those who wanted to vote for discipline to continue could get to commons , due to road closures.
I was slippered as a child at school. Following this I never put a foot wrong again. This was in 60's.
At my school both boys and girls got it on the bottom. It was more shame and embarrassment that taught me rather than a sore bum.
Do I think it should be brought back? Yes as an ultimate final sanction.
26/02/20 Dave
1

I would definitely like to have corporal punishment reintroduced. I would suggest that it does not only occur at secondary schools, but at junior schools so that children will have started to have developed a sense of acceptable behaviour and attitude. I believe that corporal punishment helps to develop a sense of focus for academic and practical tasks that can last throughout an individual's life.
10/08/18 Gerry Kettle
5

Children should be flogged on the butt for bad behaviour. Spare the rod and spoil the child
26/02/17 robo boy
4

Jane, you have my sympathy! We have been in a similar position more than once. (Can't leave a comment on your gripe for some reason.)

Last year or the year before we saw a family in the check in queue and hoped they wouldn't be near us on the plane, but of course they were. Grandparents with tattoos, kids making a nuisance of themselves all the way to Turkey. And then they were near us on the way home too, but not in our hotel, thank heavens.

We had another flight a few years ago with a screaming 2 year old. Never stopped screaming for more than a few minutes at a time. You'd just have time to think it had stopped and relax a bit, then it would start again.

Another time I was next to the window and the child who had been kicking the back of my seat stuck it's foot through the gap between my seat and the window right by my elbow. How I resisted the temptation to hurt that disembodied foot I'll never know!

Separate sound proof compartments for children would be a wonderful thing. The grumpyoldman always says they should be towed behind the plane on a bit of rope!
22/02/16 grumpyoldwoman
2

I have recently had a flight home from the Canaries and it was the flight from hell and all because of two girls generally being a complete pain in the backside and sat directly in front of us, as for the adult who was sat next to them also couldn't careless. I have also just submitted a full gripe on the issue. My opinion is definately bring back corporal punishment, I'm not talking about throwing the wooden black board eraser at us from half way across the school room, like our teachers used to do, but the head teachers had a slipper and we were petrified of it. Today we are way too soft on children and a sharp short shock with a slap the the legs or backside won't do any lasting damage and keep the little blighters in check. Some Children these days do not know the difference between right or wrong which effects their social skills when around other people or in public, and who's faults that the parents who also have the I dont care attitude so at present I can only see it as an escalating problem.
22/02/16 Jane
5

When i was at school i was once punched in the stomach by the headmaster, a teacher nearly knocked me unconscious with a big, thick book while another would hit us with a full-sized shovel as punishment.
Ah the good old days!
05/05/14 Phil
1

My answer is yes corporal punishment should be brought back to schools.
It should be brought back as an option as well as all other forms of correction they are using in schools at the moment. Of course you will get the occasional sadist, who if they went beyond the bounds of reasonable CP should most certainly face prosecution. When I was at school in the 80s we had corporal punishment as well as other forms of discipline, such as lines, detentions, isolation, etc.
The teachers were on a whole sensible, you were not hit every few minutes.
Most of the time teachers used the methods that are employed in todays schools and only used CP occasionally.
From reading below and seeing the voting I can see someone has been on here quite a lot voting down comments that are for CP in schools.
I will tell you what why don't you give all the countries children a free rein to do as they please, let them run things and be in charge. Give them no guidance or correction, let them break laws and rules. Do this and you will get the society that you deserve, a very bad one. Society these days is far worse now than when I was younger. I predicted what society we have today when CP in schools was outlawed and how children speak to teachers and adults. A much more violent world, with rules and laws that benefit the wrong doers, criminals, and perverts. Yes lets look after their human rights first and the victims second.
You really are very soft and silly people who finally need knocking of your soap boxes. Your anti CP nonsense is now wearing very thin with the majority of the public and it will continue to do so.
So called do gooders have had their day, your ideals are not working, they are failing society, and have been for a long time.
The majority are fed up with do gooders now, you very silly people.
So yes lets see CP brought back and used along side other forms of modern and old methods that are used in school in this century.
Teachers should be properly trained in the subject they are teaching. They should be trained how to handle children psychologically, with discipline, and with compassion and love.
They can't even hug an upset child these days because of do gooders or tend to a cut on some child's knee without a second person present for fear of being labelled perverted. Or they are thought of as being strange or having other motives because they hugged an upset child.
Yes bring corporal punishment back, but it must be used sensibly and with strict rules.
30/01/14 Oliver
17

Ah the good old days of the 1950s when we legally murdered and wounded our citizens. At least we didn't have to pay women the same as men, didn't have to employ non-whites or Irish, or tolerate homosexuality. Yes, the good old days when our young men were forced into two years of slavery for the state, the roads were empty because few could afford cars, and nobody took foreign holidays.

getting smacked by parents and gettin belt at school didnt do any of us any harm. As the writer said we grew up knowing right from wrong and with morals. Im disgusted with this country now and its excuses for governments. Its a cess pit full of delinquents. Most of the crime now has been caused by this and these bum governments
09/08/13 MrAngry
-2

Disagree on this, physical punishment is wrong, abusive and does not help behaviour in any way.
12/05/13 JrJohn
-14