I am becoming very concerned that our Prime Minister is becoming increasingly out of control where spending our money is involved.  Each time he goes abroad, he makes speeches promising huge sums of money to the people he talks to.  Since he came to power, his total giveaway in this respect is eye-popping.

Very recently he unilaterally announced that the UK would shoulder one quarter of the EU's donation to Developing Countries for help with alleged Global Warming problems.

There are 27 countries in the EU and I don't see why on earth should we pay 25% of the sum due?  Yes, rich countries must share their wealth with those who are poorer.  We did this when we had the world's 4th most prosperous economy.  But we are now a financial wreck, slipping deeper into bankruptcy with every day that passes. 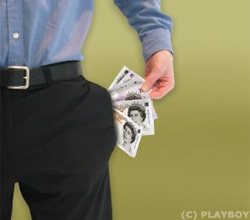 Mr Gordon Brown perhaps ought to recall that charity begins at home...

My own view is that Mr Gordon Brown is now so desperate for popularity that, realising he cannot get it in this country, he must go abroad to scatter largesse in all directions and so win the gratitude he craves.   Mr Gordon Brown (possibly we should now call him 'Lord Bountiful'?) perhaps ought to recall that charity begins at home.  The people of Cumbria, homes devastated by last month's flood damage, would have been more deserving recipients of this huge sum of money, which will now disappear abroad.

Mr Gordon Brown would no doubt ignore this advice.  But can someone please stop him from going abroad again and spending money like a drunken sailor on shore leave?  It is we taxpayers who must pay for this, long after Mr Gordon Brown is history.

Oh you lot will love this! If you Google "Exclusive Gordon Brown Confession - 50 Ways Labour Conned You" then have a jolly good laugh at how it has gone down the pan!
02/07/10 Terry Tibbs
-2

it's time to line westminster bridge with lots of sticks driven into the ground and to mount there lazy, corrupt and treasonous heads on these sticks.
04/04/10 Aleedsfella
-13

The first sentence of this gripe is very true: Gordon Brown is out of control where spending is concerned. The country has gone bankrupt and he makes back the money by passing more laws and getting officials to fine you. He is totally corrupt!
02/04/10 Terry
-9

Gordons latest ruse is to sell the port of Dover to the french, which should raise £350m, haven't we had enough grief with foreign ownership of our assets,

It is like being back in 1912 on the sinking Titanic, with Gordon going around making more holes to be sure.
07/02/10 Gainsborough lad.
-4

I would like to apologise on behalf of Scotland for inflicting first Bliar (who is at leat part-Scottish) and now Brown on the rest of the UK. We are deeply sorry.
01/02/10 Andy
6

This last week we have been warned about selling our old gold that we have lying around to these postal gold buying sharks that have sprung up,

Good old Gordon didn't worry about this a few years ago did he when he sold all the countrys gold reserves at a knock down price.
24/01/10 Gainsborough lad.
-20

My Braunschweiger's promise that the UK would shoulder one quarter of the EU's donation to Developing Countries for help with alleged Global Warming problems was actually a promise cooked up by Tony the Bliar. Looking at this from today's standpoint, now that Mr Bliar has been discovered to have created one or more companies ready to cash in on the global warming scam, one can see WHY his best pal and bum buddy Gordon is now reminding everyone where their hard earned tax money will end up. Quite a lot of it in Mr Bliar's pocket, if he gets his own way.
20/01/10 Ron Knee
-4

Power corrupts and absolute power corrupts absolutly. Mr. Brown must think he'll get something out of helping other, regardless of who those others are; I can't say, that anything he has done while in power, has been done much for the British citizen first. Like many a politician before him and I fear many to follow, he blusters and remains in power & high salary, as long as he can manage. Providing he's able to build a good sized nest-egg, he'll not be too bothered about the rest of us.
03/01/10 Kryton
1

It is ironic that a British Primeminister (or a 'foreign' primeminister from the perspective of the English) is spending billions of Bristish tax payers money, and plunging us further into debt, when being British itself feels so incredibly 'cheap'. Anyone can be British these days - just jump on a boat, train or plane and come over, all are welcome, whatever race, religion or creed, whatever political views you have, come on over and join the cheap British population. Once citizenship feels so cheap, then a country is in serious trouble. But hey! If it increases the GDP, then what the hell? More irony?
28/12/09 miserablemoaninggit
-9

Gordon Brown has predicted victory in next years election,

Mafiosi All Around You

Soon I will no longer be able to post my comments here. I will not be able to afford it anymore. My democractic opinio will be stifled by economic circumstances.

Remember the majority who post comments on the internet are middle class bourgeois people who can afford time and money. They are promulgating a point of view of promoting capitalis,, and its evil ways. They are subverting the thoughts of the workers.

This is precisely what the government is doing all the time.
27/12/09 Mafiosi All Around You
-7

Yes, and the reason he does it? No doubt pandering to his own Ego impressing the Ministers at these meetings. And who ends up paying the price with higher taxes and cuts? We do...
24/12/09 BigBad Bear
-21