When will the British public wake up and realise the mess our country is in?  Britain was heading for recession when Labour came to power in 1997.  The conservatives had sold everything and dragged the British female out of the kitchen to dilute the labour market, break the unions and stop a full blown recession.  Labour have continued to sell everything off and dilute the labour market with immigrants, these measures only work on a temporary basis and now we have more people than jobs.

Labour have been cooking the books for over a decade and I simply do not believe a single fact or figure that comes out of Westminster these days.  This horror story began when Blair and Brown hatched a plan to get us all borrowing.  It's hard to believe but back in 1997 the British people did not like to borrow, so they artificially inflated the value of our homes.  This was done by blocking the sale of large land banks and removing competition with reckless legislation.  And we fell for it hook, line and sinker.

Then they made things worse with their tax credits system - great for the economy but it destroyed the family.  Basically paying women to split with their husbands.  There are town and cities around this horrible island where more 50% of money spent is actually benefits or tax credits. 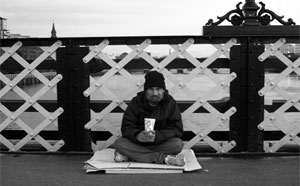 As for starting infrastructure programmes to create employment, Labour have been doing this very thing for years just to keep the economy going.  New hospitals and schools everywhere, but to keep their finances looking healthy they forced trusts and local authorities to borrow the funds from the private sector at twice the rates the government could have got.  Now these NHS trusts are struggling to service this debt.

The growth in our parasitic public sector is down to government simply over complicating things to create jobs.  The public sector pension is a joke but our 'Mindless Parasites' are not willing tackle this problem as it's their nest egg.  In fact 50 to 80% of your council tax goes straight into the public sector's bullet proof pension pot in some areas with local council employees awarding themselves six figure salaries.  Meanwhile the public sector steal our pensions by taxing them!

I feel no comment on the greed and corruption of our MPs as it is common knowledge, but in a little while they will have to cull the public sector of all its created jobs. I could go on forever!  Basically the fools who created this artificial boom thought it would last forever and they created an economy which was 100% dependent on perpetual growth.  Well the growth stopped suddenly and now this island's general population of narcissistic fools will pay the price, while the worlds wealthy and political elite a.k.a.  'The Bilderberg Group' (Google it) retire to some sunny country with all our money.

At what point will the spineless British public revolt?  Half of your salary (if you still have one) now goes in taxes.  We are working January to June just for Gordon and Co., and this time next year it could be as high as two thirds of your income (January to August) due to the criminal bank bailouts.  I for one have had enough!  It's time the public got their heads out of the sand.  Every moron in this land thinks they are wonderful and well informed important members of our fair society and the system will look after them.  You are living in a bubble created by your government and the media they control, we are all slaves to the fractional reserve banking system.

The British public question nothing any more.  We simply capitulate to these parasites in every aspect of our lives.  It is time we got our heads together and stopped arguing among ourselves and turned our attention to the people who cause all our problems.  'Our Government' is by far the most destructive force ever to blight this country (followed closely by the central banks).  Having checked my gripe I see I may come across as a little fed up with my fellow countrymen...  and to a point I am.  However, the British people are still fundamentally good people, but our apathy and inaction is now bordering cowardice.

"David Cameron and European Council President Donald Tusk are set for a "crucial" day of talks about the UK's renegotiated membership of the EU".

Don't you believe it, They've already worked out how to fool the people of the UK into believing Camerons deal is good for Britain to remaining in the EU. Just remember that great deal for Googles back taxes, and they really thought we were stupid enough to believe that was a great deal. It's not Cameron/ Tory Government doing this deal, its the financial establishment making sure their pockets remain lined.
01/02/16 Next
0

David Cameron 'considers private school' for son - despite saying his children should be state educated.

With the PERMISSION of other EU nations !!. So now the UK has to ask this unelected body how our government can spend YOUR taxes and monies that should be spent on British people first. No wonder the UK is in such a mess.
29/01/16 Next
2

Mr Cameron, you really are making yourself look silly, or is that you enjoy being kicked in the nuts.
28/01/16 Next
1

Any increase of the BOE interest rates at this time would further demoralise people, the pro EU movement knows this could affect the voting trend in the coming referendum on european membership. The super rich that controls the UK government and the UK will apply all and any psychology to influence this vote. If the UK votes to remain a member, watch how quickly the rates are increased.
27/01/16 Next
1

” With respect and sadness we report the death of a 51 year old gentleman as reported on 4UP by the close friend who found him dead: “Another one off ESA. My friend who I have been trying to help by getting advise from 4UP over the last couple of months DIED in a freezing cold flat on Tuesday evening. He went 14 weeks with no money only to be told that his no compliance for attending an assessment had been good cause and he was entitled to his money with back pay,back to 5/10/13. He never got to see a penny. His money was paid into his bank on the afternoon he died. He was so ILL he couldn’t make it to the cash machine.

@marmalade, As I say he has made it clear of his dislike for this country and for English/British people so why on earth does he choose to stay in a country he clearly despises? I remember eating liver as a kid and not liking it, I haven't eaten it since, he has been in a country he dislikes for 11 years, seems totally illogical to me. any reasonable person would cut their losses and pack their bags, we've all left jobs and relationships we didn't feel happy in, found others and been happier it makes perfect sense to get out a situation you don't like it certainly makes sense to get out of a country you don't like.
09/03/14 Tired and emotional
-1

Perhaps his British 'work' colleagues and neighbours (are there any Britons still living in London?) might like to see what he has written about British people, some of his more insensitive comments haven't gone down too well amongst certain people, you know people really must be careful what they post online.
09/03/14 Tired and emotional
-1

T&E, I can understand that you perhaps disagree with our Clinty, but he seems a reasonable person, as do you apart from this obsessional hatred you have for him. Don't let him get to you!
09/03/14 marmalade
0

I don't own it yet, I have a mortgage like millions of other working people, yes it does seem ironic that I'm keeping that whiny kiwi rent boy in housing benefit, that isn't the reason for my dislike of him, he can't help being on a low income and not being able to get on the property ladder it's his extreme anti British views that have incurred my displeasure, I don't mind foreigners hating this country as long as they do so in their own or another foreign country but when they emigrate here and do nothing but moan, complain and run us down I find it both ungrateful and insulting, he's made it abundantly clear that he doesn't like us and has no respect for English or British people so why remain in a country he obviously doesn't like? He could always go back to New Zealand or find another country to live in while disliking us, there are plenty to choose from.
09/03/14 Tired and emotional
-1

T&E, So, you don't own your property and you are still working. Does it upset you to know you are keeping Clinty boy with a part of your taxes, no wonder he's laughing his head off at you. So, now we know why you keep on about him, he's getting one over on you.
09/03/14 Anon
1

My ward is staunchly conservative on a council basis but part of a traditional Labour stronghold , I am a working class person with a mortgage to pay whereas the majority of my immediate neighbours are retired or have paid their mortgages off so the majority of people in my council ward naturally gravitate towards the tories, whereas a lot of local industry has been decimated so people obviously still see labour as a 'workers party', in my opinion there isn't a party that represents the working class who have bills to pay so until such a party comes along I will abstain from voting, Clint is unlikely to stand for Ukip as he is massively pro EU and supports mass EU immigration, if Ukip are elected to either the local council or Westminster they won't be interested in the concerns of the British working class so on that basis they won't represent me, they will represent the 'I'm alright stuff anyone else types' if I was against workers rights I would consider voting for them but I'm not so I won't.
09/03/14 Tired and emotional
-1

Tired and Emotional, If UKIP are elected in your ward, he or she WILL represent you whether you like it or not. It's called democracy. And whats more, the UKIP candidate in your area is your lover Clint.
09/03/14 Anon
1