I grew up in a mining village and lived through the eighties under the rule of Margaret Thatcher.  From my childhood I know a little about living in a forgotten land, and whilst the Tory's were supping champagne in London we weren't having so cosy up north.  My working class parents voted Labour as did I suspect their parents before them, and throughout my adult years I too have voted Labour...  that is until recently.

It all started when I began to see this country run into the ground and what was left handed out to anyone who wanted some.  This wasn't the same kind of betrayal that we experienced in the Thatcher years, no this was something new.  It wasn't blatant disregard for working class people where at least you knew who your enemy was.  It was more like a smile with a hand firmly clasped on your shoulder to distract you as the knife slides slowly in from behind.  That's the best description I've got for the way the Labour party operate these days.

Jeremy Corbyn is a very dangerous man in my opinion and until he made the news during the leadership campaign I must admit I didn't really pay him much attention.  No doubt Hitler went by unnoticed too and whilst I can't exactly draw on too many parallels there, I still think we should all be very careful of this man.

There are a few of Jeremy Corbyn's policies that give me concern.  First of all is his ambition to scrap the Trident program and leave Nato.  I know a lot of people - mainly tree huggers and delusional optomists are all in favour of this, but I don't think it's a sound idea at all...  leaving your country defenceless I mean.  Probably a smart thing to do if you've got your own agenda and you're not that patriotic though, OK, we'll think about that one. 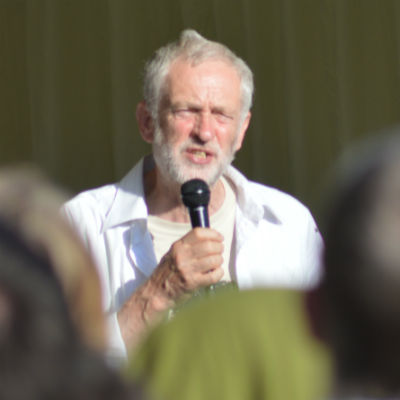 Jeremy Corbyn ... he squirmed like a worm on a hot stone

The next thing that caught my attention was the fact that Corbyn won't back an EU exit.  Why not?  Do you really think staying in the EU is good for Britain?  Have you seen the hordes of refugees and migrants banging on our gates recently?  Fair enough some need help (thanks Angela Merkel), but some are just looking for an easy life without having to work.  That's probably what I'd do next if I wanted to destroy the country - keep us in the EU!

So if you really want to show complete and utter disrespect to a country what else can you do?  OK, you can shrug off a few traditions such as singing the national anthem and kneeling before the Queen at the Privy Council ceremony.  At the time of writing this has yet to be seen, but when questioned on the subject he squirmed like a worm on a hot stone.

No, to my mind this man is neither patriotic or for the people of this country and should be watched very carefully indeed.  I for one will not be voting Labour whilst he is their leader and I think that only a fool would trust him.

By: Not voting Labour again

I won't be voting labour, I'm voting conservative for the first time in a election.

Boris Johnson should not resign, we went through the sixties with no problem, didn't need the eu then. Boris Johnson is the new Winson Churchill.
08/09/19 Celest
4

I will be voting for Boris Johnson, he speaks his mind and all the over parties are trying to stop him doing his job, there should not be another vote the people voted out. What if I voted in the elections could I call a revote if I didn't like who was voted in. Labour stop messing the public about. Boris Johnson is the new Winsor Churchill. I have never voted Conservative but I will now because of what Labour is doing. The public as spoken, so let Boris Johnson DO HIS JOB.
07/09/19 Celest
4

The big lie in the Labour party is that they support the working class. I won't go into boring details about my upbringing but suffice to say I am from Bolton. A large proportion of Labour supporters seem to be middle class trendy lefties who have never done a days work in their lives. I have been a member of trade unions and they are run by a small group of extremist activists who just want to call strikes and disputes. They destroy jobs, don't care about ordinary workers and sponge off the state while the rest of us work, pay taxes and try to make ends meet. So,a pox on Jeremy Corby and all who support him.
03/03/18 Phil
1

Undertaker to the Socialists

Jeremy the Corpse has done it again. The Labour Party is now more or less dead and buried, along with its Mummy, the new pharoah. What we have now is a parliamentary Labour Party not deciding its policies through the medium of its elected MPs, the elected representatives of the people, but a party run by its National Executive, by Ken Livingstone and the Trade Unions, in particular, Unite, all unelected. The Corpse is killing off all dissent. Not even Stalin could have done more to take over.
10/01/16 Undertaker to the Socialists
0

The good thing is that whilst he is in charge Labour don't stand a chance. He is totally un-electable. Could you imagine him at the G8 in his cords with sports jacket and no tie? What an example we would be setting the rest of the world.

One thing I will say in his favour though. He does stand by his beliefs no matter how socially unacceptable they may be. You have to admire him for that......if nothing else.
10/12/15 samson
4

Too true, Samson, too true.

Were you one of those naughty people who joined the labour party just to vote for him? (I won't tell.) Must say I was tempted myself.
07/12/15 grumpyoldwoman
2

I am delighted that Jeremy Corbyn is the leader of the Labour Party!

I believe the real reason why so many countries are committed to smashing Terror organizations is caused by the fear that terror groups ( if joined together through religion) may just take over the middle east and control world oil supplies. These terror groups could then hold the world to ransom. Convert or else!!!!!!
02/12/15 Next
-1

The Tories have been trying for decades to achieve what JC is doing at this very moment, destroy Labour credibility.
29/11/15 Next
1

Put him out of our misery

This last week has fully demonstrated just how Jeremy Corbyn has succeeded in destroying the credibility of the Labour Party. He has posed no viable alternative to bombing ISIS. He wastes the nation's time on this critical matter. He deceives the young and innocent who know not the ways of the world.

He would not be missed

Corbyn seems intent on making our nation small and insignificant, unable and unwilling to defend itself against outrageous attacks like those which have happened in Paris. He shames our country. He is unfit to lead it. He has to be sacked. He is misleading the young voters into believing he is a liberal minded person with modern ideas about politics, whereas in truth his ideas are completely passé. He belongs to the 1950s type of socialism where the trade unions struck every other day, when ban the bomb marches roamed the country every weekend. He is not an Aneurin Bevan with original and futuristic ideas about how to reform the social services required in this our land. He is backward in his thinking. Where is the positive socialism he could be offering the nation? It simply is not there. Ergo I wish he was not there also.
19/11/15 He would not be missed
2

Out Now With Him

If you have a Labour MP in your constituency, tell them that they must sack Corbyn immediately or face the the consequences [your not re-electing them if you generally vote Labour]. Hit them hard in their pocket. Tell them they face the dole queue, and will be unwanted. Corbyn is completely unfit to be any kind of political leader in our country. His defence and economic policies belong to the Stalinistic era. Putin and other world leaders simply can't believe we have this buffoon as representative of our left wing.
17/10/15 Out Now With Him
0

Get rid of Corbyn

Corbyn is Nicola Sturgeon's lackey. He will destroy the country's unity.
11/10/15 Get rid of Corbyn
3