We should stop our hypocritical attack on Tony Blair for his alleged "Cash for Honours" activities - and do all we can to encourage him in this practice.

I am no admirer of this Prime Minister (or any member of his creepy Cabinet) but there is no doubt in my mind that selling peerages is preferable to the alternative:  Blair will have to go cap in hand to the Unions and beg them to finance the Labour Party again.

People are beginning to forget the 1979 Winter of Discontent when the Unions were Labour's paymasters and, as a result ran the country. Wildcat strikes brought us to our knees; our economy began to collapse and we could not even bury our dead.

New Labour are now 27 million in debt and if Tony Blair cannot repay this in any other way, he will surely be obliged to strike a one-sided deal with the Unions.  So its 1979 here we come again! 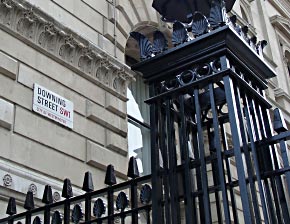 If we must criticise a politician for the "Cash for Honours" debacle, a better target would perhaps be Gordon Brown.  He is responsible for all the finances in the country and he expects to be Leader of New Labour and Prime Minister one day.

If he did not know how his party was being financed, he should have done.  If he knew about it and did nothing to correct it, not only should he not Become Prime Minister, he should step down as Chancellor as well.

The Market Economy of a Title

How much does an Earldom cost nowadays?

I want a full county earldom, a seat in the House of Lords, a grandstand view over the antiques roadshow.

When I was younger I always thought that money is everything. Now that I am older I know that it is.

They just seem to get away with everything they do and always bounce back. Archer (though he did some bird if you can call it that) and Mandelson too.

Well Well Well, yet more corruption amongst the life peers: money for amendments. What a sick constitution our country has. They say we benefit from not having a written constitution. Perhaps they haven't yet found a large enough piece of paper to write the cheque upon to pay for all of its corruption and deceit.
01/02/09 House of Turds
0

Who really gives a monkeys nowadays whether someone has a title or not?

Do we all feel so small, so inferior when confronted with one of these people with an appellation signifying nobility?

Do we always show deference to them by saying "Yes, your Grace"? "Certainly, My Lord"?

Let them flood the market with people with titles, even if they bought them. Don't allow them to sit in Parliament though.

The more poeple that have titles will eventually devalue the whole system, and they'll become as common as dirt.
25/06/07 Master of Dissent
-17

Sorry if this upsets anyone, but this whole "cash for honours" thing is the stupidest, most unhonourable way that Tony Blair could ever make money, apart from taxing!
Yes, I know that a long time ago (a few hundred years ago infact) this was how lordships and such other titles were dished out, but those days were all very unjust. But hang on, I thought we were living in a "developing Britain"?? In my eyes, Mr. Blair is only taking us back in time.
24/06/07 Alastair
-32

"I cannot tell: The world is grown so bad that wrens may prey where eagles dare not perch. Since every Jack became a gentleman,there's many a gentle person made a Jack...great promotions are daily given to enoble those that scarce, some two days since, were worth a noble!"
13/10/06 Gloustershire Sauced
-15

I think that this issue is only of real importance to politicians who want to make political capital out of each other.
Lets face it the House of Lords has no real political clout nowadays.
One of the few politicians that I admire is Tony Benn who was once Sir Anthony Wedgewood Ben.He had the courage of his convictions and rejected his peerage because he didn't believe in the peerage system.
22/08/06 Bob
-13

As long as its legal, what's the problem? People often pay for what they want or need and if they have the money so what. Cash for honours is just hype.
09/08/06 Gordon Brown
-21

Well said, Grouch, but can you imagine some of the people snapping the titles up? Richard Desmond, Duke of Ascot, anyone? How about Bernard Matthews, Earl of Sniffington? Read the rich list... and be VERY afraid!
05/08/06 Attila the Mum
0

All the titles and lordships should be for sale. They have always been so, at least for 400 years. That is nearly all the hereditary lordships, dukedoms, earldoms, marquis etc. were bought by the rich men of the latter half of the seventeenth century. These aren't ancient families as one might suppose, but just rich landowners who had a windfall.

The placenames that come with the titles should be up for grabs, like car number plates.

So to buy the Countship of Little Nothington should go for, let's say, Â£5,000

Arms, Symbols, and so on, all at extra plus VAT, and Stamp Duty.

As for "landed" bit, current market rates for the acre, in whatever neck of the woods you want the lordship to lord it over to be.

Transfer fees would be payable, on resale.

Other paraphernalia available at discount.