Gordon Brown Limited.  Everyday I see this mans face in the media and I always think what are we doing with this joke?  Seriously..  OK Tony Blair had his faults, but I was better off and never worried about my job, money, mortgage bills, that was never the case under Blair.  But now I seem to be very concerned about my future, and how I can pay the bills.

OK, the credit crunch is from the US housing industry, lending money to people that should not have received these loans.  Then of course oil prices go up to fill the gap and of course there's the Iraq war, but Gordon Brown was in charge of the UK purse strings for 11 years and not once planned for a credit crunch.

Also what about this whole 10p tax issue?  What I don't get is this, 'get children out of poverty' thing that he seems to bang on about, and yet he decides to abolish 10p tax? 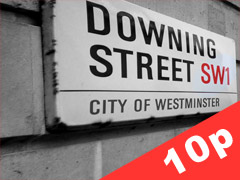 Now on to the 42 day terror detention issue; he puts his time and effort into making this go through because apparently voters want it?  OK, if they do then why not spend time and energy in lowering fuel duty, because we DEFINITELY want that!  Then bring back 10p tax, or better still nobody pay tax on the first 10K of their earnings.  Such a bold move would pull a huge number of people out of poverty in one stroke!

I just don't get this man at all.  His opinion polls have slipped and when he stops speaking and does this irritating thing with his lip.  I kind of find that annoying for some reason...  He reminds me of one of those cocky math teachers that aren't all that good at teaching.  That's just my thoughts on Gordon Brown.

Anyway, Labour ministers close to him seem like him for a reason and I don't know why?  From day one when Gordon Brown took over from Tony Blair, this country has been nose diving into debt, anti-social behaviour and chasing laws through parliament that quite frankly are a joke.  I really wish MP's would pull there heads out of there Butts and start listening to the public for a change!

"We're all in this together."

Oh you poor people. We are a netherworld where the NHS is about to be dismantled, and where fat kids will be loafing on street corners because the funding for their school sports has been withdrawn. People in areas of high unemployment, (most places north of Birmingham), will have to sweep the streets or clean graffiti off walls to earn their benefit. If any of these poor people are homeless, the government might consider building hostels to house them. They could call them workhouses! Home ownership is becoming a pipe dream for the ordinary worker, but Cameron and the rest of his millionaires row cabinet are more concerned with targeting the feckless council tenents. Right to buy anyone!
22/11/10 Biscuitbum
-20

My Only Wish is that Guy Fawkes was Caught just as he was about to Blow up the Houses of Paliament in 1605, They should have let him go and Awarde him a Medal for doing it,RIP Guy. In the 1990s he would have been known as a Hero
10/08/10 Yvemaria
3

The government has just said they are putting up national insurance, they also said that they considered putting up vat instead, but decided on the former idea,

So, if you already have loads of cash, you are lucky, its buying power is still there,

Personally I've never had a problem with lyres. Harps, on the other hand, now there's an instrument you can't trust at all!

I am always saying it all politicians are lyres and thieves when they are not kissing babes they are pinching there lollypops. So what as changed since robin hoods days? Well robin is long dead but the thieving sheriff lives on.
23/10/09 get it right
-7

MikeP,
I would like to point out that in your comment of 23-sep 21:26, You made the following spelling error
"the rich get riched"
It should have been "the rich get richer"
You see?
It happens to all of us.
Think about that next time you point out somebody elses errors.
24/09/09 Noyoulistentome
-4

e are all captive indentured

Is the market in which a slave is sold a free market?

How much of the capital value of a firm can be attributed to its labour force?

How much benefit do the workers in that corporation benefit from "part-ownership" of that capital? [None in my experience.]

In this world of globalised monopolistic corporations, there is no free market for labour.
23/09/09 e are all captive indentured
-10

There, in a nutshell is the crux of the matter.

How to define "too much"?

From the perspective of the beggar then perhaps someone who has £100 is too wealthy. From the other end of the spectrum - £40bn may not be enough.

Do you define "too much" as more than you have, or more than the 'average' wage, or some random number, or what? It is, dare I say, entirely subjective.

And as for the 'point' of wealth, well that is just the way it is, it was and always will be. Even in the depths of Soviet communism there were commisars and proles. Rich and poor. Powerful and powerless.

I am content to accept that inequality is a fact of life and, provided I never pass a (genuine) starving beggar on the streets of Douglas or Ramsey (and there are one or two) without handing over a donation (I always do) then I can live with myself.
23/09/09 Manx Hound
-9

What is the point of a single person having $40.0 billion wealth?

When is too much, too much?

When does wealth generation just become the simple looting of the resources of a nation or the world?

Is being super-rich being Green?

What justification is there for capitalism?

Capitalism tends to degrade into pure monopolism which is of no advantage or good whatsoever for the consumer or workers. It is the avowed aim of every corporation to wipe out its competitors, or to take them over.
23/09/09 Band of Brothers
-14

"As soon one class gets ahead it exploits the others. Generally the rich get riched and the poor get poorer, really poor"

ou brainwashed people are all suffering from brain haemorrhages. You have all had massive strokes.

There is only one way to run an economy and that is fairly. As soon one class gets ahead it exploits the others. Generally the rich get riched and the poor get poorer, really poor. The average wealth of a person in such an economy is far, far poorer than in a sharing economy.

It stands to reason that our nasty, greedy Thatcherite economy has gone far too far. Our lazy good for nothing aristocrats have had it too good for too long.

It's called communism and whilst in theory it has some merit, it has been proved in practice to be unworkable as it goes against the basic tenets of human nature and interaction. It was a failed experiment which costs the lives of millions through war, poverty, and genocide. It blighted countries across the world and many are still suffering as a consequence.

All you little pocket socialists, weirdos and lefties need to catch a wake up and understand that the class system, wealth and poverty, slavery, whatever you like to call it, is here to stay.
23/09/09 MikeP
-16