Pity the household where table and bookcase surfaces are bedecked with Star Wars Republic Fighter Tanks, Indiana Jones and his Lost Tomb, and Spongebob Squarepants Good Neighbours at Bikini Bottom.  Surely the DVD player and TV screen are the natural home for those sorts of toys (much more compact for a start).  The one positive in all this is the excuse I have to refrain from dusting, lest the delicate models be disturbed and stray pieces be displaced into the path of the vacum cleaner. 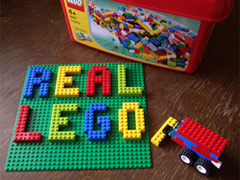 Woe betide any adult who dares to suggest that models are disassembled and fashioned into something original.  No, Lego play is now about completing sets and placing trophies on display, as if to demonstrate the instruction following abilities of the maker.  What ever happened to using good old fashioned imagination?

It's well known that, weight for weight, Lego is more expensive than gold; Even so, the Government should combat this nonsense by applying high rates of tax to Lego kits, while reducing the VAT on straightforward Lego buckets.  In fact I'm confident the Secretary of State for Education and the Chancellor of the Exchequer will implement this measure.  They look like the sort of people who would have played with proper Lego in their youth!  Look out for the e-petition at number10.gov.uk.

Aren't rather judging on your everyone on your, apparently rather unimaginative, offspring?
Visit any of the numerous Lego exhibitions (once things like shows return), there are plenty of very imaginative and innovative models, which children of all ages making them.
28/12 Timelady
1

Lego has suffered from the triumph of marketing over contents. First the smiling local people in the kits were replaced by scowling and snarling 'action figures' with weapons. The more complex electro-mechanical kits that you could learn from and your father could help you with, gradually disappeared. There are now fewer general boxes, and many more themed kits, full of specialised bits that are useless for any other construction. Thus imagination and creativity has been choked off in Lego, and replaced by movie tie-ins. Poopa is right, the educational ideals have been trashed in the drive for more profit. The stuff wasn't cheap before. Now? Most of the benefit has gone, yet the cost is unbelievable.

I'd love to find out exactly how these changes came about, but this is very difficult without a knowledge of Danish.
04/06/09 onetwofoursixeight
-26

Well said Mallory - today's Lego is definetely less stimulating for the childish imagination. All those figures and pieces with a specific function restrict what a child can do with the lego. It's a bit like computer games in one sense - all the imagination is someone else's, not the actual child's! A pity! Some things should just be left alone, but some people cannot just leave alone!
12/03/09 miserablemoaninggit
-3

I used to love Lego when I was younger, but it definitely isn't as good now. All those kits you can buy now may look nice and flashy, but they don't stimulate the imagination as much as a big bucket of miscellaneous pieces used to do. And why is it so expensive??
06/03/09 Mallory
1

You are right, in the 60s you bought a set, built houses or veichles, broke them up a few weeks later, and put the set away for a while, if you lost the instructions it didnt matter, you had the bases, bricks, doors, windows, and roofing blocks, all you needed to make houses, and all the other bits to make veichles, but nowadays you buy a set and it will usualy be a model of some spacecraft, tv or film veichle which once dismantled and instructions lost, wont get played with again.
we bought the children the harry potter train and bus, but they got broken by visiting children and bits got lost, and they wont be seen as models again, we also have a six foot long lego street on one of our windowsills, built on the edge of "road bases" each house alternating in colour and hight, measuring eight studs by eight studs and aproximatly eighteen inches high, absolutley rammed with doors and windows, it would cost a fortune to go out and buy that lot new, thats if you could, but thanks to carboot sales you can pick boxes of lego up quite cheaply, taking out the bits that you need, like bases, doors, windows, bricks and tiles, not forgetting the veichle pieces, and usualy get your initial outlay back on the remainder next time you do a carboot yourself, with these bits the children can use their own imagination and build decent models without the need for any instructions, its a good toy that has stood the test of time, as a kid I had the short lived betamax lego,(betta bilda by airfix) which just consisted of house building pieces,but I was happy with that in them days. forty years later, my children love lego.
In my veiw a valid gripe, away from the forthcoming depression, where we may resort to playing lego with the children by candlelight when the lights go out and the playstations are off.
24/02/09 Gainsborough lad.
-1

Well no, Lego is not what it used to be but name one thing that is. As long as the kids enjoy playing with Lego does it really matter if it sits on the shelf for a bit as a constructed model kit?
06/02/09 Mark Taylor
-33

Come on guys, everyone is entitled to gripe about whatever they want, even if it is the use and function of the humble Lego brick. Actually the only thing that bothers me about Lego is when you stand on it with bare feet. Ouch!!!!!
04/02/09 Sandy
4

Well Rik Green, what an I say, indeed lego is a fantastic Item for young and old at heart, I have read your piece with interest and all I can come up with is that you are a very strange person indeed, you seem the kind of person who would sit through an entire programme on tv, then write to the bbc and complain about the use of foul language, or buy a house near heathrow and then complain about the planes, for god sake, there are more pressing issues in the world then lego. heres an Idea, next time you feel upset about somthing, watch the news for 30 minutes, and after seeing all the suffering and distruction in the world, then maybe, just maybe, your world is not that bad after all, and you will see that Lego is a brick, to be turned into somthing, either a model of the x wing fighter of big ben, it does not matter, what does matter is people like you should just smile, shrugg there shoulders and continue with life.
04/02/09 slysocks
8

Don't buy it. Don't go to Legoland. Watch the Danish building industry and its economy collapse into the Kattegat.

Get the kids to join a real youth club - a street gang - where they'll learn a useful trade like mugging little old ladies in the street, drug trafficking and other import/export trades.
02/02/09 Key Largo
37

There are a lot of things "not what they used to be" and Lego is probably not the most important thing in the world right now. Whining kids though, you've got to love them, haven't you?
02/02/09 Seth
3