We mustn't teach our kids to be British.  How silly is that?  Is it just me,or are we as a nation allowing ourselves to be converted to "barmy-ism"?  According to the newly elected chairperson (groan) of the NUT (what a perfect anacronym), it is undesirable and dare I say it RACIST to teach compulsorily all immigrants the values of "Britishness".

It is precisely this "Britishness" that has welcomed all creeds and cultures into Britain.

Hang on a minute there.  It is precisely this "Britishness" that has welcomed all creeds and cultures into Britain.  Why would a foreign person wanting to come and live here desire anything other than and tolerant understanding (by comparison) community?

Britishness in its original true form has shaped the world for hundreds of years rightly or wrongly, depending on your view.  But that aside, any foreigners coming to live permanently in this or any country for that matter, need to understand the ways of that country. 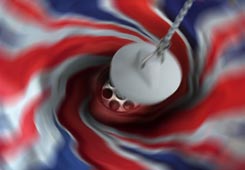 I was a foreigner myself where I worked and lived in Saudi Arabia around 25 years ago.  I needed to know their ways and adapt, otherwise I would have been deported or possibly something worse.  Also, I wonder why the Prime Minister of Australia John Howard is re-elected with such regularity.  Could it be something to do with his no nonsense approach to immigration?  Australia welcomes all, but this country has values and laws that are for Australians.  You are welcome to live in the country as long as you abide by them.

Are we British really that bad?

When are we going to get a politician in this once great country to stand up and be counted?  Why should we not teach these values to all our youngsters?  Are we British really that bad?

As a Romany Gypsy (whose ancestors have lived in Britain since 1501 AD) I, and many others from my ethnic group avoid these so-called British customs, since they are dangerous. These British customs include:

(01) - Binge drinking, vomiting on the pavement, and fighting and attacking innocent people when the pubs and clubs close.

Not to mention how Britain has become a nest for Islamic terrorist.
There is no British culture.
25/03/14 No culture
0

It seems that British Law is not even an expectation in some sections of UK society, apparently in the West Midlands, according to the Chief Constable of the West Midlands police in the news today.

Is a good thing innit, cuz too many Brits think you can just take what they want to tak, just like during the Empire days. Btter now that Europe rules, and British "values" (being better than others, ha ha!) isn't allowed by Brussel. W're all Brits now, even me who came from Largazia when I was just 11. Get over it i say. I obey all laws and spens my share of benefits to help taxpayurs so that's OK.
18/01/14 Joe the frog
-1

as long as your alright

The English have a small island mentality, We buy a new car to upstage the neighbours(Why do we think we are better than everyone else)! Lager lout 18 or younger little knobheads who think its acceptable to damage people s property on the way back from the pub, people who let there brats ruin people s evening out by letting their kids run around screaming, BUT I still love England.
30/09/13 as long as your alright
0

Yes and only Americaness is taught to kids nowadays. They all like McD's, American Idols, New York stuff etc... I bet basketball and baseball will be the next big thing in Britain.
16/05/13 Dave
-3

Do twerps look for sites that do not appear to have a resident twerp, then fill that gap? or are they just random visitors that move in to a vacuum & cause a pain in ones @rse? I hope it is the latter so the G,O,t,Ws most recent twerp will move on sometime soon.
04/08/12 Boblet
-2

What is Britishness? Britishness used to be about politeness, gentlemanly behaviour, being inventors and authors, creating and writing masterpieces like th Harrier Jump Jet and Shakespeare. But that was so 19th, early 20th century and pretty much all of this is being done by European and not Britain. I always respected the old Britain and how they came through the 2 wars and how the masters at Bletchley Park created the Enigma Machine to break the German ciphers and the industrial revolution with manufacturing, textiles, mining etc.

Britiain now is a cesspit confined to an island like Alcatraz were kids go around smashing up shops, sratching and throwing eggs at people's cars, happy slapping and beating up and frightening old people. The place is ridiculously expensive were people live in homes the size of a match box and drive a leased BMW that they think makes them middle class. No respect or social conduct in society, very individualist (me me me culture) and capitalist. They don't make things anymore, import everything from abroad, I mean everything.
The police are no where to be seen in the city centres when everyone is throwing up their dinner and 3 bottles of vodka on the pavement at 11 in the evening to find a man in a suit slipping into this mess when running to work the next morning. I have seen this happen numerous times.

Need I go on, I can write an essay with numerous examples about why Britishness is just a myth to cover up the massive, astronomical issues in their country. It's funny because it is so easy to fix if kids were actually brought up properly with the right values and not handed an xbox to shut up, if the government brings in more discipline in schools and on the streets, if people were much nicer to each other and showed some respect, obviously comes back to the issue with parenting and the government actually created incentives for good, decent citizens to do well and prosper and create disincentives for thugs to go around causing mayhem and actually stamped out this behaviour when they were younger.
25/07/12 Jason
-7

That would be the empire when children worked in coal mines and cotton mills.

A vast generation of wealth for the upperclass and land owners.

I don't think you can define 'Britishness'. Britain is, let us not forget, four countries, and I find it hard to give British people proper "values" and "stereotypes".
25/02/11 Cathy Anderssohn
-13

Now, let's think, why would anyone not want to live in Britain? Does it give you a clue if I just pluck a few ideas from the air? Rotten schools and desperate teachers? Rotten hospitals and demoralised doctors? Unbridled immigration? The biggest prison population in Europe and still there's not enough room? Vicious national and local government that thinks nothing of victimising those members of its electorate who have the misfortune to be British and white? Rampant crime and disorder in our city streets? A demoralised and ineffective police force who know exactly what to do and how to do it, but aren't allowed in case they infringe some criminal's rights?

Is britishness getting drunk on thurs days ,fridays,throwing up in the street,fighting,thinking its funny to swear,damage peoples property on the way home,I am 42 years old & love the uk ,why would you live anywhere else? british people have a cracking sense of humour,love footy,going to the pub on sunday.BUT this country is full of some serious twots
17/05/10 love being english,not ashamed
0

This country is full of complete idiots, I blame the education system and the media outlets for filling their heads with total nonsense.......
01/05/10 bla bla
-6

You Sir are a fool, that’s the problem with the internet; idiots get too much opportunity to voice blinkered liberal views.

If a family simply moved in and then imposed their cultural rules upon your family home YOU would be INFURIATED, yet it’s OK to take place, just as long as it’s outside your doorstep and doesn’t DIRECTLY effect YOU and even IF damaging your nations whole history and structure.

Yes YOU will only realise and complain once it’s walking up your particular driveway and has finally to come along to change YOU’RE (Mr ABC's) home.

You’re a genius...and a traitor.

Shamima Begum shouldn't be allowed back in the UK