Oh no, itâ€™s school run mum (or dad) with their 4x4, taking the kids to school; what an absolute nightmare they are!  I see them every day on the way to work in their 'off road' vehicles, dropping their little darlings off at the school gates in their "4x4 school bus".

I have no issues with the fact that they drive their kids to school, and in the world we live in today with so many downright nasty people around it's probably a good idea.  I know that I would probably do the same if I ever had kids.  I'm not even having a go at them for the type of vehicle they drive either, although it must be said, a four-wheel drive monster is a bit much for the school run.  It can be such a good laugh watching them playing dodgems with the other parents outside the school gates.  Surely the small economical family car, or even a people carrier would be much more sensible?

Actually, my problem with these people really has more to do with their general attitude, and the lack of consideration they show others when driving to and from school.  They roll up every morning, park right in front of someoneâ€™s driveway and then proceed to unload all their kids.

School run - woe betide anyone who gets in their way

By this time all the doors to the vehicle are open preventing other traffic from moving freely up and down the road.  They then just stand their and have a good old gossip with one of the other mums, meanwhile little Johnny and his siblings play right in the middle of the road with their school chums.  It is chaos I tell you! 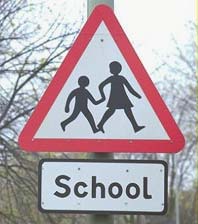 Personally, I would hate to live right next to the school as some people do, and to have to witness this zoo every morning.  To make matters worse, once theyâ€™ve dropped off the children, that's when they suddenly decide theyâ€™re running late themselves, and woe betide anyone who gets in their way!  This is when I most often encounter the school run mum.  Driving down a road with parked cars on either side, itâ€™s a game of chicken.  A game I always loose, because theyâ€™re so up their own backside they donâ€™t think about anyone else.  Charging straight at you, regardless of the fact that the parked cars are on their side and theoretically itâ€™s you that has right of way; you are the one who always has to pull up onto the kerb to let them pass.

They are just so selfish and rude!  I often feel like taking a different route to work just so that I donâ€™t have to deal with them and the traffic jam they create.  Please, letâ€™s bring in the big yellow school buses so we can get the school run mum off the road?

My opinion is that he is being very selfish. For parents take their children to school for their safety.
18/05/13 Karen
-8

I see either Blond pimples no higher than the wheel driving massive 4x4 or lanky goofy ugly skinny headed men, they are tail gaiters and antisocial on the road i think the power goes to their pin heads
17/01/13 Warren
-3

Zyrcona you are an idiot!! Some women have wrecked their pelvis giving birth and can't work what on earth has that got to driving a w@',k*€r chariot? Can't they drive something else instead?
23/05/12 Lottie
-8

"I drive a Hummer"

You don't really do you. More likely would be a Vauxhall Zafira Shitbox or a Vauxhall Meriva Spasti-Bus.

Zyrcona/Jumbo. 4x4 vehicles are vehicles driven by idiots who think it gives them a bit of status or bully power. To try & justify their use in this country is silly. There are rare circumstances when their use might be justified, taking the kids to school is not one them.
PS Zyrcona you know nothing of suspension.
15/10/11 Boblet
-3

Some women I know who have children have wrecked their pelvises giving birth. This makes it harder to walk, hence the need to drive. Only where I live, it seems a cement truck went down the road depositing dollops of its load on the public highway. I did try to complain about this, but I was told it was a 'traffic calming measure'. Anyway, this necessitates the driving of an off-road vehicle with suspension designed to cope with uneven terrain. QED.
15/10/11 Zyrcona
-6

4X4 are no bigger than "normal cars" they are just Higher up. I sold my Land rover which fitted on the drive, but my new VW passat only just fits. And also it drinks about the same amount of diesel. Its a big myth dreamed up by the politician's to divide and rule the motorists.

A land rover can last up to 30 years if treated well, just imagine the carbon thats produced by making all those little cars that are replaced ever year or two by the owner. The scrapage scheme did more to harm the environment than any 4X4. Open your eyes and look at the bigger picture.
15/10/11 Jumbo
-7

4x4 parents are rediculas in my oppinion. If they are in a car like that they are more likely to run over and kill a child. They are killing the environment yet are the same people who insist on organic bags for carrying food and recycle cansand bottles. Why not just NOT drive the gas guzzling 4x4 and then you wouldn't need to worry about little William's asthma or little Imogen getting run over at the school gate.
25/08/11 Just Think
1

These people will often quote safety as justification for using these antisocial and unecessary vehicles. I ask them one question: If, heaven forbid, your child was knocked over by a car, which type of vehicle would cause most damage? I rest my case.
03/06/11 Gerald
-6

Drop off time outside a private school

Horrible mums at the school gate