Just when I'd come to terms with idiot pavement cyclists, a new danger has arrived - kids on scooters.  You know, those metal things with handlebars that kids love to pick up and swing around in the air before slamming them down hard on the pavement.

Anyone unfortunate enough to get in the way would be seriously injured.  Most of their parents just look on indulgently, without any attempt to stop them using what amounts to a dangerous weapon in a crowded place.

five young teenagers sped by on their scooters, giving pedestrians less than a foot of clearance

Just yesterday, I watched in horror as a little gang of five young teenagers sped by on their scooters, giving pedestrians less than a foot of clearance.  If any of the shoppers had changed direction or put one of their hands out, they would have been seriously hurt. 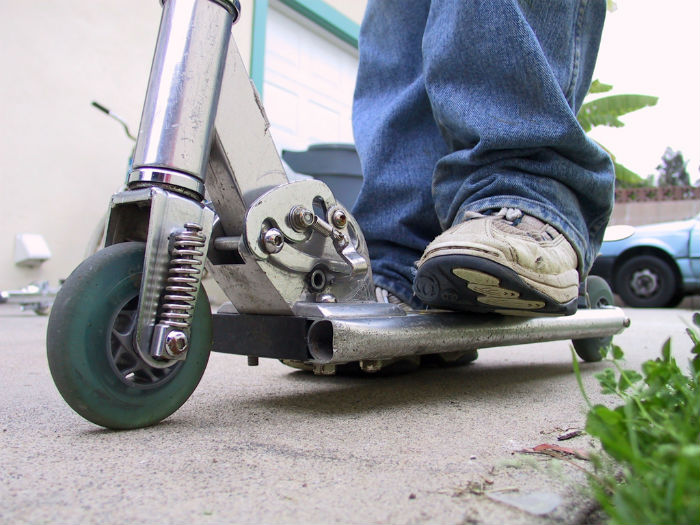 One little boy "undertook" an elderly lady carrying two bags of shopping who was walking near the kerb.  How he ever managed to get between her and the kerb defeats me.  The slightest movement by her would have caused an accident as somebody would have fallen into the road, in the path of fast-moving cars.

It's scary and intimidating for people who are walking - they can't see these scooter riders coming up from behind.  Elderly people can't always hear them and they certainly can't be expected to move out of the way in time.

There are times when we are chatting to friends without realising that someone is swinging a heavy, metal object very fast and right behind us.  I think these metal scooters should be banned in crowded public places.  Just because they are seen as kids' playthings doesn't mean that they aren't capable of putting someone in hospital.

@Dead and buried 'Get a life' is clearly a favourite phrase of yours - no prizes for guessing the newspapers and TV shows you subscribe to!
24/07/14 marmalade
0

kids on scooters should be sent to workhouses to get a life and their parents should spend a fortnight in the local nick to think about their parental responsibilities.
24/07/14 Dead and Buried
0

@The old codger, You are quite correct, I must admit I had not thought it through sufficiently.
24/07/14 Working and taxed.
0

Yes its just like The Old Codger says. On the smooth marble type floors in shopping centres these scooters go far faster than on the pavements. These kids are not staying next to their parents as they walk along. They are speeding ahead. Weaving in and out of other shoppers. To them the faster they go the more fun they have. Their parents are left behind so have little if any control of them.

In my local shopping centre there is a coffee shop which is very popular and it is not at all uncommon for the parents and their adult friends to be sat chatting while the child on the scooter goes in and out and round and round the tables.

These are often young children about 4 years of age. They have little concept of how dangerous their actions are. It is just fun to them. They do not realise that there are people carrying trays of hot drinks. If the child ran into someone they could be burnt and/or the person injured.

It is not a playground and they should be banned before a serious accident occurs to the child or other people.
24/07/14 Maxie
0

Actually modern micro scooters can get up a fair speed unlike the scooters we played in the park with as children. I think you are missing the point that they don't belong in crowded places and that the smooth polished floors of supermarkets and shops meant that they go a lot faster than on pavements and outside paths.
23/07/14 The Old Codger
0

"unless, being blind you have developed super-enhanced hearing skills"

@Maxie, in fairness, I don't think they go as fast as you think they do - after all, sound can be rather deceptive (unless, being blind you have developed super-enhanced hearing skills - it does happen) These scooters have no engine, unlike the disableds' ones do.
23/07/14 Working and taxed.
0

I am blind and kids on scooters in shopping centres or supermarkets are a nightmare for me. The kids get up to an enormous speed on them and it is impossible to hear them coming until they are on top of you.

Its no joke at all to be nearly tripped up or run into. If you think it is then why don't you try a blindfolded walk in a shopping centre with more and more children on scooters coming at you and see how you feel.

They should be banned immediately before someone is really injured.
23/07/14 Maxie
0

Scooters are not suitable for supermarkets and indoor shopping centres. Marble floors, escalators and children with little sense of danger are a pretty poor combination. There's nothing wrong with kids learning that what's appropriate behaviour for a park isn't appropriate for a supermarket. Their parents could do with learning it too.

Easy for someone to make dumb remarks about meteorites but why shouldn't the elderly or blind feel fairly safe in indoor public places?
22/07/14 Chris 2
0

On these sorts of forums it's best to not encourage those who attack the poster rather than comment on the topic of the thread.
21/07/14 The Old Codger
0

Old Codger. Are little darlings on scooters the biggest threat to your life at the moment? Are you worried about meteorites landing on you too?
21/07/14 Fred E
0

Children have always played on scooters in parks and on pavements near where they live but , as the OP suggests, it’s different if they are whizzing along in busy shopping streets.

Recently though, I’ve noticed that parents are letting the little darlings scoot about indoor public places like shopping centres, cafes and supermarkets. This is surely dangerous for both the child and everyone else.
21/07/14 The Old Codger
0

The Japanese cycle on the pavement slowly, sensibly, and with respect for others, not head down at full speed like the Lycra Louts in UK. Big difference.
20/06/13 Friday Lunchtime
-12