Is democracy a system we really need anymore?  For a long time now, our parliamentary politicians have become steadily more useless, steadily more corrupt and greedy.  The wishes of the public are continually ignored and while we seethe in frustration, our politicians award themselves handsome pay increases, inflated pensions and peerages to ensure they are suckling at the political cash cow until the day they die.

The wishes of the public are continually ignored

We allegedly live in a democracy, yet in truth; a vast majority of the voters in this country either failed to vote, or voted for a party other than New Labour in the last general election.

We are supposed to have a secret vote, but this isnt true, everyone has a unique poll number and that number is logged on a vast database so parties can target potential votes and assistance the next time round. 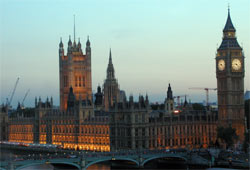 But look at the alternative:

Dictatorship: A dictator will, against the will of the people enact laws to suit their own ends.

A dictator will pass statute law that decreases the rights of the people with free speech, freedom of movement and freedom of thought.

A dictator will ensure that those close party members or financial backers will receive unearned rewards.

The incumbent politicians of this and previous parliaments have continuously eroded the democratic principles to such an extent; we can scarcely recognise the country that our forefathers fought two world wars for.

If were going to be honest, lets just drop the pretence and get ourselves a dictator, any flavour will do, but at least well know what weve got.

oh yes it most certainly is a dictatorship. Social cleansing has been in full swing for years.

The UK is an outright dictatorship, the government, the councils all routinely ignore what the public want or need but then I’m a few months ask for their vote to change things for the better. Change what ? Nothing changes except the faces and names. It’s still business as usual carve up everything abuse the people to the maximum and then turn around and say that’s life!

We are governed by assholes who’s only goal is more power more money more respect. It will promise the world and only deliver for the few that are in the same mindset as them re: the 1%.

We as a nation are already on a road to self destruction and profiteering. Political correctness can stick that up someone’s Ass. Rules are manipulated into such a way that makes it legal. Mental health is only a word that hopefully wins more votes and donations. On one hand the government say we need to do more about mental health issues, and with the other hand forces people to live in squalor and no money. MPs are landlords and are continually raping the country of everything they can sell or give to their friends at taxpayers expense. Austerity is a legal term to carve up the country and sell to foreign investors. Social cleansing is to force people to live in tiny apartments or worse no apartment at all. Soldiers are asked to fight for their country and then literally thrown on the streets when their no longer wanted. A migrant has more rights than a natural born English man or woman.

Yes we live in a 2019 dictatorship, the public have no rights, we are monitored 24/7 by cameras and surveillance. We disguise this as safety for you the people. Crime is riff on purpose. If the people are scared to go out then they can be controlled, if people are scared governments can get on with backroom deals and faces in the trough of what they call progression. As a nation we use to be world leaders in manufacturing. Now we sold everything in favour of the stock market. People can no longer afford to live, to buy a house as prices have been inflated on purpose for more money. We can complain but not listened to, what’s the answer I wish I knew.

I have lived in this country for 71 years and I can not remember a time when we have been told you can not do this or that. If I want a cigarette I will have one, if I want sugar I will have it. It’s time that the so called government listened to the people who put them in parliament and not follow their own ways. We might as well get rid of parliament all together because from what I have seen it a way for most of them to line their pockets. Lastly if Hunt is such a brilliant ENTREPRENEUR as he likes to keep telling us he should know better that the people are the ones who elected him.
Do not forget also that most of these so called wonderful ideas come from the boys in the back rooms and will also cause less revenue for the country as a whole.
23/07/19 Jobe
2

I find it very strange that the EU has allowed the UK to participate in the EU elections knowing that the Brexit party MP's army will be landing in their camp to kick the crap out of them.
20/05/19 Brexit Rules
4

This shows how terrified the EU is over The Brexit Party that will soon be in their camp in numbers. And they should be because Nigel F is showing people how corrupt the EU is. Nigel Farage speaks out loud what the British people want to say but are not being listened to.
19/05/19 Jethro
2

There was a time that I can remember when the UK was admired for it's democracy, self discipline and self respect, now the rest of the world is laughting at us for what we have decended into. Too many rats in the barrel.
17/05/19 Jethro
3

Desperate attempt to win support for a dying party. What will be the Tories counter-response, something as ludacris I suspect. The political two party system in the UK is now showing the rest of the world that the lunatics are in charge of the asylum.
11/05/19 Jethro
0

British politics, ever heard of the winky-wanky bird ? it flies around in circles until it disappeares up it's own asshole. Torys and Labour, enjoy your own colons.
04/05/19 Jethro
8

Heckler to Theresa May: 'We don't want you'

TOOTHLESS MPs DICTATED TO BY EUROPE ALWAYS BLAME EUROPE FOR NOT BEING ABLE TO DO THIER JOB PROPERLY EASY WAY OUT FOR THEM.LETS GET OUT NOW.IF DOESNT HAPPEN DEMOCRACY HAS GONE IN THIS COUNTRY
14/12/18 CHURCHILL
6

if i am not mistaken we already are, we vote but our votes do not count anymore and laws get passed everyday without any information or reason apart from benefiting who sets them most lily due to making more money.

Nothing the government do anymore benefit the people and usually come in a a new tax or influx of an old tax.
06/08/18 SmokyBandit
2

This article is very true, an elective dictator is the perfect terminology to describe the politics of the once Great Britain. Just look at the way in which fluoride is used as a mass medication to control the mind of the population by adding it to tap Water!
23/04/18 Gmo2018
-5