It is time this government went.  In fact, in the UK it is time the whole political system was overhauled to do away with the timewasters, the politically correct nonsense and the unfair and ineffectual policies.

If you look at many of the gripes on this site, you'll see many people in this country have a similar frame of mind.  Firstly, the harder you work the more you get shafted.  Secondly the less you do or are prepared to do for yourself, the more the government will reward you for your laziness.  Thirdly, the laws in place to govern this land are outdated and the legal system and politicians are unable to keep up with this mess of a society they helped to create.

How's this for an idea; a party that is based upon common sense, best practice (modelling against successful political systems) and rewards the right-doers in society; a party where greed and personal betterment is set aside in favour of gaining by helping others, working collaboratively and being more community rich.  However, in this case the proof would be in the pudding of decent policies fairly carried out rather than empty rhetoric poorly executed.

Thatcher's Britain has left a legacy of personal greed

It seems to me that Thatcher's Britain has left a legacy of personal greed, hostility towards others, and has stripped this country of what were once its proud assets (and many other negative things besides).  That was the start of the rot and it has just got worse year upon year.

Personally I choose not to vote as I have no faith in any party to govern this country morally or correctly and I view the political system as inherently flawed and corrupt.  I believe when voting that a vote of no confidence should be allowed to be registered.  Many of us dont vote simply because we do not wish to be responsible for the abomination that will form the new government.  I am proud of the fact that I never voted for Thatcher, Major, Blair or Brown.  I would only have myself to blame for this mess if I had!  I hear you say, 'would you prefer anarchy then?'  In actual fact I would prefer not to vote at all if I don't want to choose to be governed by any of the available options. 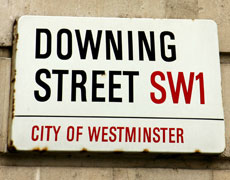 It is time for a change and no, that doesn't mean the Tory party should be our government instead of the labour party.  That is exactly what people will do though, not because they believe in Tory policies, they will simply get the Tories in because they don't want a Labour government any more.  Then the Tories will of course screw up again and people will want Labour back.  We are going round in circles with no other serious rival to those two parties at the present time.

Lets get real, this is not a democracy (where are the referendums and Mr Browns election this year?). Where are our rights to privacy, peace of mind or fairness? Ill tell you where absolutely NOWHERE until things change significantly.

Boblet, no idea what you're doing, but I suggest you uninstall whatever that is.
28/11/20 Kenny (Site Admin)
0

M.M.G. I used the word Christian to get a point across. I attended a healthy cooking lesson the other day in a local Baptist church. The cook/Teacher was a muslim woman. She recited a poem she had composed. I am normally passive where religion is concerned but within her poem she referred to al ah, albeit obtusely. That is what is happening. I blame myself for not standing up to her. The slackness in our attitude to religion is being taken up by sly zealots who push islam at every opportunity.
23/10/14 boblet
0

Great Christian Britain? Apparently, if current trends continue, Islam will be the most dominant religion in terms of numbers of adherents within the next generation.

I see the pendulum swinging right back in terms of gender equality and gay rights - both of which I absolutely and fully support.

I must confess that I find the increasing Islamic population somewhat worrying. However, having said that most Muslims I've come across are very pleasant people, although I've never spoken to a Muslim woman covered from head to toe and would not want to. The only prejudice I've experienced from a Muslim was when finishing a conversation with a Muslim man in Manchester who claimed he represented liberal Islam, but stated that he had to 'draw the line' when it came to s ex outside of marriage and homosexuality. He insisted on shaking my hand with his left hand; I didn't know what this meant at the time, but I do now. The irony of it!
23/10/14 miserablemoaninggit
0

S(D) I believe in Government. I believe in Democracy. I reject firmly liars. I am of the opinion that being dishonest to win the hearts of honest people is wrong. It is a corruption that I will not be part of any more. You cannot be a bit dishonest and expect to be honoured by office in this Great Christian Britain. Some countries have baksheesh as their way. I do not want it to become ours. I hope Thatcher who was the mother of it all turns in her grave.
23/10/14 boblet
0

I firmly believe that if you do not vote then you have no right to complain about the government. You give up that right by not bothering to have a voice when it mattered.
22/10/14 Samson (Delilah's too busy to post)
0

I agree Boblet - the way the government speaks to the people, is as a kindergarten teacher speaks to her charges. they blame the Labour party for every wrong, use divide and rule tactics, all smoke and mirrors really. The worrying thing is, so many people are happy to go along with their rhetoric, and are to ignorant, or too apathetic to look a little further, and to form their own opinion - with the internet, there really is no excuse for this political inertia.
I am not saying the Labour party is without blame - far from it - however the current party should be focused upon putting things right, rather than petty point scoring.
Oh well, same time tomorrow then.
22/10/14 collar
0

For the most part, I agree with you boblet, although will summon the energy to go out and vote Ukip come next May . . . reluctantly within the context of the failure of the 2 main political partys namely Labour and the Cons/LibDem.

As for your challenge, I must confess that I cannot name any such person.
22/10/14 miserablemoaninggit
0

George Osborne makes £320,000 from speeches in one month