Why do politicians insist on focusing their efforts on saying how bad the other party is instead of saying how good their party is?  It's very negative and quite frankly probably puts their potential voters off.

It may be a sad indication of our society that voters only remember and understand the bad things and the mistakes, so maybe that is why the major political parties like to concentrate on them?  It really annoys me when a politician is asked a question about how they would solve a particular problem and instead of answering it with the details of how they would solve the problem, they go on about how the other party hasn't solved the problem!  If you've ever watched a house of commons debate on TV you will have noticed that more often than not they end up as a public slanging match. 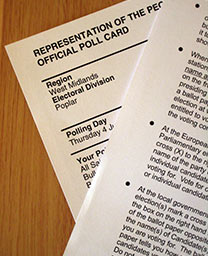 I even had a local candidate come to my door once and he asked if he could have my support in the election.  So I asked him what the benefits of him and his party being elected would be to me.  He did not even attempt to answer other than to go off on one saying how bad the current administration was.  I was happy to therefore say 'No, you cannot have my support in the next election.'

I am not really loyal to any political party.  I vote for the one who can do the best for ME at the time.  I make an informed choice based on their published policies (read as promises).  If they can't tell me what they can do for me (or the country for that matter), then I will not vote.  Highlighting the bad points of the other party is not real campaigning in my opinion.  So listen up all you politicians out there - please stop it!  You are annoying and it doesn't win votes!

It is extremely chidish behaviour and if a board of governers worked in this manner we would all be appauled.
08/01/10 GM
-5

I'm fed up of Britain's politicians. Sometimes I wish we were ruled by vigilantes instead. At least we'd have safer streets if troublesome yobs got their just desserts!
31/07/09 Terry
-13

I think the politicians should stop arguing and concentrate on the things on which they largely agree; such as public services and a fair Britain.
22/05/09 Terry
14

They also need to change the rules for claiming expenses. The reputation of MPs is on a downward slope. Instead of wasting the tax payers money on dvds, new lightbulbs etc. All the hundreds of thousands of pounds saved could be used to lower Council Tax. Are we the only country in the world to pay so many taxes? Income tax; council tax; road tax; tv licences; inheritance tax it gets more and more ridiculous. I object to paying inheritance tax why should others profit again? I want my family to have a better life but it's all tax, tax, tax. Lately it seems to pay for: bailing inept banks out; wars and now I find out I've been paying tax to keep money grabbing MPs in the good life; the Royal Family are millionnaires because we've kept them in this lifestyle for centuries. Wouldn't we all like to live in such luxury!
12/05/09 Tax payers we're being rip
-12

I agree with this gripe entirely. British politics has become deeply negative, it's all about disgracing the opposition, until eventually it becomes apparent nobody has anything positive to say about themselves. The exception to this rule has always been the Lib Dems, who although a small fish in a big pond, are at least constructive and positive in their policies. Meanwhile Conservatives and Labour simply feast on each other's faults ad nauseum.
11/05/09 Time For Change
-5