I wish to gripe about the individuals who threw eggs at the BNP leader, during a press conference following the their successful election to 2 European parliamentary seats.

Now first let me say that I neither vote BNP nor support them in any way, shape or form.  Nor do I agree with their openly racist policies.  But the fact is we, the electorate, as a whole, are responsible for their electoral success.  The people throwing eggs, should in fact be throwing them at themselves, because it is we, the public who propelled them to such heights.  People in glass houses should not throw eggs.

Like it or not, the BNP won their votes fair and square.  They did not cheat, they did not force anyone to vote for them.

I wonder how many of the egg-throwers actually bothered to vote for an alternative party?  In my opinion, if you did not vote then you have no right to complain about the winners or losers of an election. 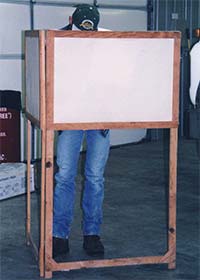 If you did not want the British National Party to get in, you should have got off your backside and voted for someone else.  Anyone else.  Even a vote for the Green party would have cancelled out another persons BNP vote.  A large part of the blame lies with lazy, apathetic people who cannot be bothered to put an 'X' in a box, yet somehow find the energy to whinge and protest at the outcome of an election.

In fact they could almost be considered a "single issue" party.  Obsessed with purging Britain of immigrants and non-indigenous persons.  The kind of people our great grandparents died to protect Britain from.

So why do they exist?  Because the other parties refuse to confront the issues which the BNP openly face up to.  Their approach may be deeply racist, but if Lib Dems, Tories and Labour had the balls to bring us a more hard-line immigration policy, there would be no argument for the BNP to have, and they would shrivel and die.  It is the refusal to look at immigration's problems (alongside its positives) which has lead us down this dark alley in the first place.  The fact is, Britain has an "open door" policy, as far as immigration is concerned, and the BNP are the only available mouthpiece for people who don't like it this way.

What about our esteemed mainstream politicians?  No surprise really that voter turnout was so low.  The public have all but given up on them now.

Wherever there is garbage, there are rats who emerge from the sewers to feed.  The garbage, in this case, are corrupt politicians fixated on personal gain.

The sewer is Politics itself.  The British National Party are merely the rats, lurking in the shadows, waiting.  And we, the voters, are too damn lazy to exterminate them at the ballot box.  Shame on us.

Dave - You may well be right but I feel I must now make a stand along with a few million others. Only history will prove it. However history has already proved that paedophilia & the corruption existed & by nature must still exists in our major parties. By the way some are still fiddling their expenses.
10/06/14 boblet
0

Australian dollars or American? Working and taxed. I am British myself we have the good old £
10/06/14 boblet
0

And so the tripe post continues. What a load of tripe I have not voted for years in fact since I realised that if I did not want to vote for any party that was steeped in, corruption, Paedophilia & totally out of touch with the wants & needs of the indigenous population. There was no such a party. Now maybe UKIP is worthy of my precious vote.
10/06/14 boblet
0

In the UK although there is no fine for not voting your credit score can be affected if you don't vote.
10/06/14 Dead and Buried
-1

It shouldn't be an option to vote. In Australia if they don't vote they get fined. Simple and effective. We should all be voting since we live here and want to make this a better place to live.
10/06/14 serious
0

We've all seen how UKIP have forced all three main parties to re-examine their immigration policies after the Eastliegh by-election. My thought is, what's the harm in throwing a huge curve ball by voting for UKIP at the next elections. The Tories are only for the ruling class, the Labour party got us into this mess by spending every penny we had, the Lib-dems don't know the difference between their elbows and their ass, so what have we all to lose. It may well shake us out of this political status- quo. The British people have been gagging for someone with guts to tell the truth and maybe, just maybe Nigel Farage is that person.
23/03/13 Jethro
3

That is my point Chris they are all a country mile from being perfect. I welcome & accept differences of opinion. But what has happened to this country is criminal. I will bide my time & predict that the number of Brit abstainers will grow. The immigrant vote will grow. Eventually the worm will be forced to turn. I will wait in Bradistan for that day, with scant respect for Jock George or his Asian gang, in this passive modern England. I will not vote for rubbish just because that is all that is available albeit in varying degrees.
05/05/12 Boblet
-13

Right Boblet, then I reserve the right to call you if or when you complain about government policy and the way the country is run. The problem is, you'll never get a perfect government and no one party will ever be 100% your number one choice, and yes, you can trust any of them about as far as you can throw them. But you SHOULD pick the one that comes the closest to your ideal government. IMHO!

I voted Keira Knightley how that scabby faced ugly parasite Kate Middleton came above her is beyond me, Kelly Brook was number 2 though but i must admit she does have great tits.
04/05/12 Sam Tupperware
-4

Government has made things worse! A statement used by opposing politicians from there individual parties. Now generalize this statement so not simply blaming Conservative, Labour, Liberal democrat but the system they are born of. This website raises all the issues needed as evidence of there perfidious behavior. Have recently set up an E-Petition which i have been made aware may not work but figure it&#39;d be worth a shot :) It basically asks for a vote of no confidence in the parliamentary system as it exists today in favor of Direct Democracy. Now i also realise that Direct democracy may not have all the answers but what does. I just know that they certainly have no honest realistic answers either. Hope you would all be interested in Voting no confidence. Happy hunting of the truth.
04/05/12 Mike Blackham
-10

Chris, Personally I think it is everybody's duty to abstain from voting, rather than vote for a questionable person or party. Labour invited the opportunists & wasters of the world to stay in Britain. I will not vote for Labour again until they change their policies. We are a nation free to do as our conscience dictates. Immigrants are now influencing our political parties to an ever-higher degree. We have always had our idiosyncratic parties the M.R.L.P. for instance & I love them. But Galloways Respect come on?
"In many countries around the world they don't have any say" to quote Chris. Then why don't they stay & fight in those countries instead of running here? where the battle was fought & won by our forefathers. I for one will not be voting again until a party or person worthy of MY vote hoves into view. I refuse to throw my precious vote away.
04/05/12 Boblet
-11

Very sad Tinkerman. Personally I think it is everyone's duty to vote when they have the opportunity and if you don't, you shouldn't have any right to complain when things aren't to your liking. People have fought and died for the right to vote. In many countries around the world they don't have any say. You should be ashamed.
04/05/12 Chris
4