I have been in love with my ex for seven years now, like a fool perhaps.  I met him when I was 16 years old and we were best friends for about a year.  We ended up together as a couple and I was so happy.  We got engaged and found out we were having a baby about three years later.  Things were great for a while then it all changed.

I believe he lost interest or couldn't put his pride aside and say he was wrong.  Anyway our daughter is now 3 years old and since she was born I have only received about $800 (that's being generous).  No quality time, nothing but heartache after heartache and constant let-downs.  We were a couple for the first year of our daughter's life at which point he started drinking heavy again, doing drugs and going off with other women. So I did what anyone with any sense would do.  I tried to move on.  He had his life and I was trying to figure out who I was.

At that point my ex was everything that I knew.  I was lost and confused, so I tried to find myself any way I could and in the process went through two less than perfect relationships.  About a month ago I moved back into my mother's house with our daughter and wouldn't you know it, I ran into him again (perfect timing for him).  He is married now, but he told me that he really wanted his old family back.

We had about two weeks of wonderful times and real family time with our daughter; it was absolutely fantastic!  However out of the blue, he was whisked off to jail for failing to pay $50,000 in back child support for his two boys from his previous marriage.  He told me that he doesn't know what he wants to do when he gets out of jail, who he wants to be with, where he wants to live, etc.  I decided to visit him in jail today and it was a good meeting (I dressed cute of course, why wouldn't I?).  We talked a lot about future plans and trying to make life better.  However, his mother who was drunk at the time called me this evening. 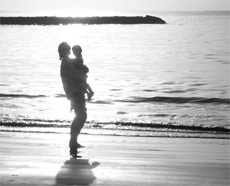 She accused me of playing mind games with her son by "using" our daughter to bribe him to be with me.  She completely tore me down, threw every stone she could think of to make me cry harder and hurt deeper and basically warned me to stay away from her son.  She claimed that I never loved her son and blamed me for his life being so disoriented and him being so confused.  She wants our daughter in his life, but at the same time wants me out of it.

I just cannot and will not allow him or his mother to have my child without me in her presence.  I make sure she is safe and that nothing happens to her.  I am very protective of my daughter because you cannot change what has already happened, you can only try to prevent it.  They just "trust" everyone and I'm pretty sure I can't deal with that where my daughter is concerned.

What should I do?  Am I being a "bad mother" and "using" my child to get to him (even though I feel that he completes me)?  Any advice would be useful and thanks for those who took the time to read about my situation.

"I know I was harsh by going out with one of his mates days later, but I've realised i've made the biggest mistake ever, anyone know how I can sort it?"

A good start would be by growing up and learning and adhering to some moral standards. At least you've accepted it is your mistake and you haven't tried to blame someone else.
09/09/09 MikeP
-5

I was going out with a guy for 9 months, I dumped him because I thought he was too good for me and I didn't deserve him, I also thought my feelings were gone for him. 3 days later I thought I liked his mate, (they weren't that close) and went out with him for a week. The guy I was going out with before text me to ask if I wanted to still be friends and said I hope you're happy with that ****, I obviously wasn't happy with him calling my boyfriend at the time this.

A week later, I realise I like the guy I used to go out with, actually more than like LOVE. and I can't get him off my mind. I got back to school to find out he had had a car crash and wasn't interested in me anymore. He had told me he loved me and we were closer than anything. He was like my best friend. He's now being saying behind my back that I'm a b***h and that I treated him like s**t. And that he treated me like a princess. He now doesn't want to be friends any more and can't even look me in the eyes. I don't understand why? He was in love with me so why can't we be friends? I know I was harsh by going out with one of his mates days later, but I've realised i've made the biggest mistake ever, anyone know how I can sort it?
09/09/09 A
3

um yeah.........you need to forget about trying to rekindle the old relationship and find someone better who will take full responsiblity of what is his if there is anyway possible for him to have some sort of realtionship with his child yeah let that be. but for you dont hurt yourself again again by trying to put a piece of a puzzle in a wrong spot
17/08/09 kikimama1986
-9

The only thing worse than an idiot, is a non-idiot who treats idiots with respect they don't deserve.
15/04/09 A non-idiot
-17

Love is the strongest form of insanity there is. It should be avoided at all costs. It is an invitation to someone to take you for granted, use and abuse you, bore you to death, sadden and worry you, depress you and cause you to react and sometimes behave quite irrationally. I recommend a hedonistic lifestyle of one-night stands, lack of commitment, a degree of selfishness, the pursuit of pleasure for the sake of the pleasure itself. Homosexual men have got it good because men tend to find such a lifestyle much more agreeable, than straight men trapped in their lives of boredom, frustration, nappies, financial strain and all the madness of so-called love.
16/11/07 Nick
-1

Grow up-professional victim.
You are teaching your child to fail.
You probably have a history of dating loosers.
You are predictable and tedious.
14/11/07 geoff d
-3

It's your life, how you live it and how you make your turns in life is partly controlled by yourself. I write partly for your life is already made out for you, you may not be aware of this fact.

Good too see the UK releationship gripe site solved another case, but surely all she had to do was read it back to herself so come up with the same conclusion.
09/11/07 Cher
-4

I want to thank everyone for your advice. I knew in my heart I didn't need him around. This gripe thing really helps because none of you all know me or him and can see things in a logical way. I am happy that you all can give your advice and believe me I will take it and run with it. I have recently told him to please leave my daughter and I alone... I can do bad by myself. Thanks guys.
06/11/07 A mother
-1

Do you know what, I believe you need protecting from your own stupidity. I don't want you to feel like an isolated case for there are millions out there just like you.

People will suggest things here, most will seem like they may as well be asking to you to fly to the moon.
Your ex-partner is in jail, he has a history of drugs, being a drunk and a womaniser and you can't see anything negative about this? Or if you can, you seem to suggest that this behaviour is excusable.
Then there's his mother....etc, even though the father probably told her, you were just out for money.
Hey! What about your behaviour, you say you are very protective of your daughter. Given what you've said so far all I can say is, I don't think so! You make sure you've put yourself first all the time. Yes, because of your need for this loser to "complete you" you're prepared to drag your daughter down to this level? Does she deserve this?
You need to get out of this trailer trash nightmare. Get an education (to get work) or get therapy (so you DON'T keep making the same mistakes!) or do an Erin Brockovich (something positive for a change?) For the record, another person does not complete you. You complete you. In other words learn to stand on your own two feet first and teach your daughter how this is done, this is your reponsibility now, no one elses.
04/11/07 Chris
-9

I agree with what MrsA said. Do what is best for your daughter and not get involved again. Actually, you said the mothe rung you up drunk and that he had started drinking again? Would you really want to have your daughter in that kind of environment? I don't think so. Have patience, someone good will come along.
03/11/07 Dee
-4

I think you should go and knit yourself a cardy, you'll feel much better afterwards. Also, try a Wellington boot, it's much better than a man.
02/11/07 Marge in Stoke
-9

I don't belive what I am reading at all is real. Go on tell me you are a script writer for a soap opera series: Eastenders perhaps?
02/11/07 Skeptiko
-37

Daughter rejected by ex-husband after divorce

Absent father makes no effort for his children

Jealous ex-wives use kids as pawns