I have realised recently that many people in my position cannot afford to be sick, it is that plain and simple!  I work in a low wage job with no perks.  I work 3 days a week and I work shifts.  If I am ill and I take time off, I just don't get paid.

I get statutory sick pay after the 3 waiting days - that's the equivalent of a weeks wage for me.  Then the sick pay is roughly two thirds of what I earn.  Recently I had to take 3 weeks holiday entitlement and arrange my shifts either side of those to allow for a minor operation and then recovery.  To have taken the 3 weeks sick would have cost me 2 and a half weeks money, which I cannot afford.  I would have got behind with the bills and not many companies care that you have had an operation.  In a low paid job you really don't have much money to live on to begin with, and when I say 'live on' I'm talking about the necessities such as rent, council tax, gas, electric and food.  I'm not talking about shopping form catalogues, store cards and other luxuries.  I just can't afford those anyway! 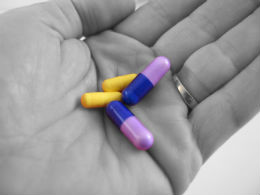 If you've had time off sick it takes weeks for the council etc.  to sort any benefits you may get on top of the statutory sick pay and all the while you have others hounding you for money while you are ill or recovering.  The council are one of the worst by the way.  They tell you Pay it now and you'll get a rebate later' - which is fine if you have the money to begin with!

Then there are the "free" prescriptions.  What a joke they are.  I am entitled to free prescriptions because I am on such a low wage, and my daughter receives them because she is under 16.  Recently I needed hayfever tablets as I suffer badly and have trouble breathing at night when the pollen count is high.  I was given the name of the medication I needed on a slip of paper and when I asked for a prescription was told to just buy it over the counter.  Well I can't afford 6.99 for 5 days supply I'm afraid!  I guess I'll just have to suffer.

I also recently went for some lotion for my daughters' headlice and was told the same thing, which is JUST GREAT since some other parents don't bother to sort it out and my daughter gets her hair done once a week costing anywhere between 5 and 12 a time.  I don't ask for prescriptions all the time, only when money is tight and myself or my daughter need something.  What is the point of me being given free prescriptions at all when I can't get what I need when I need it?

So there you have it.  Can anyone who is on a low wage actually afford to be sick and have time off work?  I'd love to know how others manage in this situation.  It would seem that only the well paid and better off are allowed the luxury of sick days!

Mr Smith will soon be leaving the building with his puppet mate David , rotten twits the pair of them failing the public !
27/08/14 Bulldog
0

This is just 1 example of Ian Duncan smith reforms ,they don't work and people know it !
Eastern Europeans come here and live the life of Riley is it not true ?
Fail to pay their taxes go out stealing regularly , fraud ?
I say out with that prick in no 10 make way for the Bulldog
14/06/14 Bulldog
0

Dead and buried should be. Not long enough? OK, Bulldog for Prime minister!
12/06/14 marmalade
0

"Dead and Buried" You are either a Troll, I.D.S. or a zealot woman hater of a certain religious persuasion. To write of the life of a young woman & mother in such a cavalier fashion. I will give you the benefit of the doubt & label you Troll.
12/06/14 boblet
0

In the process of benefit reform there will inevitably be casualties, but it's more important to make sure that people who simply don't fancy working get no benefit payment at all.
12/06/14 Dead and Buried
0

Tragedy of Liverpool mum who died penniless after her benefits stopped

A mum-of-one suffering from severe mental illness died without any money after her disability benefits dried up.

"But the truth is that benefit claimants are being deliberately set up to fail in order to achieve sanction quotas without regard for natural justice or their welfare. Staff are being asked to behave in a manner that is against the department's values of integrity and honesty."

The complainant also alleged that senior managers electronically altered a claimant's file to make it appear they had been told to attend the job centre the following day when no such notification had been given. Failure to attend a job centre interview is grounds for sanction.

TIME TO GET RID OF THAT PRAT IAN & HIS MATE DAVID !

7 Quid for hayfever tablets?! Where the hell are you buying them?! They are less than a pound for a weeks supply.

Actually I can see their point. Your daughters headlice are something that should not be paid for by the NHS. She needs to take due care not to get them in the first place. I had hair down to my thighs in primary school and I only ever caught headlice once. It isn't exactly unavoidable or a necessity.
28/04/14 Lexi
-1

What do you want to do when you've finished?

I think I have just about reached that blessed state too!
02/02/13 grumpyoldwoman
-8

Is it just me or has Number 2's incoherent ramblings lost their power to irritate? They have just become a sort of wallpaper in the background of the WG that I don't really see any more.
01/02/13 Fed up pedestrian
0

I'm not so sure, boblet. I think he's proved himself to be eminently qualified.