I was recently made redundant again and have been signing on at my local Job centre.  Recently I was taken to one side by a woman claiming to be the manager, she asked me to start signing on at the main Job Centre in Leeds city centre.  I refused and informed her I knew my right to sign at my nearest office.  This really ticked of certain members of staff there and every time I signed on they continued to harass me about it.

Then my housing and council tax benefits where suddenly stopped without any notice.  I called in at the local Job Centre to find out why and was told by one of the staff that I had failed to respond to a letter sent to me in December 2009, which made no sense at all as I only started signing on in January 2010!  When I told him this he got all flustered and accused me of being threatening (I hadn't even raised my voice once!).  Then last week I was called in to sign on and have an interview.  The so called interview was at 09:40 and I was called to a desk and shown some minimum wage, dead end jobs.  By the way I'm a Printer with an ex-wife and kids to support so a minimum wage is just not enough.  I said none of the positions were suitable as the money was just too low.  She said OK and I signed on at that point.  I was then told that I could go and when I asked 'What about this interview?', she informed me that that WAS the interview.

On Friday my benefits were stopped as I was accused of saying 'I was not willing to work certain hours'.  The working hours never even came up at the interview I did not know I was having!  When I pointed this out on Friday she changed her story and accused me of saying 'I was not willing to travel to Huddersfield (for minimum wage)' .  My point was the salary not the commute. 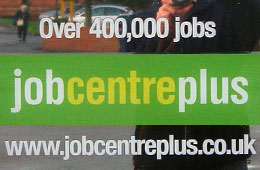 It's supposed to be for the long term unemployed...

So I now have no income, I have made a complaint and have an appointment with the manager on Monday.  The manager is male?  Who was the woman who introduced herself as the manager?  Why was she so desperate to move me to Leeds?  Well!!???

She is one of the 'new deal' gang, you know...  the governments beautiful training plan.  So I looked into this and my local Job Centre does not run the new deal as it's classed as a smaller office and its run from Leeds city centre.  It all begins to make sense now.  It's suppose to be for the long term unemployed and yet I had only been signing on for a month when I was collared?  This 'new deal' thing to me seems to be all about providing cheap labour to large UK companies by forcing people to work for the minimum wage.  Meanwhile these companies are cutting back on hiring there real staff.

I know there are some people who just will not work, and my god do they keep telling us about it!  It gets your back up and you all over react and let the government pass new legislation which in affect hacks away at the very safety net that you may well be falling towards yourself in the near future as this country is about to go into economic meltdown.  And now our government are treating us like their own live stock.  I have paid handsomely into the British tax pot for twenty years and do not expect to me treated like scum because I lost my job.  I am used to earning 30k+ within printing and I'm not willing to work for minimum wage.  I was chatting to another guy in the same boat as me, his benefits were stopped as he would not take a minimum wage office job.  The guy is a Chemical Engineer for goodness sake and has real skills!  When will we the British public wake up to what's going on here?

I saw a picture on a political news site last week and it so summed up the British attitude to life.  It was of four people in a boat, two at either end of the boat.  The two at the front where bailing out the water as fast as they could, due to the hole at their end.  And the two at the other end where laughing and thanking there lucky stars that the hole was not at their end of the boat.

FUP....I'm sure I'm not the only one that thinks it but if it suits you to make that assumption then so be it. This problem was here before the Tory party got into power. Blair and his cronies caused many of the problems we face today but it is always easiest to blame the current administration. I'm not for a single minute suggesting they shouldn't shoulder some blame but I am saying they are not the architects of this problem.
Needless to say, you won't agree.
01/10/14 Samson (Delilah's too busy to post)
0

I forgot to mention the peers name, it's Lord Hill. No wonder the Tories are in crisis with loose cannons like him. Keep up the good work boys.
01/10/14 Vote Ukip
0

Can you believe this folks,

In a hearing in the European Parliament today, a Conservative peer promised MEPs that he would put EU regulation above Britain's national interest at a time when the Government is legally contesting European financial legislation to defend the City.

Yes, my point exactly which is why I said

"How can the benefits system be the problem if working people cannot afford to pay their rent? These are not "scroungers". Low wages and a shortage of social housing are the problem for these people."

You need to address your comment to Samson who considers that the benefit system is the problem.
01/10/14 Fed up Pedestrian
0

"The majority of new Housing Benefit claimants are in work." FUP

That may be so, but isn't the problem low wages?

If we had a higher minimum wage many people would be taken out of the Housing Benefit claiment pool.

"I don't agree that he is "Targeting" the working poor as he thinks that pensioners would lose him the election."

You are the only one who doesn't think that. Why do you think he is targeting the working poor?

Regarding working people not being able to afford to rent, it’s an increasing problem, especially in London and the South East. It wasn’t always that way, even in London; I have never been a high earner but I managed to buy a home. There is a generation now of working people who may never be anything but renters.

Tory policies such as the Right to Buy have decreased the stock of social housing everywhere, Labour open door immigration policies put enormous stress on all forms of rented accommodation and buy-to-let landlords cashing in on this have put the price of a home beyond many people’s budget. The Tories promised to do something about uncontrolled mass immigration but have done nothing but punish the poor.

Under the current Tory administration poverty has among the working low paid has increased. Every day an extra 310 working people are forced to apply for Housing Benefit in order to pay their rent.
30/09/14 FuP
0

I don't agree that he is "Targeting" the working poor as he thinks that pensioners would lose him the election.

The benefits system fails daily. Working people not being able to afford to pay rent is not a modern problem. It's been going on long before the Conservative party came to power. The benefits system is so screwed that it cannot support these people.
30/09/14 Samson (Delilah's too busy to post)
0

"I don't agree with your comment about Osborne's intentions though."

How can the benefits system be the problem if working people cannot afford to pay their rent? These are not "scroungers". Low wages and a shortage of social housing are the problem for these people.
30/09/14 FuP
0

That's the rental market for you though isn't it. Those that own the properties know there is a shortage of property for social housing and they use it to maximise their income.
I don't believe any propaganda from any of the parties. I can make up my own mind about matters by reading factual information.
The benefits system in the UK is the problem but it cannot now be sorted out without at least one sector of society suffering. Whichever one that is will understandably call foul. I don't think we can ever reclaim it back to what it was originally intended for.
I don't agree with your comment about Osborne's intentions though. That seems a bit like propaganda too.
30/09/14 Samson (Delilah's too busy to post)
0

The majority of new Housing Benefit claimants are in work. How can it be right to be working full time but not have enough money to pay for a roof over your head?

George Osbourne is currently targetting the working poor as he thinks targetting pensioners would lose him the next election. If they win again - heaven forbid - pensioners will probably be next
30/09/14 Fed up Pedestrian
0

Maybe so but surely you have to agree that benefits should not rise at a faster rate than salaries? If they do then where is the incentive to go out and work?

Benefits should be capped so we do not hear about people claiming two or three times an average wage in handouts. That practice is not acceptable. Those that are in full time employment have seen a real cut in their salaries as pay rises have been frozen for a few years now. They are also getting poorer. I haven't had a pay rise since 2010.

The benefits pot is not a bottomless pit and it needs to be managed carefully otherwise the UK tax payer will see increase after increase just to support those that choose not to work. These are the people that are abusing the system and they need to be stopped. Those that are genuinely out of work through no fault of their own, and want to work, will also suffer as a result of large uncapped amounts being paid to cheats. It seems harsh to affect these people too but the only way to stop it is a blanket cap and freeze.

You simply cannot be better off being unemployed than working!
30/09/14 Samson (Delilah's too busy to post)
0

'We have everything we want here!' Slovak mother of 11 who gets handouts of £430 a WEEK says she won't get a job and will stay in the UK 'forever'

ITS ABOUT TIME WE DUMP IIAN DUNCAN SMITH THE SCAM MONGER !
British people getting sanctions & some Eastern European prat gets a full handout ...
11/07/14 Bulldog
0

People who refused to work for free could get £130million benefits payout after court says retrospective laws breach human rights
High Court rules emergency laws breach the right to a fiar trial
Government passed legislation to shore up back-to-work scheme
Jobless were told to take an unpaid placement or lose benefits
Cait Reilly, 24, took the government to court over job in poundland

GO BACK TO SCOTLAND IAN YOUR A FOOL WHO JUST GOT SERVED !