That?s it I have had enough!  I just can?t watch another so called celebrity show!  Be it ice skating, singing, dancing, wrestling, cooking or whatever.  I mean fair enough if the actually managed to get a Celebrity on the programme but its usually made up of failed pop stars and soap actors trying to kick-start a career off the back of the show.

The shameful disaster that was this years Celebrity Big Brother only goes to highlight how far this reality/celebrity nonsense gone ? too far in my opinion!

Aside from the alleged Racism endured in the house by Shilpa Shetty, we were subjected to the real dregs of the celebrity barrel, Jade Goody and her family, a member of the Jackson 5, Former S club singer Jo, the Face man from the A-team, Leo Sawyer, ?H? from Steps and Clio - who shares her name with Renault car.

Now just a bunch of washed up jobbers ...

Who are these people?  They were all in the celebrity bracket once upon a time, but not now just a bunch of washed up jobbers who signed away their dignity when the agreed to go in the house. 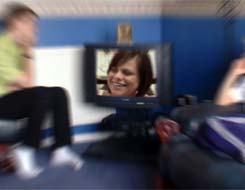 I want real entertainment back.  Remember all those great shows where you used to have real singers, dancers and comedians?  They used to call it a variety show and it was quite often compered by Jimmy Tarbuck or the like.  Now every TV programme has a panel of ?expert? judges, a TV audience phone vote and then the heavily hyped up voting off part of the show!  They are all the same!!!  AAARRGGHHH!

In short I?m fed up of watching this tripe as it seems to have invaded every channel and every TV programme.  I don?t suppose it will stop, so here?s my suggestion it?s called Celebrity Island.  We take every celebrity who has appeared on these types of shows and dump them on an island in the middle of nowhere ? and leave them there!

I can't stand celebrities on game shows, eg, celebrity chase, tipping point, catchphrase, supermarket sweep, etc. why do they have to be so loud and obnoxious like they're trying to portray this huge personality because they're a celebrity. Why not just be normal.
08/01 Roy
1

So fed up of reality shows. Dating shows singing shows what ever happened to a great comedy
04/01 Bindy
1

I've had a firm belief, for a few years now, that there are 3 distinct levels of intelligence when it comes to stupidity.
1. Idiot
2. Celebrity
3. Moron

You've got to admit it sounds believable an sounds good. When someone cuts me up in heavy traffic I simply shout "CELEBRITY". They think it's a compliment too 😂
08/12/18 Spyke
2

Why are you people bothered by tripe TV celebrity shows at all? Don't you realize that TV was invented and always meant to brainwash the public? Just ask yourself, what kind of people watch and enjoy Celebrity Big Brother and other similar crap? What kind of people enjoy today's commercial pop music? The answer is: only brain-washed chavs! TV and all its crap shows are only meant to distract your attention from your the real world and what is really going on. That's all about it. So why bother at all? Just throw the TV set away and live your real life. I don't give a damn about TV, I'm just happy to know that I don't need it AT ALL.
31/08/14 Adam
1

What's this new show Tumble all about then?
Just another reason to produce cheap shite tv instead of creating new interesting programs.
Personally I'd rather watch a repeat of Taggart.
12/08/14 Anon
0

Nearly 2 years on, and what have ITV learned? Absolutely jack - still churning out these drossy shows with the same old tired repetitive formula that any old crap will do, as long as you wheel out some no-mark celeb with it.

Celebrities, celebrities.....basically 98% of all ITV output. And it's only 98% as they HAVE to broadcast some news (although some of that is about, yesssss, you guessed it..)

But as it's such trash, what does it say about the mental state of so many that watch this dross?

I would destroy all celebrity tv shows if I could [except comedian tv shows,they're the best] I once tried to watch I'm A Celebrity.It took all of my willpower to not cave in and become brainwashed like the majority of the population!
27/11/10 DSG
13

If I was a god with remarkable powers, I would, without doubt, kill all soap shows. They are made by morons, starred by ignorant and stupid celebrities, but most of all they are watched by millions of people who have nothing better to do.
03/07/10 Jemery Wrightstuff.
-5

I make a point of not watching these type of programmes, because I know that watching pant dry is more fun.
25/03/10 anne
-2

we should all go back to the 70,s were life was so simple decent music and telly we still had a car industry and every body was paid in cash. WE KNEW WHO AND WHERE WE WERE
14/02/10 Letsgettogetherandstopitnow196
-6

I'm a viewer get me out of here.

I'M A VIEWER GET ME OUT OF

Sick and very tired of the so called celebrity Judges that know nothing about music on the CHEESE FACTOR, Judging mostly talentless dorks,why can't there be a show for real singer songwriters and musicians with real professional judges that don't keep filling the chart with tallentless cheesy crap,stopping real tallent getting through just for money, why dos'nt simon cowell and the other 3 untallented morons go and find a chav pub if they want to listen to karioke crap there are plenty of them now.So called Celebritys have taken over all the shows that the public used to be able to take part in and there being paid to better there so called celebrity status, we pay a licence fee to watch this crap,I know there are many people who feel the same way I do. how much longer have we got to put up with all these celebrity shows, they seem to think they are royalty these days and most of them have know talent what so ever,please please someone help get rid of this rubbish. I agree with you CHOIZO N'CHIPS I also think it is a government tool to control us.Gordon brown was saying how much he likes the x factor the other day,I think there is a song called Gordon is a moron it must have been written for him.
18/11/09 I'M A VIEWER GET ME OUT OF
2