First of all, let me say that Im not a bah humbug kind of guy and would like to think that I am just as charitable (if not more so) than the next guy.  I always buy into all the Comic Relief and Children in need stuff as its just been the normal thing to do ever since I was a child.  I would guess that the same is true for a lot of people out there.

But when I look around and even do some research on the Internet, I still see lots of the kind of things we have been paying to put a stop to for about the last 20 years now.  And not only that, I have never seen one thing to suggest that the money is really being spent in the way we are told.

So where are all these kids that we have allegedly helped?  In Africa?  Although it is conveniently very far away I don't think for one minute that tiny bore hole in the ground costs 10 million a year to maintain!  I see all this money being collected but have no idea where it is actually being spent, because it certainly isnt anywhere near me.  If I could just see a bit more evidence of the good being done then perhaps I would not be so suspicious. 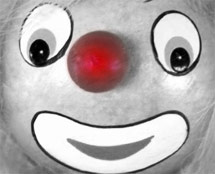 Comic Relief... So where is the other 30p going to?

Now theres another thing that makes me feel a bit uneasy about this situation.  The television and radio companies (BBC radio is the worst) charge you £1 if you send a text to them, with 70p of this money going to Comic Relief.  Err excuse me, so where is the other 30p going to?

I'm pretty good at arithmetic (taps away on the calculator) and I reckon that 30% of all the money from these texts must add up quite a pretty penny.  Why should we be asked to give generously when there are companies out there using these events to make a hefty profit? Surely they can do it at a reduced rate for Comic Relief?  Why can't a larger portion or even better all of the money go to the people who REALLY need it?  Oh no, of course not because its not the big companies that stick their hands in their pockets; thats a job for us - the "paying" public.

I really do think that by simply doing the easy thing and giving to Comic Relief just to ease your conscience is actually taking money away from the real charities that could use our help.  Does anyone else agree?

Cannot see why they need all that money when the Barclay Bank adverts show only people with a dark complexion banking there.
28/10 FedUpOfItAll
2

I always feel guilty about NOT giving to Comic Relief even though I donate by direct debit to several charities each month and to DEC appeals from time to time.
05/09/20 jaybee
3

I worked in a special needs school for years and every year the pupils would raise money for children in need. It's an odd sight to see some pretty messed up kids raising money for children in need when these are the children in need. Over the years I don't recall the school having any aid from children in need and they dealt with a fair few external bodies.
In addition I had a friend whose sister got a job for £45k a year for one of the leading oversea aid charities. The job entailed flying out to Africa and meeting up with some security guards who then drove her to some remote village a couple of hundred mailes away to witness a local woman and child having possesion of some grain in order to show it was getting to the right place. She would do this four or five times a year.
There seems to be a lot of overhead for a little bit of grain.
This is just a short comment so I won't go into all the people who feed off these donations but celebrities are actually paid to go to Africa to film these clips as I know someone who worked at the BBC who infoemed and it runs into thousands of pounds.
Lenny Henry is a C**T.
28/02/19 BurnTheWorld
1

Totally agree with everything you say here, I have been watching the latest BBC news with live interviews to alleged celebrities who have travelled to Africa to see the current situation on the ground, so to speak. I would really like to know how these trips are funded, who pays for alleged celebrities to wander off around Africa in convoys of cars having a woopidoo of a time.?
08/02/17 Jimbob
2

I totally agree with all your comments above, I often give to charity and have done for years but I do see things that do make me ask questions. I have just been watching the BBC funnily enough, and they are featuring top name celebrities who have travelled to Kenya to see how things are, where the money goes, where the money is needed etc. What I would like to know is who pays for these celebrities to travel and stay on the trips abroad to see where our money is spent? This is never made clear in any of the presentation.
06/02/17 Jimbob
2

Its the tip of the iceberg. All charities are the same. For every Â£ given you will find that the charity pays for:- wages (Taxed), goods (Taxed), Storage(taxed), shipping (Taxed) bribes (not taxed but then tax is a sort of bribe), local manpower and greasing palms (not taxed), paying warring factions (both food and money) and then finally 1p arrives with those who need it.

What is really concerning is charities admit to giving bribes to local military forces both in terms of food, money and equipment, to allow them to get to the needy. Therefore you are funding wars in impoverished countries. Donations are big business and provide for illegal activities. Very little gets to those who need it.

A large charity admitted that it shipped 10 landrovers to Africa to help with aid and 9 were handed over to the local fighters so they could use them as military vehicles.

The answer stop giving to all charities. This will collapse the organisations and will eventually lead to wars ending because they won't be able to fund them locally.

Yes, I agree 100% with your comments. I am the chairman of trustees of a charity which set up and runs a school in Zambia for disadvantaged children (Italafoundation.com) We saw that what we did fulfilled the requirements for international grant aid from Comic Relief so we went ahead and put in an application. It was refused, so I phoned them. No-one was able to give me any reason for not making us a grant and they got quite shirty when I asked what, exactly, I would have to do to get funding from them. I suspect that if you are a mate of a celebrity and have a prestigious, high profile project then you might stand a chance. I mix with many other similar groups who are doing charitable work in Africa and none of them have ever got money from Comic Relief. What is annoying is that £93 million of charitable giving has now been taken out of circulation.
10/05/13 Tony
-11

Yes but also if all of the presenters/bands involved gave lets say about £500,000 out of their HUGE salary instead of just going on about what a great cause it is - you are STONKING rich why don't you donate lots????
14/04/13 Teenager
-13

I have been living in Africa for the last 15 years and have not seen any significant signs of any help given. The polititions and drug companies are probably the only ones who really benifit from this aid. Strangely enough you never hear about red nose day or the money that's supposed to be helping the African communities, not in the papers or tv. Surley something as big as red nose day would get some mention, I only know of it because I am British. Why is it that if comic relief has poured so much (over 200m) into Africa that things are still the same or even worse in some areas, it doesn't take much to set up a bore hole or to educacate the locals in taking care of the water and themselves. After all these years of "charity" there would be some positive change and that Britain would at least get one mention for its contribution. So where has all the money gone? Is comic relief just another channel for money laundering at the cost of people who genuinly care as with some other charities. I think we should look deeper into this issue and demand more transparancy before we coff up our hard earnt money. There is some improvement in western education although very little and that is supplied by the local and national governments although this is causing more problems as more people are leaving thier villages to seek work in larger towns and cities only to find there is no employment. Ultimatly this leads to more crime and violence and hard drug selling. If we really want to help we need to come up with a new solution, what do you think?
01/04/13 fruitman
-7

Once again its comic relief but where has all the money gone?! the bbc make this program begging us for money and we want to help can they show us where it goes. Why don't they make a programme showing us where the money has gone.
24/03/13 Lu
-10

Disaster: why does food aid take so long to distribute?