I admit I do find EastEnders quite entertaining as it makes me feel that my life isn't so bad after all.  My 9 year old daughter doesn't go to bed until 8pm so I can not watch the programme at the time it is aired as I feel it is extremely unsuitable for her.  It portrays the wrong image to impressionable children.  I don?t want my daughter to grow up thinking that it is acceptable to have affairs, to lie to your friends and family, to steal, the list goes on.

I seem to recall last year the The BBC being fined ?150,000 by Ofcom after broadcasting the lewd messages that Jonathan Ross and Rusel Brand left on Andrew Sachs's answerphone.  Well I think some of the story lines on EastEnders have been far worse than this and if they were actually scenes in a movie it would carry a rating of 15 at least!

According to the BBC's Editorial Guidelines on Television Scheduling and the Watershed, Section 5.4.6 states that "Television scheduling decisions need to balance the protection of young people and particularly children..." Section 5.4.7 states that "Programmes broadcast between 5.30am and 9pm must be suitable for a general audience including children." 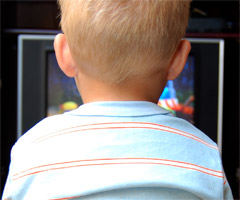 I'm sorry, but I really don't think EastEnders adheres to any of these guidelines.  What is the point of having guidelines if they aren't going to be followed?

...a history of causing upset and complaints

EastEnders seems to have a history of causing upset and complaints amongst its viewers whether it be about gay storylines, violent scenes shown on Christmas Day, drunken pub brawls and various other plots that people have found inappropriate.  You'd think something would have been done about it by now!  Perhaps they need to be hit with a few more hefty fines to realise that they just can not carry on getting away with it.

It shouldn't be broadcast until 9pm with only two episodes a week. Also around Christmas and the New Year period it should be taken off air to give us a break from it but instead there is a huge episode with the most dramatic storylines on Christmas Day in the evening just when everybody is feeling bloated and tired.
20/03/17 Lemsip
1

I don't thick it's inappropriate, You see these things on the street all the time , would you stop a child walking down the street.
02/09/16 Lots
1

Well, you guys are all bloody shining knights aren't you? Unless you all live in Kensington & Chelsea you'd be better off knowing that life is not perfect and that one needs to know how to deal with all sorts of people.
23/06/14 Dave
2

Personally I don't think Eastenders is suitable to be aired on television.

Eastenders is a perfect example of why the TV licence should be abolished.
23/06/14 Samson (Delilah's too busy to post)
1

I can assure you, We had the same type of problems with Brookside, and people like The Grants won't change! If you say anything, you'll seem like a party-pooper. If you don't, you'll get completely wrapped up in the weak story-lines. I suggest just try to let things wash completely over you, and then just jot down or say to someone every now and again, all the things that are annoying you. Having a good moan about the'Dirty dens in life really does no good! He's not real!
22/06/14 collar
-4

I personally think that Eastenders is fine for children because you say its teaching them that it is ok to have affairs and everything else but it isn't because the person who committed the crime always has a consequence so actually it is teaching the opposite and some comments are saying that people speak differently because of it but is that really a problem? they are not swearing and they are enjoying something is that really such a bad thing? some people find it a comfort to distract them from there own lives. you don't know how difficult some situations that people are going through are maybe they enjoy Eastenders as it is a distraction from their own lives.
22/06/14 anonymous
3

I'm catalan and I live in Barcelona with my British wife. I never watch Eastenders. My wife always watches it. I only hear it from my room and always I hear fights, arguments, screams,..... My wife blames me quite often. She gets angry easily. Is it because of Eastenders?
04/11/13 Josep
-1

I agree as it is shows like these that have changed the soicety of children.
18/04/13 ANTIFACEBOOK
-12

Eastender is unsuitable for kids because it is unsuitable for anyone. All it does is make its viewers miserable, while keeping them hooked by being very emotional and ending scenes on cliff hangers. After Eastenders had finished in the pub, I had to leave because everyone had become so miserable that I couldn't bare to be around them. It's OK bad things happening in TV because bad things are a part of life, and they make you appreciate the good more when things go well, but all Eastenders do is focus on the bad things in the most depressing way they can. If kids watch it regularly, they won't start swearing, they'll just become miserable and begin to think negatively, which is much worse IMHO.
10/04/13 Dan
5