I'm a big fan of Neighbours and watch it every day, in fact I have watched it for about the last 15 to 20 years.  I've been watching it so long I can't actually recall when I started watching it regularly because I even saw some of the early episodes back in 1987.  I prefer this soap to Eastenders because it's less depressing and it allows me to end the evening in a happy mood.

One thing that annoys me about Neighbours though (apart from the cheesy sound effects) is the blatant product advertising, particularly with Apple products.  Everywhere you look someone is pulling out an Apple notebook or poking away at an iPhone.  When someone goes out for a run (this is something they do a lot in Australia apparently) they have an iPod strapped to themselves.

Apple devices are so prominent in the show...

Whilst I understand that Apple products may be cheaper in Australia than they are in the UK, I find this level of product placement to be a bit overwhelming and biased.  These Apple devices are so prominent in the show one could easily believe that Apple have sponsored Neighbours.  Surely that's not the case?  What happened to good old PCs and Blackberry or Android smart phones?  If we're going to have branded stuff, let's have a little bit of everything please or let's have none at all. 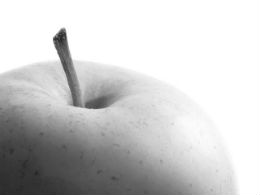 Facebook too seems to get mentioned all the time.  This is very much a bugbear of mine because you can't walk down the street or turn a page on a newspaper without seeing Facebook mentioned and seeing the big blue "F".  Interestingly enough though, they've got a search engine called "Poodle" which looks remarkably like another well known search engine.  I have no idea what that's all about, but can we expect to see someone else searching on Weyhey or Bung any time soon?

You will notice that also now on British soaps. Just become conscious and observe. For fun, you could jot down every time any form of advertising is mentioned. Before I switched the nation-dumbing shows off, it was becoming more and more blatant, airline tickets mentioned about being sent to her iphone, Selfridges gift vouchers, facebook, kfc, you name it, it is being advertised. You will be amazed!

But, to be honest, isn't one of the prime reasons for TV shows is to advertise? Maybe once upon a time the advertisers would clamber for time in the breaks of these shows, now it seems the shows are the vehicles for advertising, oh and the mindless dumbing down distractionary brainwashing and predictive programming.
21/02/14 Babs
-1

I know you posted this ages ago but oh well. You're forgetting that this is an AUSTRALIAN show and most people in Australia own Apple products. I'm only 15 and all the people in my year level have either Apple or Samsung phones or tablets. If they had a heap of variations of phones on the show it'd just look weird since most people these days have Apple products. And with the food thing, most shows don't film a scene in one take. It'd take multiple shots and you don't want the actors/actresses feeling sick would you??

I wholeheartedly agree with this blog. I'm watching Neighbours right now, in the UK, and the sheer cartful of Apples on show prompted me to do a quick Google (or should I say 'Poodle') for "how much money does neighbours get from apple product placement" - which led me to this very article.

I'd assume the show gets a hefty contribution from Apple.

Seriously who gives a damn what products they use! So what if they have alot of money! if you dont want to see Apple products or Facebook then dont F(_)ckn watch the show! it's not a big deal! maybe you guys are just jealous on how much money they have! it's a successful Australian TV show, what do you want to see them have? an old sh1t early 2000 Nokia phone!? bloody jealous bogan cheapo's! of course Apple and Facebook is popular these days.... what are you gonna do? go ahead and rate -infinity i dont give a sh1t! (dont make a big deal about a little sh1t, the tv show is great so enjoy it!)
17/01/12 Neigbours fan AU
-10

I care about product placement...Declan used to have the same Motorola flip phone as I had at the time and it was highly exciting for me, until his face changed and he became weird looking. Then I moved onto Blackberry and have regretted it ever since :(

Also re: Poodle search, the new perfered search engine of choice on Ramsay Street is The Search Engine (with a little steam locomotive above the name). It makes me chuckle every time!
16/10/11 Fiona
1

Do you reallly think that people pay attention to company placement on soaps?
if so,then you clearly don't know the culture of today!
01/07/11 DSG
-15

Apple stuff is everywhere these days not just on Neighbours. People have far too much money and not enough sense apparently.
07/04/11 M.T.
-19

If you've been watching Neighbours for 20 years, you have far bigger issues than product placement to worry about - although I must admit that Jordy Lucas is fairly easy on the eye, lol !
01/04/11 HusbandofNeighboursAddict
-12

Dear SF, that happened a lot on Dallas too. Meals left untouched, or only a mouthful taken; drinks only sipped once and then left. The truth is that this is less about messages that promote wasteful habits, it's purely practical - actors can't talk and drnk with their mouths full, and interferes with the script dialogue. Furthermore, hot meals on programmes are often stone cold in reality, and drinks artificial to look like wine. So the actors wouldn't want to consume them anyway.
29/03/11 Grumpy xx
-12

It has a lot to do with money methinks. People on Neighbours are portrayed as being middle class living in a nice suburb of some fictitious, but presumably nice place in Australia. People who have money buy Apple products rather than something cheaper :-) I've noticed on the few times I watched Neighbours that they waste a lot of food, they never finish a snack or a drink off. This too indicates that they have too much money.
29/03/11 Soap fan
-1

It's the world we live in today. many people complain that soap operas do not reflect real life but when they do they are criticised for it.
You cannot go anywhere today without seeing or hearing about facebook. Even corporate companies have facebook pages these days. Apple products are also the most popular of their type. Android is improving but isn't up to their standards yet. People everywhere use iphones, ipads and ipods. I wouldn't leave the house these days without mine, I've become so sadly dependent upon it!
If these companies are sponsoring the program then they are entitled to advertise through it. If they withdrew their funding then they would just be replaced with another company and you would get to see their products instead. At least whilst this goes on you can continue to enjoy the show you clearly love, so I wouldn't complain too much. Once the money dries up then it will be dropped from your screen in an instant.
29/03/11 Freddie
-31

Warranty problem with an iPod Touch from Play.com