Well it looks as if the TV Licensing people haven't got the message yet, even though their enforcement officers paid us a visit just over a week ago.  I moved to this house a few months ago by the way and have so far completely ignored all the warnings that they have sent demanding that I buy a TV Licence or possibly face a fine.

I don't see why I should communicate with these parasites every time I move house to tell them I still do not have a television.  Why should I?  It's a clear case of being guilty until you prove you are innocent.  As for the enforcement officer with the TV detector van that turned up last week, well he wanted to come in and take a look around to make sure we didn't have a TV.  Naturally I wasn't going to permit a stranger to come into my home without some more official looking documentation.

That TV Licensing badge looked authentic enough, but this guy could have been anyone and I didn't see a van up the street!  He could even have been there just to case the joint for some future robbery or it could have been a distraction burglary, you hear about them all the time.  I sent him away to get a warrant because he wasn't about to enter my house without one.  He mumbled something about making a phone call and that they had detected a television in my house.  I pointed out that the only thing they could have detected was the computer as I don't have a TV. 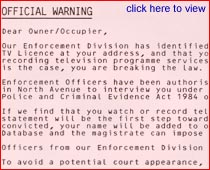 That was that I thought as I closed the door and I still haven't heard anything further regarding an inspection so who knows.  I had thought that our little conversation was enough to set the record straight, tick in the box that this house doesn't have a TV etc.  Apparently not though because I received yet another threatening letter from the TV Licensing people addressed to The Occupier.  Very strange that, because the enforcing officer that turned up on my doorstep took a note of my name.  I would have thought that information should have filtered through they system somehow.

Anyway, this letter from TV Licensing is actually the reason for writing this gripe (click on the image to read it in full).  It's the tone of it that I really don't like.  It comes across as very threatening and intimidating and if any other company were to send out this kind of material on a regular basis, I am pretty sure there would be a national uproar.  How do they get away this?

It begins with the words OFFICIAL WARNING in underlined capitals.  A warning of course means cautionary advice about something imminent (especially imminent danger).  An official warning therefore carries more weight.  It means you've done something wrong (or they think you've done something wrong).  Even the typeface comes across as a bit official and stern and this is deliberate I think.  Then there's the liberal scattering of words and phrases such as "police", "criminal" and "court appearance" in the text.

In my opinion this document isn't designed to help you buy a TV Licence, rather it is designed to SCARE you into buying one and that to me is just not on!  When did it suddenly become okay for companies to send out a threatening communication like this?

As I mentioned earlier, I don't have a TV and I don't want one.  But I also don't believe that I should have to inform these people whenever I move house that I still don't want a television.  I especially resent being harassed (yes, that is exactly what this is) and treated like a criminal because I dare to stray from the norm and not buy a TV licence.

Can you imagine how an elderly person would feel having received a threatening notice like this?  Not particularly nice is it?

How to deal with TV Licensing

@Bryan Lahonda, Different name now I see NIXOFF. How's the psychosis coming along? not responding to the meds? Mucky mouth doesn't help. Try to take a few deep breaths to calm down before answering. I hope you feel better soon. All the best.
02/09 Jethro
-10

@Nixoff Swiftly, I hope you know there is plenty of help out there for your anger. Most of the people I help with these issues respond well, you may take a little longer, I sense deeper problems.
01/09 Jethro
-10

@ Nixoff Swiftly, My My, I can see that COVID isolation has not fared well with you. Have you talked to anybody about the way you feel? You should get a grip of those emotions before they become a mental issue.
26/08 Jethro
-9

Once again the idiot or idiots are on here giving negative scores to sensible correct statements, you are SHITHEADS for doing so!!!
26/08 Nixoff Swiftly
12

They'd need a "projector detector" to catch me, not that I watch any of the garbage on the BBC. I'd rather steal my content from Netflix and Amazon.
11/02/21 Jasper
12

Well, when I was doing Physics A Level in the late 60s, a TV detector van came round to my school. We were shown the equipment in it, told exactly how it worked and given a demonstration of it working.

The way I see it; the TV licencing department of the BBC is guilty of trying (and in most cases succeeding) to blackmail people. Blackmail is described as: The action of demanding payment, or another benefit, from someone in return for not revealing compromising or damaging information about them. The BBC is demanding money with the threat that they will use the court system to take Â£1,000 off you. It shouldn't be up to the BBC to set a figure, it should be up to the courts. The fact they set a figure turns any demand they give into a case of blackmail. I for one have had enough of the BBC trying to blackmail me into paying them money. Just for clarity I do not have a TV, and I do not see why I should tell anyone. Innocent until proven guilty. Oh, and TV detector vans do not exist.
10/02/21 Jason Mackinnon
4

I forgot to pay my TV licence so it's just over month half late. Received one reminder letter put it somewhere safe to pay forgot. Today I received an inforcement letter saying they have sent me several reminders. Um no they sent one reminder. This letter is very threatening and an absolute lie several reminders Implies I now have a stack of them. Nope just the original letter and one reminder. Guess now so many people are no longer paying them they are picking on the ones who do. Nice to know the BBC can get money with menace from someone who genuinely forgot
12/12/20 Twiggy
3

I informed the BBC that i wouldn't be renewing my license November 2020. I received an email to say thanks & half an hour later i received another one telling me i could be fined Â£2000 for not having a license. I joined a group on social media of like minded folks that have also been treated badly by the BBC. Why are they allowed to said out threatening letters, if i did the same i could well end up in court. The BBC are cowards by threatening old people & isn't it time they took down that pedophiles statue.
14/11/20 Oldnick
3

I received a letter just like this on Thursday, 22/2019 I don't watch bbc all I have is Netflix which I watch occasionally, when in the mood for a film. It got me so worried, I started to have an anxiety attack and then it felt like I was having a heart attack, big punch in the middle of my back, pain across my shoulders and up the side of my neck, I was sick twice, felt so ill I went to my bed, thought i was dying, and there I stayed until Saturday evening around 6.45pm, what ever it was knocked me for six! I've never felt so ill! Im 67yrs old and it really did get me worried, they shouldn't be allowed to send out these bullying threatening letters to people. So now I'm just about recovered still pain in shoulders, I did a little research and found this , so because I only watch Netflix I don't need one of their darn lisences ! Their very welcome to come and. check, obviously if they have a warrant etc to enter, I won't just let anyone enter as you say you never know who they are.
Thank you for your post.
26/08/19 Jolly jack
3

My knowledge of TV licensing law is sadly not up to date.

My understanding is that if you have equipment that is capable of receiving live TV then you need a TV license.

Thus, even a PC with a reasonably fast broadband connection needs a TV license.

I have previously had an enforcement officer inspect my property and was very polite and made two cups of coffee!!yesterday I received nos 13 threatening letter , this time I did not open it, but in marker wrote return to sender!! If as and when the next visit happens they will Not be allowed to enter my property without a warrant. Considering the money they are spending harassing people who, have lived in the same property for over 20 years without a tv..... RantRant Rant. As previously mentioned these letters are very threatening , with the assumption that we are Guiltyof?? How much money will these numpties spend before they get the message????
20/03/14 Kevin. Kade
2

What are we paying for?

It was the introduction of colour TV that caused the licence to more that double to today's licence fee, of around £145 per annum

But surely the technology is cheaper today.

As consumers we have not got the gain from this, instead our airwaves are filled with crap: quiz programmes, soaps, unwanted sports, poor news coverage, poor drama, crime series bought from USA. Too many overpaid TV presenters, who main aim is self glorification.

BBC 2 has gone down hill

They have no right to issue threats. Basically 98% of all ITV output has advertisements. And it's only by sending these letters that they annoy people to the point of distraction. They HAVE to send some letters (although some of the letters are too threatening, you've all had at least one..)

But as it's such an expense, what does it say about the bad-heads who knock upon a persons door? The state of their nerves must be fragile to say the least - how many bad-heads are there that do this door knocking?

Is this a new form of culture suppression? Sinister aint the word!
10/03/14 collar
3

This is shocking - absolutely shocking. When the TV licence expired, I started doing without a TV and watched videos instead and I'm no fan of the BBC either! I simply bought a freeview box too and a few decent videos and there's not a lot theycan do about it. Anything I'm un-liking I can usually get on DVD, on YouTube or videos, of which there are many.

For the three years I owned a licence I used to rent a TV from a TV dealer for a full colour set, they didn't even bother to mend the damn thing!
10/03/14 collar
1