After the mildly offensive act in which Russell Brand and Jonathan Ross sent mildly offensive messages on the answer phone of the mildly offended Andrew Sachs (who, in the end, wasn't too upset anyway), all the middle aged sad gits of the world overreacted, got on their moral soapboxes and started complaining about TV being too rude and how decency and respectability had been lost.  After this ended up on the news several times (apparently this was much more important than all the wars and murders that were happening at that time) and the duo got undeservedly punished for doing nothing much wrong, I thought this absurd incident was all over.

Now that Ross is back on the air though, this issue has resurfaced with lots of discussion, articles and programmes about the issue.  Fairly recently there was an episode of "Tonight with Trevor MacDonald" (or not Trevor MacDonald for this specific episode) titled "Is TV Too Rude?" in which a bunch of people were invited to watch certain TV clips, voice their opinion on the clip and then vote on whether it should have been broadcast.  By far the most vocal person there (I don't know his name so let's call him Richard) was strongly against every TV clip that was shown and didn't want them to be broadcast.  One thing he said which stood out was something along the lines of "I don't want to pay my TV license for this filth". 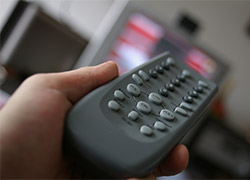 TV isn't there to entertain JUST YOU...

Well, here's the thing Richard.  If you don't want to pay your TV license then don't pay for it if you're that bothered.  What you have to understand is that TV isn't there to entertain JUST YOU, it's there to entertain everyone.  If you're upset by profanity and nudity then there are plenty of high quality programmes before the watershed for your enjoyment.  Alternatively you could just get rid of your television set and leave the rest of us to enjoy our programmes!

Profanity is part of our language and the human body is part of our art and culture and there's nothing you can do about it.  I hate soaps.  They're bland, repetitive and insult my intelligence but, even if I could, I wouldn't get rid of them.  The reason is that, unlike Richard, I understand the TV isn't out there just to entertain me.  I understand that many people enjoy soap operas and that I'm not forced to watch them.

TV is for everyone and if you don't like it then turn it off!

I know plenty of people who don't pay their licence.
Its so much rubbish on TV these days that you're short changing yourself if you pay it.
My personal view, though I don't wish to enrich Rupert Murdoch or Richard virgin Branson any further than they are, is that I would like to have sky so I can get a package of channels I want to see even if it costs me so much a month to do so plus I would have it if I made the laws so that those on any contract of pay-per-month wouldn't have to pay for the TV licence as they receive it all through their satellite box. and pay more than a TV licence anyway.
As for the idiots who write in to Points of View to complain, they should get a life and not worry about such small stuff and second, I honestly think that they read out some of these fools' complaints so to embarrass them so that people they know will be watching and know its them who wrote in.
04/08/13 ahforfoulkessake
6

Craig D; the fool is you if you think buying a freeview box means you don't need a licence.
10/07/13 grumpyoldwoman
5

@Davie, more fool you for buying a licence! Do what the discerning among us do and invest in a 'free-view' device - un-biased reporting, unlike the BBC.
10/07/13 Craig D
4

99% of all TV worldwide is utter shite.
And complaining about it won't change a damn thing.
I sold my tv back in 05 and I haven't missed it one bit.
Unless you like cooking shows,talent contests,and soap opera's you are pretty much fycked for choice in the UK.
I'm not paying for that load of crap on the off chance the BBC puts on a decent documentary or drama once in a blue moon.
18/03/13 Arthur Mullard
7

I agree. I think a lot of people take comedy too seriously when it's a joke-that's why the comedian is on a comedy stage. If if offends them, they can change the channel or turn the TV off.
21/04/12 Holloway
-8

Chris the jumped up bell end

Nice blog Chris you utter stoater, you have completely missed the point regarding BBC complaints. People are forced to pay a fee for the bbc regardless of the issue of them watching/ listening to the corporations shows or not. Therefore they are entitled to a say in what their hard earned money is paying for. What do you think of today's show... "In search of the perfect loaf"... are you happy that many struggling families had to pay for that production?! I think people have a right to complain when they are forced to fund prime time programs. Most of which resemble that rag in the corner of your room that you use after you've plucked up the energy to wipe yourself off. People should have a right to choose. There hasn't been any decent bbc television for years so why bother with one eh? Cos thats the law. If you weren't such a fat and lonely uppity crank, you would be out enjoying yourself like the rest of us life full-filling folk rather than writing blogs that aren't even good enough for the Daily Star's agony aunt comic strip section.

Team 365, 80, Roding Road, Becton, London, E6 6LS. This is where the threatening mail from tv. licencing originates. It is situated on a small industrial estate that has one entrance that is the sole means of entry/exit. I recently came across this infomation
14/04/11 alvin.
5

if tv is for everyone then why do people on nights only get a choice of news,kids cartoons and shopping chanels its rubbish in the mornings you guys get all the better programs in the evenings
02/03/11 skivvy2
5

Chris, you carry on. You made a valid point. Richard will surely die of a stress induced heart attack soon enough.

Ross and Brand made a mistake but their reception was over the top by the high horse brigade.

"Richard" may be a License paying individual but he doesn't need to watch a programme that offends him. That's why people have remote controls with other channel numbers and of course, the power button. Tough titty.

Still, let him have his cake and eat it. He's an individual amoung millions that don't care.

Trouble is I end up turning just about everything off.
08/01/10 Getting more pessimistic
19

Absolutely agree with Happy Bunny (Not)....I wish not paying my TV licence was an option, but I know my life would be made a misery by the endless letters threatening court action....and that was when I was paying for a licence. And even better, my licence fee is paying for the useless system which sends threatening letters to people already paying their licence fee, and pays for the letters, and the postage. In fact perhaps I am getting more value out of my licence fee than most. Given the choice I believe I could live without the BBC, especially if it meant not funding TV Licensing.
26/11/09 Angry
16

Chris, you need to grow up. The License fee is a tax on the British people. This Richard person is forced by the law to pay the license. Even Ross and Brand apologized for the childish behavior.So why defend them, when they have already admitted they have been stupid. TV is not for everyone it is for the license paying British pubic. If you are forced to pay for something then you justifiably have a say in it.
10/11/09 HAPPYBUNNYNOT
15

one thIng I must agree wIth regardIng 21st century televIsIon and the best thIng It has ever done It has made me understand just how Intelegent the vIctorIan erra was In comparIson.
06/06/09 me
-3