I am in a minority group of people in this country in that I am one of those rare individuals who happen to NOT own a television.  I currently rent my house (property prices is another gripe!) and when I moved here I was bombarded by letters from the TV licensing people who more or less demanded that I buy a TV licence.  Naturally I ignored all of these letters for months and months with the vague idea that I could perhaps paper a wall with them one day.

Eventually however, I succumbed to the torment and decided to tell these morons that I didn't own a television and therefore had no intention of buying a TV licence.  I did all of this online of course, there was no way on earth I was going to waste money on a stamp or a phone call to tell these people that I didn't have something!

Anyway, to the point of the gripe.  It's not the constant harassment from the TV Licensing people that annoys me.  It's the attitude of other people that I find quite incredible and a bit irritating.

If you work in an office (as I used to) there is the usual banter about what was on the box the night before and when the conversation swings round to you with "Did you see that last night?"; you get the usual sea of dumbstruck faces when you explain that you don't have a TV and you don't really want one.  People just can't cope with the fact that you don't own a television. 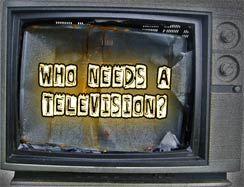 It's as if you have just spent most of your "life on mars", because they just don't understand how you can live without a TV.  For example my girlfriend has a daughter by her ex-husband and he seriously believes that her development is going to be stunted because we don't have a telly, therefore she won't be able to watch "CBeebies" like all the other kids.  I think the more likely scenario is that she will grow up a little bit smarter because she'll have spent more time reading, playing and communicating instead of being dumped in front of the box as so many parents are apt to do.

So there you have it.  It is possible to live in a television free environment and still be normal - really it is!  By the way, it's not that I don't enjoy movies and television programmes. It's just that I prefer to watch what I want, when I want.  Hence we have that wonderful thing called the Internet, a PC, a DVD player and a projector.  Video on demand is in fact here now for those of you who don't want to be passive consumers of commercial junk.  By the way, I really can't stand the adverts and that was another good reason to toss the goggle box in the bin!

Your girl's kid will have to have a TV so that she can talk about Eastenders, Hollyoaks etc and above all, join in and not be the odd one out. That's more important than your sweet 1950s vision of the world.
29/06/13 NimbyProvoker
-7

i know what you are saying grumpyoldwoman and have also watched dexter shows online but i don't think my wife would go for having no live tv to watch but i would be quite happy just watching dvds or doing other things other than sat watching tv vegetating.
15/05/13 sssshhhhh
-3

The GOM and I got hooked on it when it was on a freeview channel, now I just download it. Not quite legal, I know, but I don't think anyone should have to pay to watch commercial television; that's why they have adverts!
14/05/13 grumpyoldwoman
-12

dexter season 8 starts in july when that finishes would be a good time to cancel sky and be rid of tv but don't really see my wife agreeing to it somehow.
14/05/13 sssshhhhhhhh
-7

well another christmas with sweet F.A. to watch on the tv even with having sky just glad we had dvds for presents and others we wanted to watch again remind me why the hell are we paying £145 a year for complete nonsense like reality programmes and soaps. i would get rid of my sky subscription tomorrow and as we dont have an ariel could be tv free but i don't think my wife would go for it.
07/01/13 ssshhhhh
-9

Now that there is another royal baby on the way, I'm much more attracted to the idea of not having a television. The BBC will go full swing into sycophancy as it reports on an event that to Republicans like myself is entirely irrelevant. Another royal baby for my income tax and other taxes to pay for (unlike Starbucks etc), on top of all the other welfare babies in this country.
03/12/12 miserablemoaninggit
-3

Stalag, I remember one being brought to my school during a physics lesson once (over 40 years ago - ouch!). We were shown how it worked, very interesting, and I did understand at the time!
29/11/12 grumpyoldwoman
-18

They did exist, I have seen them on several occasions in the distant past.

Technically I would think it very easy to detect a TV. (Cathode Ray Tube )

With the right equipment, it was possible to spy on a persons Computer Monitor screen (CRT) because they had little or no shielding, and actually view the TARGET screen at a distance.

I also do not watch television, my decision was made when I saw the rubbish, the repeats, and the demoralising stories. These stories, soaps and others contain violence, hopping in and out of bed with others, and bad language. I also get harassed by letters from the t.v. licensing people. Even when i am 74, which is almost six years away, and i get it for free. I will still not be watching it.
29/11/12 Maxie
-7

we have sky tv but i am finding less and less to watch and am giving serious thought to cancelling the whole thing and just keeping the tv for watching dvds where at least i know ther will be no soaps reality programmes or adverts to sift through.not sure the wife will go for my idea though maybe the fact we would save about £400 quid a year with no sky or tv licence a year will help my argument,
30/05/12 ssshhhhh
-7