You're probably all sick fed up to the back teeth of hearing about politics in the news and getting the general election rammed down your throat.  Well so am I which is precisely my reason for this rant.  What annoys me the most about it all is the political mudslinging that has been going on since the date of the general election was first announced.  Over night all these billboard posters went up with each of the main political parties slagging off the other.  Bear in mind that this has all come hot on the heels of the whole MPs expenses debacle.

Do they really think that this kind of behaviour is likely to make the voting public cast their votes in their direction?  I think not.  In my area it was the Conservative party posters that caught my attention (not that I would ever vote for them anyway).  The Labour party isn't blameless either as we received a glossy card warning us of the imminent danger of not voting or voting for the Lib Dems and how this would ultimately mean a Tory government.  I guess they're assuming that no one around here will be voting for the Conservatives then! 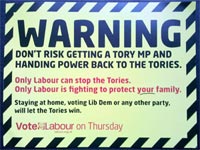 Also, in the last few weeks there has hardly been a day go by where some political pamphlet or letter hasn't been dropped through the door.  By the way, these have mostly been from Labour and Conservative and some of them have been personally addressed to either myself or my partner.  This is probably the worst kind of junk mail ever.  More mudslinging and bold promises that will no doubt never amount to anything.  They're also assuming that the voting public is to stupid to tune in to a political broadcast or have a look on a website.  The cost of each of these direct mailings must be phenomenal and if we imagine for a moment how much the rest of the campaign must be costing the mind truly boggles.  Where does the money come from?  No, hold that thought.  Perhaps best not to dwell on that one.

Actually, one particular political party has been rather silent in these parts.  We haven't heard a peep from the Lib Dems.  No posters and no leaflets through the door.  I can't say I agree with all of their policies but they might just get my vote this time round and my decision would be partly influenced by the fact that as far as I can see they haven't resorted to any name calling and also there's the fact that they haven't bombarded with unwanted mail.

Besides, they couldn't possibly be any worse than the Conservatives or Labour... could they?

The Whig Party slowly evolved during the 18th century; its "tendency" supported the great aristocratic families and the rich.

The WHIGS PARTY evolved into the LIBRAL PARTY, now the LIB DEMS. Say no more!!! And all three parties tell us they think only for the UK, what a pile of HS.
23/11/19 Jethro
6

'Tory' is a derogatory word used originally against people who supported James II during the exclusion crisis of the 17th century. It's an old Irish term which means thief, bandit or outlaw.

Looks like the Irish people have been more intelligent than the English, and have realised this fact long ago!!!!
23/11/19 Jethro
5

Even after posting a notice on my front door stating " NO POLITICAL LEAFLETS" the apparatchiks (morons) ass lickers still insist on ignoring it. This shows the ignorance of politically obsessed knuckle dragging followers. Here in Norfolk UK they have even brainwashed their breeding.
23/11/19 Jethro
5

So Camamoron tells 5 news " he wants to stop people coming to the UK to claim benefits". Bit late for that now isn't it you pillock. But I guess that's what pillocks do with only a few days to go before a major election. And they want us to vote for them!!!!!!!
09/05/14 Vote Ukip
0

"Unfortunately the sanctimonious left wing pricks cause more polarisation in society than religion itself." FL

If the Loony Left stopped beating the "minority rights" "political correctness" "you are racist" drum we could all live together in harmony.

Concerning election leaflets; our local BNP has issued a leaflet saying that they are responsible for the MP's expenses scandal being exposed, (Google "Heather Brookes" for the truth) and that Farage is FOR immigration (see edited video clip on net) total pack of lies!
05/05/14 Stalag14
0

To many Hindu people cows are sacred so cannot be eaten and to many Muslims pigs 'haram', or unclean this is said to be what sparked the 1857 Indian Mutiny. So both religions have different reasons for not eating certain meats. I suppose it is the same as us not eating meat on a Friday. The problem to me seems to be, the way religion is continuing to cause death & discord in civilised society. All religions need to take a long look at any form of caused death & the part they continually play in it.
05/05/14 boblet
0

No Mike , it's definitely in response to "customer demand" from muslims that pork has been taken off the menu at some stores. I know some muslims who sometimes eat meat that isn't halal, and some who drink alchohol, but none of them will touch pig meat.

Subway do make it clear on their web site that slaughter houses who supply them with halal meat must stun the poor creatures before their throats are cut.
04/05/14 Rosie Q
0

If it is true J it has me beat. Subway is a franchise outfit. Unless all the franchisees are into religion along with their punters.
04/05/14 boblet
0

Jethro, you are quite wrong. It is not because of complaints from Muslims, it is because of self-righteous pricks trying to be politically correct and bending over to offer what they think the Muslims want. It is also about market demand.

Unfortunately the sanctimonious left wing pricks cause more polarisation in society than religion itself.
04/05/14 Friday Lunchtime
0

They keep telling us we have to stay in the EU to survive, so how did we all manage before? I suspect it is only the rich and powerful that profit from Europe and wish us to stay, they don't give a damn about everybody else. You don't see many of these self righteous people living in highly populated immigration areas.
04/05/14 Vote Ukip
0

If at anytime I suspect that I'm about to be mugged by a British yob, I'm going to shout the magic word "RACISM" and watch the mugger quiver with fear.
04/05/14 Anon
0

Hi Boblet, Have you heard the latest piece of British cowardice, Subway food outlets are now banning Pork, bacon, and ham products because of objections from muslims. They now plan to serve only halal meats in 185 of their stores. Subway are about adopt Sharia law. I would not be surprised to see their profits take a nose dive as Brits boycott them.
04/05/14 Jethro
0

J. I am like a lot of folk, I do not really understand what is racism. I think that people have different opinions & understandings of it. Girls & boys playing cricket in a back alley in bradistan, is a pleasure to watch, whilst I wait in my car for an aged aunt. Then we have the bloods in German cars with darkened windows staring out at me. I notice the girls are all covered up with big head scarves & long clothes, they are delightful to watch but cannot score a run whilst thus impeded, by this religious garb. Their mothers wear beautiful brightly coloured clothes whilst trailing some yards behind the boss. Am I being racist for allowing these sights to colour my opinion? Or am I becoming intolerant to a certain religion that is in my face continually?
04/05/14 boblet
0