I met up with some friends from work in Coventry to do a ghost tour and parked my car in the NCP car park which is located conveniently near the town centre.  At the end of the tour I returned to the car park and went to pay at the ticket machine.  I put the ticket in and as I had been away for two hours and twenty minutes the amount requested was 4 which was all very well.

Luckily I had four pound coins in my pocket and with the exception of some large notes that was all I had so I proceeded to feed the coins into the ticket machine.  The first pound went in fine, then the second and third, but when it came to the fourth one it spat the coin back out at me.

Fair enough I thought, and put the money back in more carefully this time.  Same result, the coin went straight through the machine again.  I checked all my pockets to see if I had any other change but unfortunately I didn't have anything else except for the notes.

The screen still said I had to put in another pound...

I decided to try again because at the end of the day I've come across parking ticket machines before that are a bit twitchy and they usually get there in the end.  I put the money in again and this time it didn't get spat out, but it didn't register it either.  The screen still said I had to put in another pound.

As you can imagine I wasn't too impressed with this so I pressed the buzzer to summon the parking attendant.  I explained the situation and he opened up the machine.  The machine registers every transaction and yet had only recorded the fact that I had put in three, not four pound coins according to the parking attendant. He checked the coin reservoir, gave me the three coins sat in it and proceeded to close the machine.  I asked him to hold on a minute because I had put in four coins and not three, so where was the other one? 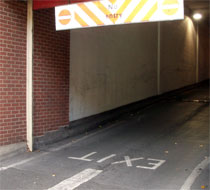 He just looked at me as if I was stupid.  I reiterated that I had put four coins in and not three to which he simply pointed at the screen and shrugged.  Well he might have just come out and said that he thought I was lying because as far as he was concerned the machine was right and anything I said didn't make the blindest bit of difference.  When I asked him what he was going to do about it he said "I can't give you a pound because it would have to be out of my pocket."  He then told me I should come back later on or better still in the morning when the cash has been counted to see if they have an extra pound.

I didn't think that was a very helpful suggestion because I had my young daughter with me, it was late and we just wanted to get home.  Returning the next day to see if they had my money would mean wasting the equivalent on petrol just to get there.  Besides, couldn't he have just lifted the barrier and let us out?  No of course not, how silly of me because we were obviously trying it on!  I was now going to have to pay £5 for my car parking instead of 4 and I didn't have any more change.  As it happens the husband of one of my friends had come back as all this was going on and had a spare pound to help me out of my predicament.

I know its only a pound but its the way the guy treated me to be honest that really irritated me.  He just didn't care, the machine said only three coins went in and that was that.  It kind of reminded me of one of those "computer says no..." scenarios!  Come to think of it, if you were diddled out of a pound every time you paid for something it would soon mount up, so loosing a pound to some faceless company with faulty machines and indifferent employees really left me feeling quite bitter.

I've just had excel parking fine me when I put £5 coins in the machine and they didn't register. Another man went to the machine and the same happened to him. So we took a photo of each other's reg. I sent all this in appeal and they're telling me they aren't liable and I must either pay the fine or appeal to IAS. I've hear IAS are in on it with them and I'll get the same response and threatened with court
30/04/20 Nels
0

On 18th May the NCP Credit card Machine at High Barnet Tube station was aout of order. Then the only machine avaialble is with cash. Unfortunately I did not have enough coins on me, so I left a ntoe in my car stating the machine was out of order. When I returned of course there was a PCN. I appealled this and have now been told that it is up to the driver to either display a pay as you go ticke or a seaon ticket - NCP do not offer Season Tickets at this station. Has anyone else had this problem?
15/06/11 Anonymous
7

Automat machines and the companies who operate them know that they can get away it, scamming you that is. There are no witnesses. No evidence. Not us milord, they say.

Bah, glue their machine up. Render it unfit for use. No witnesses. I can give you no witnesses.

What kind of council in the country charges for use of its car parks 24 hours a day, 7 days a week? A greedy, nasty council! Stop paying them.

Can we afford all this nonsens

I was very interested to read about your experiences with the parking machine because I have had a similar experience with a parking pay machine in Lytham which swallowed my £1.70 in 5p coins before informing me that the transaction was "aborted" and failing to either issue me with a ticket or to return my money. After displaying a note in my car windscreen explaining what had occured I didn't expect the parking ticket I found on returning to my car informing me of my £30 fine. I am currently in the middle of the lengthy toing and froing of letters to Fylde Borough Council who now wish to fine me £50. If anyone has had a sinilar experience I would be very interested in further ammunition!
13/11/10 Can we afford all this nonsens
11

I lost a pound too, in one of those machines which dispense 'ticklers'. There was no contact info on the machine and I was too embarrased to speak to female bar staff!
14/07/10 Jugg
1

Of course the attendant didnt care ... He isnt paid to listed to people complain, he paid his minimum wage salary to sweep the floor and empty the trash .. If he knocked on your door whining about this and that, would you break your ass to help him???
26/03/10 yeh right!
7

A pound can also buy a surprising amount of chicken and pork chops, mince and sausages; all knocked down an hour before closing of course as the man says.
29/07/09 H1N1
-3

oh dear... I live on a very tight budget, hence why I do not drive a car. I could imagine if one were so hard up that a pound was such an issue, then one should try walking or using puplic transport... imagine how many veg curries and cheap noodles that the savings would buy!
29/07/09 Phadreus
11

You can actually buy a packet of frozen mixed veg (quite a large one), a tin of curry sauce and an onion. Might actually have enough for some rice too and there you have it, a vegetable curry. I once managed to get 2 beef joints (normally £6 each) from tesco when they were reduced once (straight in the freezer). The cost to me was 90p - right time and right place. So that would be two sunday roasts for a pound - definitely better in my pocket than a car park machine!
01/07/09 Peter
9

I agree Pete, I enjoy the flavoured noodles from Tesco at 10 pence a packet. One Pound keeps me in snacks for a fortnight.

These corporate businesses have their money, keep on getting their money by means such as these grey, unsightly machines
01/07/09 Tony
-6

You shouldn't sneer over someone's loss of a pound. A pound is a pound, better off in our pocket than some faceless company. You can buy quite a lot with a pound still if you know what you're doing.

Yes, a machine tried it on with me too, failed to return £3. I ran across the street to the hardware store and bought some super glue. Super glue, 1 and 2 Pence pieces will sort it out.
19/05/09 LOL
15

I avoid city centres, and on the rare and unfortunate occasions when I have to go into them, I use public transport. Not because I can't afford to use a car, or because I feel unable to drive in city centres, but I find the whole process time consuming, unpleasant, and stressful.

I suspect that this is what the authorities are trying to achieve and the sooner cars are banned from city centres, the better, as they will then become more pleasant and environmentally friendly places.
18/05/09 MikeP
-3

I avoid NCP wherever possible from the parking charges they have. The last time I used them was in 2002 and I have only used them twice in total.

City centres are rip-off opportunities for this lot, so rather than even give them the satisfaction of having my custom I avoid them entirely and will inconvenience myself if I have no other option. It is known as having principles and I don’t care how much inconvenience it is. I have managed to find an alternate parking place without too much notable effort.
18/05/09 Nosy Parker
-10

Fruit machine not paying out winnings