I work at a site in an industrial area of one of the UK’s new cities.  As the only way to get there is to drive, the company has provided a fairly large car park with lots of spaces for employees.  I still can’t understand why some people have to park in such a selfish manner though.

I’m sure everybody has seen examples of the sort of thing I am talking about.  Some people are either really bad at parking or don’t care about others who use the same car park.  We have to hunt around to find another space because these idiots are occupying two, sprawled across both bays like they own the place.  Some even park in the disabled spaces, which is a complete disgrace because we have many visitors to the site, some of which I am sure would need to make use of these spaces.  But no, as far as these selfish people are concerned they got there first and they’ll park wherever they like. 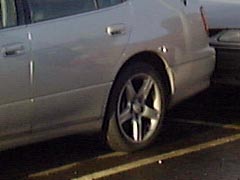 Several times this week I’ve seen this blue BMW parked across two bays instead of parked correctly in a single bay between the white lines.  What gives?  Are they blind or is it the typical BMW drivers ‘I don’t care’ attitude?  There’s no excuse for bad parking, especially as parking in a bay just happens to be part of the driving test!

I have another complaint about the parking habits of some people.  When you’re in a busy car park, for example a supermarket.  You drive round and round looking for a space and you finally spot one.  So you indicate and prepare to manoeuvre into the space, meanwhile some git just nips in there and steals it even though you were first to find it.  Honestly, it’s no wonder that road rage is becoming more and more common. People out there just don’t have any real common decency any more.

I was in a queue waiting at traffic lights and left a gap as requested by a “Keep Clear” notice on the road. But guess what? An impatient 20 reg BMW went over the other side of the road to pass all queuing traffic and pushed into the “Keep Clear” area.
Such people who go to whatever lengths to space-pinch (like money grabbers) have something of a narcissistic personality disorder to be so desperate to grab these quantities to compensate for inferiority of their inner-selves. Quantity (status, wealth, power, authority, speed, priority, etc) are all used by cowards and cheats to achieve something they aren’t capable of in a fair and proper environment. It’s only because they can abuse and cheat why they succeed.
30/09/20 CovidVillis
1

Well said anon. Whereas I would never condone willful damage done out of jealousy or anger, you don't need to be Einstein to work out what could happen to your pride and joy if you behave in such a selfish fashion.
23/01/14 Nikki
-1

Nikki, These people are not just thoughtless, they are brainless. Nice cars parked across two bays scream "key me" to some drivers and yobs that are jealous and angry and there are plenty of very angry drivers about these days that will damage a car just for the hell of it.
22/01/14 anon
1

To anyone else on this thread who thinks it's perfectly OK to selfishly park across 2 bays just to avoid your motor getting scratched, I will say one thing ... get a life and start thinking about others for a change, not just yourself. It doesn't matter whether you have a nice car or not, no-one wants to have their car scraped and scratched by thoughtless people, but you are hardly being fair yourself when you occupy 2 spaces.
22/01/14 Nikki
2

Have you ever stopped to consider that maybe YOU are being a tad selfish? Taking up 2 bays just so that your 4 sprogs can get out of your car easier! They are CHILDREN, presumably hail in mind and body, and are therefore more than capable of getting out of your car without bags of extra space!

Why do parents think that the whole world has to be revolve around their children ... it most certainly does not, and those children who are brought up to believe that they are the centre of the universe usually end up bitterly disillusioned and disappointed when they reach adulthood
22/01/14 Nikki
4

I park over 2 bays when no child spaces available as a normal space isnt big enough when u got 4 kids to get out of car. Plus i always find if i do park correctly some idiots park so close i cant get in my car let alone get the kids in yet surely they can see the child seats. ironic really
20/01/14 carmadbabe
-7

You sound a bit Germanic "Sterling Lichen" I am trying to find the English word for
Berwenbungsfarte but cannot, could you help?
25/10/13 boblet
-6

don't mess wit' a man's automobile - Dems the rules of the 'hood. I always park my ride in the underground parking bays, or at least try to park under a streetlight or a tall hedge. The presence of a police cruiser is handy to deter the douche-bags.
02/08/13 Joe from Splott
-5

Sterling Lichen -So you think it's fine to park like an idiot just because you drive a nice car? That's elitist bullshit
02/08/13 Anon
-1

I always park across 2 bays. I have an Aston Martin and have seen people purposefully knocking their car doors into my car just because they are envious of what is a very beautiful machine. A fine is cheaper than a visit to the body shop. Why don't people in the UK celebrate success? I have a Villa in Nice and people stop, smile and ask about my cars.Over here they would probably spit on you.
26/04/13 Sterling Lichen
-9

Yep I hate that too, so inconsiderate, its right up there with those people that put their towels on deckchairs to reserve them and disappear for hours
25/04/13 meagain
4

I never park across two bays and don't defend it - I was making a point about parking defensively to avoid people denting my car. There's nothing wrong in having a nice car but plenty wrong in having people who can't park making dents in it. Here are some tips for those interested:

In a busy car park, park between the best looking vehicles because the owners of these are more likely to have some consideration. If you park along the street, same applies but leave an extra 1 - 2 feet clearance. If you have the choice of parking on a quiet back street or main road, take the main road even if there's more traffic. Offenders hitting your car on a side street are unlikely to leave a note, whereas they will be aware of possible witnesses on a main road. They may be more careful too, because of this. In a supermarket car park, leave your car furthest from the entrance. In any car park, choose an end space when you can so that your car is vulnerable from one side only. Avoid parking anywhere you spot numerous people carriers or 4x4s loaded with kids in attendance. Most kids don't think when they open a car door as their mind is on other things, so you can be pretty sure one or more cars nearby will get dings and dents on the day.
In multi-storey car parks, drive right to the top and park there - especially if it's raining.
24/04/13 MG TF
-2

@GTO, I manage a small shop with limited parking spaces on a busy high street, if a selfish clown ' with a decent looking car' parks across two spaces on my park it means I loose custom and somebody else has to drive away. I therefore cannot understand your reply aimed at my orginal post, please explain.
23/04/13 anon
-1

"MG TF, So are you saying that you will park your car across two bays trying to keep other drivers away from your car?"

MG TF, So are you saying that you will park your car across two bays trying to keep other drivers away from your car?
22/04/13 anon
2

Cars that park too close to mine