Is it my imagination or are car parking spaces getting smaller?  I always try to park away from other cars if possible, but usually find, on getting back to my car, someone has parked their 4x4 right next to my 3 door Micra, making it a squeeze to get into my car.

Damage... a scrape from front to back...

Yesterday I had parked in two different car parks, one at a supermarket and the other was a local council car park.  When I got back to my car at the council car park I found damage to my nearside front wing i.e.  a scrape from front to back.  A woman in a big black 4x4 had been loading her child etc.  into her car as I parked next to her.  I heard a bang as she opened her rear passenger door against the car she was parked next to and found the damage to mine when I returned 15 minutes later, so it would appear her car was too big for the size of the space.

When I got home I showed my husband the damage, and then we found a scrape on the off-side rear wing which had not been there when I left home.  This must have happened in the supermarket car park as the car on my near side in the other car park had not moved.  I bought my car new six and a half years ago and apart from a small three prong dent on the bonnet caused by a stone thrown up from a passing lorry, it is or rather WAS as good as new until yesterday!! 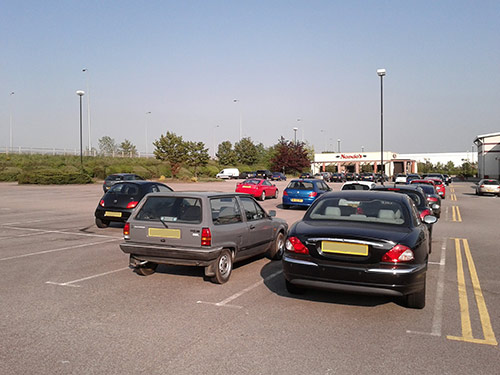 Car parking spaces should be bigger NOT smaller

Today, once again, I parked well away from other cars, but as I was loading my shopping into my car, a woman arrived and parked her car right next to mine and I noticed she came in at an angle and didn't straighten up, which left her front nearside wing about 6 inches away from my car.  If a car ended up parked on her off side, she could very easily do the same damage to that as was done to mine if she didn't straighten her car first.

Should the spaces be bigger?  Yes!  Definitely!  Car parking spaces should be bigger NOT smaller.  It's all very well trying to squeeze as many cars into a parking lot as possible by making the spaces compact, but the end result is whole load of bumps and scrapes.

Car parking spaces should be bigger NOT smaller. not only are they too small, but they are too expensive as well. It is a pleasure to drive in the USA where the spaces are much larger and free. Car Parking
03/05 Park Car
0

Drivers could be fined for parking on pavements.

If this goes ahead it will mean Sheffield will be the richest city in the world. LoL.
12/03/20 Jethro
1

Had the same problem in an NCP car park the other day.Just bought a brand new Pontiac & some clumsy clever dick dented my door on purpose.Kicked the side of their Fiesta & did some serious damage to their door panel.Serves 'em right.Won't be doing that again.Ha ha!
01/07/13 Mr Magoo
-4

Too Small By Half

Most of the sizes of municipal and NCP car park spaces were designed for Ford Populars or Hillman Minxes.

not only are they too small, but they are too expensive as well. It is a pleasure to drive in the USA where the spaces are much larger and free.
22/06/13 Too Small By Half
-3

I love bumping and scratching all the other cars [all frightfully more expensive than my own] in the typical British council multi-storey car park.

It's not a good photo for the article, but it was all I had to hand when publishing this gripe yesterday. The car park in the photo is actually quite good and the bays are wide enough. Incidentally, that's my old grey VW Polo in the photo. Gives you an idea how much smaller old cars are!
06/05/13 Kenny (Site Admin)
-3

You have to practice defensive parking today, which I described in a different thread on here. I've seen one or two individuals park on a street then take a photograph that includes the vehicles next to them. If they return and discover damage, they presume to have the evidence.
06/05/13 MG TF
-5

I think technically cars have got larger, compare a current 'super mini' with an original mini or a 60s Anglia with a Focus, both 'family' cars.
However, I think parking skills are general very poor, I have witnessed people forcing their car into a gap, not caring that they are scraping down the side of the car next to the space. The current driving test does not really prepare drivers for a visit to a car park.
06/05/13 Timelord
1

I agree and I have had my samll car ruined by dents and scrapes from the ugly big cars in the local supermarket carpark
I thing they should have special parking areas and not be allowed to park, box in and merrily get away with scraping and denting other peoples cars.
Sadly most of the drivers behave like thugs if you try to point out the damage they have done!
06/05/13 Fedup
-5

Cars that park too close to mine