Although parking can be a problem for many drivers in town and cities, there are many Park and Ride facilities around the country.  They are very useful except for one thing from my experience, Park and Ride bus drivers are the most spiteful in the country compared with other bus drivers.

On one occasion whilst doing the Christmas shopping in Preston I was with my wife and I had both our tickets.  We were getting slightly overloaded and so I thought I would nip to the car with it and come back empty handed to do some more shopping.

I got on the bus and tore off one ticket to which the driver asks me for the other ticket.  Thinking he was curious of something I did but he wouldnt return the ticket to me.  I asked for it back but he argued that if I was going back to the car and the other person wasnt with me the other person wouldnt need it and so he was confiscating it.

When I pointed out that I was going back to the car with the shopping, and then back into town to meet my wife and that we would be travelling together back later on, he still refused to return the unused ticket! 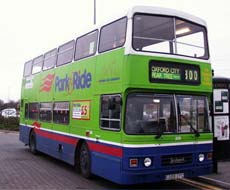 I put the shopping in the boot and went back to town and explained to my wife what had happened.  On the return journey I didnt have a ticket for my wife and so I told the driver of that bus what had happened the first time.  He was reluctant to accept the story and let her travel so we didnt bother travelling back to the car in their stinking buses and I have never used Prestons buses since!  I park down the side streets which I am entitled to do and wont park in the car parks.

On another occasion when I was in Oxford, I was walking towards a bus stop where an Oxford Bus for Water Eaton Park and Ride was letting passengers on.

As I got to the bus the driver closed the doors and whilst I was waiting for the door to be opened the driver read his newspaper and after about five minutes he put his paper down and started up.

There were about another five passengers waiting behind me but he drove off without letting any of us waiting at the bus stop get on and he saw me as I made eye-to-eye contact before he drove off so it wasnt that he didnt see me.  If he didnt observe me he shouldnt be driving a public service vehicle.

Utter tosh regarding the Oxford P&R. I have used it for years, and never had any problems.

Regarding the other "story", you should have bought an individual return ticket for your return to the car, and kept the original joint ticket for when you were returning with your wife.
17/03/16 jollym
-1

I need to add to my post below that the Cheshire West decision is on the Park and Ride services.
Apologies for any confusion I may have caused
09/04/13 paulR
-3

Cheshire West have decided in their wisdom to cancel concessionary bus passes for the elderly from april 1st 2013. It now will cost pensioners £2 each to go into chester. I have no problem paying but surely even asking for £1 would be better than cancelling it altogether. The buses have to run so why not allow the concession. Chester Business will feel the loss as many retired used it during the day and may not now. I will not use it I'll drive in and congest the roads and find somewhere to park for free. I will use other towns more in future such as Nantwich. Chester's loss. Cheshire West also put up the council tax by 1.9%.
09/04/13 paulR
1

Getting up at four A.M to go to work
Doing split shifts
Working late nights till 11.30pm, or later
Working at weekends
Putting up with Joe public
I think anyone would be grumpy
I expect the stock reply “if they don’t like it they should get another job”
Easier said than done
05/09/11 Stalag 14
-18

Rubbish bus service buses just turn up if and when they want to. I am disabled and have a bus pass. Often drivers are rude and not prepared to have the slightest bit of consideration for where and even giving you time. They always use the term people like you, well more people like myself should say tougth luck and should not be prepared to put up with this
05/09/11 Anonymous
-10

Funny, I work in Oxford and use the Park & Ride at least several times a week and have always found the drivers helpful and polite. Ok, I know where I am going and have a pass, so don't do more than say hello and how are you (you get to know them after all seeing them on a daily basis), but I also observe them dealing with then endless tourists who seem to mistake them for the local tourist office and ask them numerous questions which are nothing to do with the bus service. That and the people who ask if the bus is going to the city centre (the foot high letters on the digital display on the front of the bus are obviously not a clue - and no they do not have sight problems!!)
29/07/10 Vix
1

HA there are some people I tell you I do, they park and RIDE in those park and ride carparks, I had to cover my eyes, thats not right , I should say
14/05/10 hoho
6

Hey you folks, whats going on with your buses? Come to Salisbury and try our park and ride buses. Our drivers are polite, helpful and considerate drivers,most of the passengers respond to this attitude with a nice thank you when they leave the bus. And we have pretty well behaved teenagers who know how to travel sensibly.
08/08/09 Les.L
-16

Why is it that transit riders will frequently wait ten or fifteen minutes doing nothing and then look for their fare or ask the driver about the bus route after boarding? Even if the rider knows the bus route and has his fare ready, why will he sit surrounded by trash at the stop rather than pick it up and place it in a convenient trash can? Have you ever heard a woman say, "Ooh, look at that cute guy surrounded by garbage near the trash can ! "? Me neither.
04/12/08 Perfect Passenger
1

I live in Pudsey quite close to the new FTR (means future in text lingo) bus terminus. Its a new type bendy bus with full air con and is fully accessible. Sounds good so far but there is a more sinister non green side to the new service. I assume a requirement of the job of driver and conductor (pilot and host) is smoking and therefore they both stand on the pavement leaving the engine running and the fog lights and air con on.

The maths is tricky when calculating the MPG for a stationary bus and who would the police prosecute for the illegal fog lights when the bus is empty?
30/10/08 Mr P Norfolk
23

Ashley aged 11... not all bus drivers are evil, there are some excellent drivers with good customer service attitudes as well as fantastic driving skills. I speak on behalf of other bus drivers who are all tarred with the same brush, that they're all bad mannered, mean, spiteful and unhelpful.

As for the original poster... Preston Bus offer great park and ride services. I have found most of their drivers most polite, friendly and helpful. Which I'll go into below. As for the Preston Bus P&R service, I believe you pay for the service into Preston and back. The return fare is £1.20 per person. This covers you for the outward journey into Preston and the return journey back. If you need to use it again, pay another £1.20. Hardly extortionate rates in my eyes.

I had gone to Preston to ride on their buses. I had asked for a day rider type ticket but only had a £20 note with me. The driver issued my ticket but said he had no change. I did worry at this point but he then told me he can issue me with another ticket so that I could go to the information booth and they'd give me my change. Not all drivers, anyway, would have gone to this length to ensure my satisfaction. I think for some, it would've been too much hassle.

Another driver, this time female, really did drive fantastically. Gave the bus engine a good thrash but I felt safe throughout the journey and upon my return to Preston, I told her she'd handled the bus well and that I really liked her driving. She was a bit bemused that a passenger would say such a comment.
15/01/08 Youthful Griper
-7

When you're on their buses you don't like it when someone else is in charge and they can tell you what to do rather than the other way round.

Most customers who I see like to think they are in charge and inevitably like to dish out sarcasm and other forms of objectionable behaviour at shop or office staff. I think it's fantastic that when you people get to the bus you have to drop the drama queen act and get back to the real world. Because if you don't the driver can refuse to let you board or throw you off anyway!

I love nothing more than to see bus drivers puncturing the bubble of self-importance that most of you stupid passengers display! It's not the drivers who are spiteful it's you the passenger talking down to people again - you dick!
01/01/08 Sid
-26

Car parking in Summertown for residents only