Isn't it time for a competition enquiry into NCP?  Every station in my area with a direct line to London has outsourced its car park to this fine organisation, and I now have a thick file of dog-eared letters and e-mail print-outs to show for it.

Now, as a retail coward, I rarely complain, preferring instead to save time and pain by simply shopping, eating or viewing somewhere else.  I know I should try harder but life just seems too short, somehow.

It's hard to that when you have to get to London and you live in a village far enough away from the station that driving is the only viable alternative.  A couple of years back, when NCP took over the car park, they did two things.

First, they introduced 'pay by phone'.  Then they added 50% to the price of a season ticket.  I paid by phone and it worked well, right until the time I started getting 'penalty notices' under my wipers, even though I had paid by phone and had the texts to prove it.  I called them.  I was quite right, they said, I had paid.  Just ignore the tickets and they would be cancelled.

Then the letters from the debt collection agency started to arrive. I called the agency and explained that NCP had said it was OK.  Apparently everyone says that.  I called and wrote to NCP again.  They would call them off, they said.  Next week I got a letter from a firm of bailiffs. 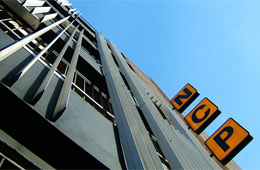 By now I was e-mailing, writing faxing and recorded-delivery-couriering everyone at NCP up to and including the CEO, but it wasn't until a very nice young man (must have been a temp) agreed that yes, the record clearly showed I had paid on the days in question and *agreed to e-mail me a screen grab* that, with this proof in my possession, I eventually got some sense from his bosses.  The letters stopped and I got a grudging letter of apology.

Now I pay by monthly direct debit and every month they send me a disc to display on the windshield.  During the postal strike the disc didn't arrive.  I called them. "I just want you to reassure me that you know I have paid so I won't be getting tickets".  They reassured and another disc was sent out.

Last week I got the first debt-chasing letter for the two disc-less days last year.  I may have to go and lie down now...

last I seen you was beneath the wheels of my bus. Before your last pitiful breath expires from your body do explain to all the poor commuters out there who are struggling with 20-30% prices rises above inflitian on their season tickets that the prices are 'fair'. And to all the shoppers who get flecced in city centres on a daily basis. Say it now quick before Mikie Junior reverses over you. Oh sorry, to late. Your dead and I am laughing my behind off. You were right, we did all have a good laugh in the end.

*Maybe I will have kids, have one grow up to be a bus driver *

If that is the highest aspiration you have for your children, it proves my point. Now go away and play somewhere else. You are beneath contempt.
03/04/11 MikeP
-12

Sorry Mikie boy but I misread your last comment, much to my dumb struck horror. YOU THINK THE CHARGES ARE FAIR?. My sweet lord. You can park all day in Newcastle city centre for £4. Clearly the town of stupidity has held an election for the stupid mayor and MikieP stupid has stupendously won with a stupidly historic landslide vote. Well done stupid (or maybe dumb and dumber is more appropriate under this most auspicious of occasions?)
03/04/11 minimomo666
-4

Oh mike. There was no expletives used in my last response. It must be you imagination inserting them in the right places. That your mind came to these vulgarities surley means you are thinking of your good self in the same manner the rest of us are. And I defend my intelligence by stating that I used no expletives in my last response but still clealry got my thoughts across about yourself while avoiding the swearing policy of this forum (which highlights an intelligence clearly higher than yourself or indeed the average NCP employee).

Can I state now that your are the t__t (again inserting the missing words: oh sorry thats me being thicking again) that started the name calling in the first place. Sorry it is my fault for descending to your crass and incompotent level. And another question: WHY OH WHY IF YOU THIN THE CHARGE IS UNFAIR ARE YOU DISAGREEING IN THE FIRST PLACE? I am afraid Mikie boy that any charges of dunder head, dumb head or any other d heads one can think of must be squarely placed at your door my good friend.

You are clearly not the sharpest tool in the set, Mr. Morrison, and if you are unable to express yourself without resorting to vulgar expletives, you are unlikely to go very far in life. Of course you have the right to make your views known and to expose your lack of intelligence to everybody. We all need a good laugh from time to time, thank you for providing it.

I happen to know that car park, I use it sometimes. May I suggest that you provide NCP with photographic evidence that the rates are not clearly displayed at the entrance, if this is the case, and maybe you will win your argument.

I do think the charge is fair for a popular city centre car park, and I have no connection with NCP other than as a user of this and many other of their facilities.

Next time take the bus and do everyone a favour and save yourself some money too - put it towards getting an education for your children if you have any, because with a father like you they won't get much education at home.
03/04/11 MikeP
-13

The parking charges were not at all clearly displayed, in fact there were not any at or near the enterance of the car park. Otherwise I would not have subjected myself to this forms of daylight robbery. So respectfully Mike go and f........ Your are a smart alec so go finish of the rest of my sentence.

I have the right in a democracy to make my views known, especially when facing such extortionate charges. I humbly suggest Mike, go and shove your head up your own [insert word strating with a] if you think these prices are just or fair, buisness or no buisness. If you work for NCP or are an ordinary motp defending this robbery, shame on you and the horse you rode in on. Just dont park at at the NCP (AS I WONT AND IMPLORE ANYBODY READING THIS TO FIND A CHEAPER AND BETTER ALTERNATIVE THAN THESE MONEY GRABBING B'S)
03/04/11 minimomo666
-21

minimomo666 : The parking charges are clearly displayed, £4.80 for 2 hours, £8.50 for 4 hours. Was it too hard for you to see? If so I respectfully suggest that maybe you shouldn't be driving a car.

You are aggrieved that you paid £3.70 for 9 minutes extra, but that is how business works. You feel they should have given you 10 minutes grace, then next time you, or the next guy, would expect 12 minutes, then 15, and so on. That is why the limit is there. 2 hours means 2 hours.

I am sure NCP car parks will be mortified if they ever see your complaint! Watch their shares go tumbling!
03/04/11 MikeP
-22

My complaint like it will make a difference (im sure a reply wont be coming):

I parked for 2 hours and 9 minutes on sunday morning, 3rd April at the Greenside NCP carpark in Edinburgh and was charged £8.50. This is completely extortionate and I will no longer be using your service in the future. Shame on you for exploiting drivers, its a disgrace and I hope others feel like me and boycot all NCP carparks in the future. I know WILL.

'ON site' Gatwick Aiport?..theyre having a laugh arent they?!
We truned up in a bit of a hurry at Gatwick a few weeks ago to find that our pre-booked 'onsite' NCP booking wasnt any where near the airport! Sure maybe we should have read the small print but hey we reasonably assumed that we would drive to the airport! AND they havent bothered to reply to my online complaint and I want my £45 back!
23/03/11 The frustrated traveller
-4

I had the misfortune to park in Cardiff Greyfriars NCP carpark today (25.3.11) - prices were not displayed, so I presumed they would be the same as the Capitol NCP (also within the city centre, and only minutes away) - I did my shopping, and returned 44 minutes later, to find out the charge was £5.90 !!! A couple next to me had been in the carpark for 2hrs and 20 mins and got hit with an £11.50 bill. How the hell can they charge such exorbitant costs, particularly so different to another NCP park with extremely close proximity, and not clearly display costs?? If you ask me, the entire reason they don't publicise costs if that noone would use the park - they are criminals - I will never use this carpark again, and will make sure I tell EVERYONE I know about it. Look up 'thieves' in the dictionary - I guarantee you'll see 'NCP' as as part of the explanation.
25/02/11 NCP ARE THIEVES
-2

I parked on the great northern NCP in manchester thinking it was secure parking - it should be for £14.50 a day.
anyway someone (i'm assuming a cleaning/maintenance employee) walked over the bonnet and roof of my car.
upon complaining to NCP they have refused to pay for the dint in my bonnet to be repaired - needless to say I will NEVER use an NCP crap park again! my car is safer left on a side street in salford - where its free to park!
10/02/11 fuming!
-11

Parked in Glasgow NCP car park paid a daily fee (£13) on returning to car with shopping and baby grandson. Apparently didn't move fast enough to get baby into car and pack his buggy and shopping away, as when I got to the exit barrier they demanded an extra £2.50 to let me out. Learned that even Scottish NCP car park barriers are operated from Croydon. To Martin of NCP, we scots may have a reputation for being mean but we never stoop to holding babies to ransom. Seems scrooge lives on in Croydon
18/12/10 Grumpygran
-9

The price rise of the NCP car park at Epping station is an outrage. Up from £.3.70 to £5.50 – a rise of 35%! A public sector worker whose very modest salary has been frozen for two years (assuming I am not made redundant in the meantime) means I simply cannot afford this daily fee. NCP claims the rise is because network rail stations charge more is no excuse. Nor is the claim of funding improvements. At Epping these were promised by the previous contractor when they hiked up prices. Very modest “improvements” were undertaken such as adding height barriers meaning when I had to call the AA because of a flat battery, its rescue vehicle couldn’t get to me. Some improvement. Yes, NCP has installed new pay machines. They are slow, go “off-line” and won’t accept money nor give change which is one of the biggest cons going in the parking business. How dare TfL allow its monopolistic contractor stitch up its passengers like this. Shame on thier management and the Mayor of London..
21/09/10 blacklace
-12