How much longer must we put up with the insane system of Council Tax imposed on us in this country?  I'm a pensioner, living in a tiny one-bedroom flat in London.  My Council Tax bill is over £1,200 a year and it takes away about one fifth of my pension - so work out what they leave me to live on!

If I owned a similar flat in Spain for example, my Council Tax would be more like £140 per year.  So what is it that they get right that we get so obviously wrong in this country?  It's simple.  In Spain such items as Police, Education, Health, Hospitals, etc.  are paid for by central government.  Local Councils only pay for such things as street cleaning and lighting, rubbish collection, etc.  (i.e. residents' priorities).

The Spanish system is fairer as it allocates national costs to the tax payers of the whole country (sharing these costs proportionately among the people who can most afford them) instead of penalizing a minority who are being taxed out of existence. 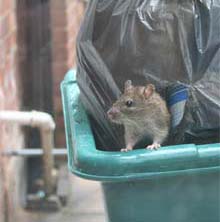 It's clear the Spanish system is better and we must ask why we perpetuate our out-dated methods.  Simple: UK Councils employ huge numbers of staff (many in non-essential, meaningless jobs) which not only carry inflated salaries, but they also draw "gold-plated" pensions as well, protected from inflation by index-linking which causes them to rise automatically every year.  There is no ceiling to these rises and the Councils must pay them forever.  The projected cost of such pensions is now hundreds of billions of pounds and Councils are still recruiting staff!

Councils now see that the cost of such pensions is spiralling out of control and they are desperately raising our taxes to pay for them.  Even more iniquitous, Councils are now getting rid of essential spending commitments so that they can divert more money to pensions funds.  Guess why they're really switching to fortnightly rubbish collections?

Adopting the Spanish system would probably put about a penny onto our Income Tax (expenditure would be lower following such centralisation).  Income Taxpayers and Council Employees will therefore not be happy.  But they are living in a fools' paradise if they imagine the UK system can continue.  More and more Council Taxpayers are finding it impossible to pay these unfair charges.  When financial meltdown comes in a few years time, everyone in the country is going to feel the consequences.

” With respect and sadness we report the death of a 51 year old gentleman as reported on 4UP by the close friend who found him dead: “Another one off ESA. My friend who I have been trying to help by getting advise from 4UP over the last couple of months DIED in a freezing cold flat on Tuesday evening. He went 14 weeks with no money only to be told that his no compliance for attending an assessment had been good cause and he was entitled to his money with back pay,back to 5/10/13. He never got to see a penny. His money was paid into his bank on the afternoon he died. He was so ILL he couldn’t make it to the cash machine.

Vote the Scum out

Abolish Local Government. It's a grand source of corruption and scandal.

Do your local councillors do anything real for you but claim expenses? Its a nice little earner for them.
17/02/14 Vote the Scum out
0

people who cannot afford to put the heating on should seriously think about expat to Indonesia. There all you need is a t-shirt all year long.
17/02/14 Nick
-1

As Im not a pensioner on a basic state pension I don't know exactly your situation but as a single person in a 1 bedroom council flat who works temp jobs for agencies for minimum wage I can see it financially.
The council tax on my flat is if I pay the full amount when in work that is, roughly £14 per week. The rent itself is about £75, so thats 90 gone before household bills like gas, water, tv licence, electric key, plus buses to work and then my foodshop.
I think that what they've done recently, cutting back council tax benefit so that even people on JSA who receive £71 per week before paying the above bills (rent is covered) have to pay a couple of £ a week is disgraceful.
My solution is thus: re-instate full CTB for JSA and those on old age pensions like my grandfather who's 87 and always worked until 71 years old yet still paying council tax,
Make it based more on income ie a base point to start paying from and homeownership as it based on the value fo your property which is pretty pointless to someone renting who can't afford a mortgage deposit.
Also, take it direct from wages as in USA where your federal, state and local taxes come out of your payslip without having to get in touch with the council like here.
29/05/13 ahforfoulkessake
-5

Other countries have Tax Free havens

Tell Your MP This Fact

I have to pay more in Council Tax in UK for our tiny apartment in London every month than I have to do for ALL the bills [water, gas, electricity, council tax, service charge, TV internet etc.] that I have to pay on our much larger and better, newer, plusher apartment in Portugal.

Paste the above link into the search box & support this petition to cut council tax for pensioners.
27/01/12 Charlie
-2

Lower council tax for pensioners - e-petitions
epetitions.direct.gov.uk
A significant reduction for pensioners regarding council tax rates. It seems unfair that the rate is the same when their income is so much lower (by not working). Those on benefits don't have to pay and it seems very unfair to ask pensioners with a vastly reduced income to pay the same as those who ...
27/01/12 Charlie
3

My council tax is £16.96 per week out of my total pension of £107.74. I can't afford to have the heating on in winter - I've never had my boiler serviced - it's too expensive - & I set my heating to only 5 degrees throughout this winter - to stop the pipes & boiler from feezing. I wear lots of layers & use a blanket & hot water bottle to try to keep warm. Life ain't much fun on a pension.
01/04/11 Charlie
2

Council tax non payment punishable by imprisonment including pensioners, and disabled,What about poor services non collection of rubbish unswept and non gritted streets, housing benefit delays,obnoxious council staff typical government dept behaviour. Who punishes the council non accontable bigots.
I fully condone assaults on these people.We are at there mercy all the time the only way through is a leghthy complaints procedure of 3 months before it allows to reach the council ombudsman who are another load of overpaid bigots.
25/12/10 yo sushi
6

this country is full of scum starting from the top, always trying to screw the poor,
26/10/10 rickyrass
13

What has council tax to do with a property anyway? We all get the same services so we should all pay the same amount of council tax. The size of the house doesn't always reflect on the income but it does reflect on the cost of running it; repairs etc.
26/10/10 pollywolly
-4

I am trying to get my local council to give me an answer to why we pay them council tax to deal with the rubbish and recycling and yet are expected to do it ourselves. So far they have come back to me to tell me how to clean out any tins or bottles I may have. I think this is insulting. I also asked them whether they could not organise all the terminally workshy people in my town (and believe me, there are plenty) and those doing "community service" to do this work. No answer yet. So far the tax payers of this town have had to pay for a lot of different size boxes which can't have been cheap, and enormous vehicles to deal with this nonsense. I am not against recycling in the least. This is all to do with huge fines being imposed on them if they don't toe the EU line.
17/09/10 Anna
-10

Why do I have to do everyone's job for them?