Well, I had hoped that Boris was going to dial the nanny state down a bit, but since China unleashed Covid 19 onto the world it has gone into overdrive.

I was a teenager in the late 60s when the Asian flu was around.  It was a much worse illness than Covid 19, but back then we were trusted to mostly look after ourselves and took the risks of life in our stride.  I don't remember hearing much about the Asian flu, it was on the news I suppose, but I never heard personally of anyone dying from it.  If anyone had suggested a lockdown they would have been laughed at.  Apart from ruining the economy people would have seen it as a gross infringement of their civil liberties and would never have stood for it.

Nowadays we have become so risk averse that we have put up with all the restrictions.  I do wonder sometimes how the human race would ever have got started if people had always been like this.  The first humans would have been too scared to leave their nice comfy caves to go out and hunt for something to eat, so would have starved to death.

We were told for ages that masks were not really any good except to help frontline medical staff, but now we must wear them when we go to the shops.  I suspect that the novelty of actually being allowed to go shopping again will soon wear off when shoppers realise how uncomfortable it is in a mask, particularly if you wear glasses which keep steaming up.  Then there are the queues to get into some shops, that's not going to be popular in the winter; and the stupid one way systems in some shops.  I went into my local Superdrug last week.  There used to be breaks in the fixtures running the length of the shop so it was possible to go from one aisle to another halfway down.  These have been blocked off so now it's actually more difficult to avoid other customers.  All of this of course won't help the economic recovery one bit if it puts people off going shopping. 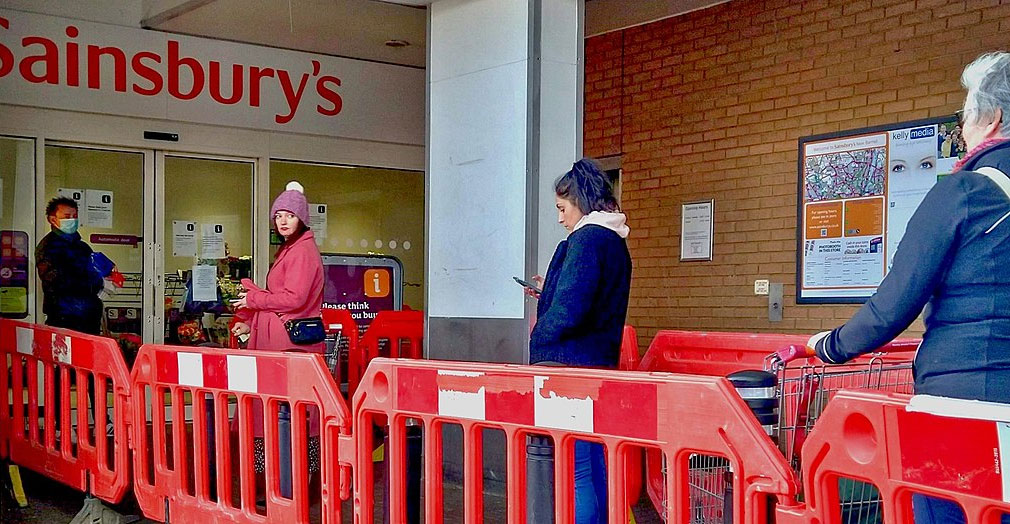 Another thing that won't help the recovery is the to-ing a fro-ing about where we can go on holiday.  Retired people may be able to cope with two weeks quarantine if it should be deemed necessary when they get home, but it would be very awkward for many working people.  Even the mighty British Airways is on it's knees, and this really isn't helping.  We need to get back to normal, the old normal that is.

Then there are the numbers of people killed by this not really very serious illness.  Apparently about 78% of people who've tested positive have had no symptoms at all, the other 22% include those who've only had mild symptoms.  The numbers put out of "Covid related deaths" have up to now included patients who recovered but died of something else later, which has finally been admitted.  Numbers of people dying over the last few weeks have actually fallen because large numbers of people killed by Covid 19 would have died a few weeks or months later anyway.

These figures of course encouraged people to stay at home during the lockdown, now too many are scared of going back to work because they think this deadly virus is waiting for them.  Too many who have swallowed the hype about the virus have also turned hyper-vigilant, screeching about people daring to go to the beach, when in reality it's probably perfectly safe.  The virus doesn't transmit easily in the open and the only beachgoers likely to get close to each other are children who don't pass it on readily.  This is something the teachers' unions really need to get their heads around too!  The education of a whole generation has been damaged far too much.

The lockdown will undoubtedly cause more deaths than it has prevented, it was done to "protect the NHS", yet in may areas the NHS was sat around twiddling its collective thumbs as the hospitals and surgeries were more or less closed to anyone who didn't have Corona virus.  The Nightingale hospitals were barely used.  Still, nobody could sue the NHS for catching Corona virus when attending an appointment!  Many patients with serious illnesses who have missed vital appointments will die, as will many who were too scared to go to their doctor or were not allowed to make an appointment.

There will also be many deaths due to the economic crash, businesses will go bankrupt, jobs will be lost, people will lose their incomes and their homes, and all taxpayers will be squeezed to make up the difference between money going to the government and outgoing in benefits and services.  Local councils will be in trouble too with falling income because of so many empty shops.

I'm really beginning to despair of this country and it's future!  The more we are protected from all the normal risks of life the worse it gets.

If all indications of the new OMICRON (covid) mutation are correct, and the panic within governments around the world are established to be true, then one of two options will become evident. Continue to pump financial resorces into fighting it and maybe see a worldwide full depression, or, let it run it's due course hoping for natural immunity. This virus with it's ability to quickly mutate has been one step ahead of mankind from the start, because mankind is fighting itself and not united.
29/11 Jethro
2

Perhaps it's now time to accept that COVID ( and any other pathogens in the future) and variants of COVID that are developing worldwide will not be beaten untill mankinds balance is brought back to managable numbers. Perhaps COVID or other will in the long run be Earths saviour.
26/11 Jethro
6

Hands up all those that are ready for the next total UK national lockdown as this new variant of COVID from Africa finds it's way into the country. Unlike the human race, this virus can adapt to survive when threatened. "Mother Nature" is a loose term to explain the forces that control the balance of life on this planet. Mankind has abused it's place, and will pay the price eventually.
26/11 Jethro
0

There is no God, only the belief of one. The comfort blanket, the last cry for help.
The human race is now showing signs of decending into it's former self, animalism. The survival of the fittest and strongest is begining to shape the destiny of life on planet Earth. Mankind cannot adapt to survive, we are all too greedy and don't care about the future. Over the Eons of time, life on this planet has been controlled by the balance of life and it's influence on it's surroundings. This balance no longer exsists. The question is, what form of life will evolve after mankind has ceased to exist?
29/08 Jethro
1

It puts it all the consequences into perspective.
19/06/21 grumpyoldwoman
1

Call it what you like but at my age, I am aware that I do not have time to waste. I do not believe I have the odds on my side, when you are younger it is a different bookie.
20/01/21 boblet42
2

And God help you if you're actually ill with anything else, the NHS won't.
05/01/21 grumpyoldwoman
0

Here we go again! Another lockdown, when it's obvious they don't work. But of course it's always the fault of the "covidiots" who don't follow the rules. Has anyone ever researched this and traced infections back to particular people who broke the rules?

The NHS are moaning again about being "overwhelmed". At this time of year they always are, covid 19 or not. They waste too much of our money on managers sitting in offices with huge pensions at the end of their careers so there's not enough left for actually treating patients.

As for the vaccinations, my mum hasn't had one yet and she's 93. Not even a word about when she might get one. Meanwhile all the retired doctors and nurses who are volunteering to give the jabs have to go through courses in diversity, lifting heavy weights, fire procedures and radicalisation. You really couldn't make it up.
05/01/21 grumpyoldwoman
0

But first the rich and the elite will be prioritised, screw the rest of the little people. The rich and elite are the ones that matter. We rule the world.
05/12/20 Jethro
0

Coronavirus vaccine will be 'as safe as it can be' but scientist will admit there is no 100% guarantee in honesty-first fight against anti-vaxxers.

I, for one, will stay well clear of this vaccine as if it was the black death. Take your chances with this at your own peril.
07/11/20 Jethro
0

Thanks for the link John, I will find time to read it as soon as I can.

One thing that occurred to me several years ago is how the Nanny State is driven by solicitors being allowed to advertise, followed by unscrupulous lawyers touting for business, telling people they can get compensation for this, that & every other thing. This was followed by the upsurge in warnings all over the place replacing common sense.
06/11/20 grumpyoldwoman
0

@grumpyoldwoman
A good article, but it explains the consequences not the cause. For the last three decades the west has been under the grip of cultural Marxism. Hereâ€™s one from me. No download, scroll down to read.

Mass immigration to reduce tradition and patriotism, equality to produce collectivization, political correctness to stifle dissent, the decline of Christianity replaced by politicians as moralists â€¦

Those of us who write about this knew what was going to happen decades ago, but the question now is, where do countries go after an onslaught of mass-stupidity? The answer is the beginnings of authoritarianism, which is what youâ€™re now seeing.
05/11/20 John V
2

Hi John, Laurence Fox speaks a lot of sense. This article is interesting.

Weâ€™re the same generation, Grumpyoldwoman. Covid is a flu, an airborne virus, you canâ€™t stop it with or without a piece of paper covering your face. From the EU trying to create a multicultural utopia, to the extinction rebellion and now a flu that is going to kill millions (well could, maybe or perhaps); we really have entered an era of stupidity. No good blaming China anymore, weâ€™ve brought this economic wipeout on ourselves.

The danger now is that after economic and social upheavals, historically countries tend to go to war to gain the upper hand and keep the status quo. Iâ€™m looking at the demonization and propaganda against China and Russia who have kept the liberal west at a distance and Iâ€™m not optimistic about the future.
03/11/20 John V
0