I wish to gripe about people who go on strike and cause mass disruption to innocent members of the public.  Sadly, there are many examples to choose from.  I'll just pick the ones that have annoyed me the most in recent years.

Postal workers.  What exactly gives them the right to deprive people of their post?  Innocent people could have been deprived of anything from birthday cards to x-ray results.  People could have lost money because of late delivery of cheques or legal documents.  The possibilities for suffering caused by this are endless.

Fire fighters.  These heroes have gone down in my estimation. They have absolutely no right to put lives in danger during their squabble with their paymasters.  How dare they leave people to burn while they sort out a problem with their pay packet.  What happened to their principles, their priorities, their morals?

Public transport workers...  Once again the innocent public are made to suffer... 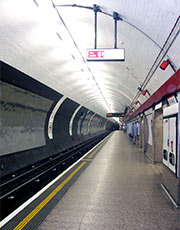 Public transport workers.  Once again the innocent public are made to suffer because of the gripes of a minority.  Lack of transport is a serious matter.  It stops people getting to their jobs.  Stops them getting to visit relatives in hospital.  For many elderly or vulnerable people, public transport is a lifeline.  Why make people suffer?  It's not their fault!

My general gripe with strike action is that they happily accepted the pay and conditions when they took the job...  So if they didn't like it, they shouldn't have taken the job.  The vast majority of us, when we need better money, go look for a better paid job.  What gives anyone the right to stamp their feet and throw a tantrum because they want more, instead of doing it the hard way?

There are thousands of unemployed people out there who are lining up ready to work for any sort of wage.  There are people who'd gladly step into the role of a tube driver or postman tomorrow, at the same or less wages than the going rate.  There are thousands currently in work who are currently taking pay cuts just to keep their jobs, and thousands more who've been made redundant.  Tell me, how do you think it looks to those people, when they see spoiled arrogant brats, still in full employment, moaning that their lot isn't good enough?  It's an insult.

Strikers?  Sack the lot of them, and give their jobs to grateful people who are ready willing and able to take them.

Is the writer of this article a child?! Strike action is one of the only tools workers have to improve their work conditions! Quite simply, public frustration is a very powerful motivator for fat cat bosses who otherwise would ignore the requests by their workers. Taking a job is not a choice! The Job Centre pretty much strong arms you into any position available, and the need to keep oneself fed and clothed adds pressure to take what you can. However the best of several bad options is still bad, and tools are required to force pro-social attitudes behaviour from otherwise selfish and greedy bosses. If you want striking to stop, support a living wage and decent working conditions, otherwise this simply reads like a childish tantrum...
03/11/14 Mat
-1

Tube drivers are the scum of London - they get paid ridiculous amounts of money for being lazy and going on strike once every month.
21/10/14 Dead and Buried
0

i understand your point My local council was going to go on strike which would have meant bins wouldnt have been collected that day and they would have had to wait for 2 weeks to have that bin emptied and they wouldnt go back to empty it :O.
So if it was refuse you would have a 4 weeks worth which is nuts. Luckily it got suspended all they wanted was a wage increase of like 2% which is rediculas I earn 7.28 an hour I am happy with that I would never strike
21/10/14 Mr H
0

Jobby, by reading the increased volume of posts you are making, one can only come to the conclusion that you are in quite a state of termoil. You are not hurting other people on this site with your sniping posts, you are only beating yourself up. Get help.
28/06/12 Jethro
10

Gainsborough Lad - I wonder if the people who say that tube drivers should not have to work on Boxing Day and that everyone should get the day off can, hand on heart, claim that they have never gone to the pub or a restaurant, shopped or filled up the car with petrol on Boxing Day.

I think that drivers and other staff should be well paid and get a day off in lieu for working Boxing Day, but it is part of their contract and they knew when they took the job that they would have to work that day.

As it is London is the only world class city that does not operate a basic public transport service on Christmas Day for people who want to visit family or who have to work, as many do.

As for it being a tradition that goes back centuries, there has always been a tube service on Boxing Day as far as I know.
26/12/10 London Geezer
-7

Strikes are a last resort. The management of most modern organisations refuse to negotiate. Management have strong PR departments so they are never seen to be in the wrong. Workers on the other hand seem nowadays to have few rights to renegotiate their remuneration. It is as thought they had no right to do this at all - result a strike. Management are equally to blame.

Management use the public to back up their claim that they are right, when in fact in mamy cases they are stubbornly wrong.

Just received this morning, please pay particular attention to the following advice: Cycling or walking may be practical options for many.
email from TFL: Dear Ms M,

I am writing to let you know that the ASLEF union have called a Tube strike. If the strike goes ahead, there is likely to be significant disruption to Tube services throughout Boxing Day, Sunday 26 December.

Bus, DLR, Tramlink and River services will operate, although some of these will have a reduced service. Cycling or walking may be practical options for many.

Please check local news and travel reports before you travel. To plan your journey in advance, or for live travel news on the day, please visit tfl.gov.uk/tube

Please also note that on Christmas Day, Saturday 25 December, there is no service on the entire network, and on Boxing Day, Sunday 26 December there will be no London Overground service. For a comprehensive guide to services during the festive period please visit tfl.gov.uk/festivetravel

Dear Mr V Everitt
Please tell your few selfish workers that cycling or walking is not an option for the millions of commuters that wish/have to travel on the 26th. I hope that their families are very proud of them as no one else is going to be. With regards, a few million londoners and visitors, Merry Christmas.
23/12/10 Clarite
-6

People who strike for more money should not live beyond your means, if your wise your legal minimum hourly rate over 40 hours plus any benefits you can claim should keep your head above water, or you could just find a higher paid job.
16/12/10 tramp
-15

I think it's funny how people who provide proper services like firefighters and nurses get paid a mere fraction of what bankers and city workers get paid, when the only service they provide is a pocket lining service to themselves. For a lot of low paid workers who provide real services, striking is the only tool they have to try and get a fair wage.
07/11/10 anonymous
-1

Yes, for the love of God don't strike. Don't point out that your jobs are important. Don't let the public see how you're being exploited. Come on people, striking is the last bastion of resistance we have. I love how people complain that their lives are disrupted when essential services strike, but they don't want them to get paid their worth. Funny that.
26/10/10 Dee
-14

Yet again, we've had to brave the commute to work. 6 hours just to go and do my job. A pregnant colleague of mine had the same, and all because she has a sense of dedication and public service. As HOSPITAL doctors (NOT GPs), we arent happy with our terms and conditions either but the thought of striking to make other people's live a misery doesn't enter the equation.

Bob Crow should grow up. It's a recession. Deal with it. Or, if they persist, SACK them all. There are enough unemployed people out there who would jump at a £40000 per annum job with little training needed (the trains on the Victoria Line have been able to run automated since 1964). GROW UP. If you don't like it, let someone else do the job and see if your overpaid, underworked brains could get gainful employement elsewhere. I think not...
07/09/10 BobCrowIsTheDevil
-10

Strikes are not the ultimate solution, nor are they the preferred one. Often there is a lot of hard negotiation before that last resort strike is decided upon. I don't agree with them, but I do agree with Matthew below.

In some cases strikes may be the only way to draw attention to conditions of work eg nurses with heavy workloads because of reduced staffing (the heavy workloads may mean working non-stop with the addition of cluttered or difficult environments and dealing with difficult and demanding members of the public, and senior staff - which whilst tolerable under normal economic climates, with a decent level of staffing, might become barely tolerable/ intolerable under harsher economic climates)...

...which people who condemn those striking may not have factored into the equation.

I have of course encountered those working like this who say 'But the job of .....is a vocation...therefore we should accept .... and .....'. Interestingly those that have said that have

a) suffered a nervous breakdown because of their own desire to do everything and be sacrificial
b) occassionally take long periods of paid sick leave, leaving other staff to cover their work
14/04/10 Joanne
-3

People don't generally strike because of their EXISTING terms and conditions / pay.
You will usually find it is due to employers proposing new T & Cs that may mean less pay for more responsibility, or failing to provide adequate pay rises in line with other employers.
Strike action does cause massive inconvenience and this is why it is used - to create a situation whereby the employer has no choice but to back down. Remember that union members lose pay and some benefits when they strike and although it seems to happen a lot, it is usually the last resort in a very long chain of consultations. You have to admit that being given more work and responsibility for less pay, or being made to work in unsatisfactory/dangerous conditions, would upset anyone - the difference is do you sit and take all your employer's crap or do you join the union and exercise some people power?
28/02/10 Matthew
-8

aleedsfella 28-Sep-2009 20:59 you got it bang on mate.
Its like leading lambed to slaughter? Most of the British people are on drugs or to busy playing games or seeing psychologist to even know what is happening?
10/11/09 get it right
-9