A few news headlines have been brought to my attention that quite frankly make me sick.  The one that springs to mind is the one about the jobless couple raking in £815 a week in benefits and yet moaning they don't have enough money.  Here's a little bit of history though, perhaps you'll understand why I am so angry at this.

About a year a go my brother was unemployed and actively seeking work.  He'd been for loads of interviews and those jobs included minimum wage jobs.  Part of the problem is that he lives in mid Wales and to be honest there isn't really much in the way of employment there anyway.  He's a skilled engineer but he was prepared to take whatever he could to earn a living.  It's not easy finding work in the middle of a recession when you're close to retirement age anyway, but in that part of the country, at that particular time things were particularly difficult.  Anyway, he'd had an interview at a local Tesco which had just been built and was about to take on staff.  Unfortunately he wasn't successful (sheer numbers I suspect) but the main problem was that his unemployment benefit and housing benefit was cut because of some sort of communication problem.  Apparently the fact that he'd been for the interview hadn't been registered. 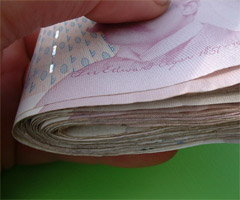 As I said, things were pretty tough up there anyway and at the time he lived in a remote location and didn't have transport.  He had to spend what little cash he had on buses (very few of these) to sign on and go to interviews.  Whenever he tried to contact the job centre to get it all sorted out, he was passed from pillar to post, someone would ring back, there's nothing we can do etc.  etc.  He even ended up getting in touch with the guy at Tesco who interviewed him to try and sort it out, but the job centre were adamant that he wasn't looking for work and that was it.

The outlook was bleak, no money, none coming in and no job.  Also, it was November and the weather was starting to get cold in Wales.  Did I mention that my brother is also a diabetic?  This wasn't a good position to be in at all!

Things weren't going to great for me either.  I'm self employed and don't earn a lot myself (probably less than 10K a year).  I had a tax bill coming up as I barely earn enough to live on anyway, I had to do some temping to earn the cash to sort that out and pay off my overdraft.  Luckily with the extra temp work I was able to arrange to have a bag of logs sent to my brother that week just as a big freeze took hold.  He was spending a lot of time wrapped up in blankets just trying to keep warm.  I dread to think what might have happened otherwise.

working in a factory on a minimum wage...

Personally, I've never ever claimed benefits and always managed to get some kind of work.  Even if it is working in a factory on a minimum wage.  Luckily there's plenty of that around where I am if you're prepared to do it.  I'm aware that some people aren't.  Last November I was up at 5 every morning cycling through the snow and whatever to do a manual minimum wage job to pay my bills.  My brother and I are quite prepared to do this as there's a sense of pride in our family.

It just makes me so angry when I read these news headlines about families living off the state in nice houses with all the comforts of home including Sky TV, games consoles and hundreds of pounds to live off.  Then on the other end of the scale the help that is supposed to be available for people actually looking for work (my brother for example) just isn't there.

I also remember reading an article at the time about a family of asylum seekers living in a luxurious home worth millions.  Okay, the tabloids are all about sensational headlines and I'm sure these are minority cases (I hope), but the fact is that our benefit system is quite screwed up.

I'm off to my temp job now again.  Tax has to be paid after all so that some can live in luxury!

That's a good point Mat. Whilst there are unquestionably a few people that have managed to exploit the system to the max, much of what is written is tabloid nonsense. Those that are on benefit but are living the life of riley are generally doing so because they're also working whilst claiming.
Don't consider yourself to be a 'grass' if you report somebody doing this though. If you don't report them you may as well go and hand them some of your hard earned cash. You're basically doing that anyway and they don't deserve it.
03/11/14 Samson (Delilah's too busy to post)
0

Tip: Don't read "these news headlines about families living off the state in nice houses with all the comforts of home including Sky TV, games consoles and hundreds of pounds to live off." It's rubbish. You are victim of the tabloids. Try reading the data, not some moron's opinion of it...
03/11/14 Mat
0

I read the article in the link , they probebley wouldnt *struggle* if they stop buying stuff they don't need and they are lucky to get what they do they are people that work that don't earn that in a month :O
20/10/14 Mr H
0

Now the wannabe model who had NHS b00b job gets £6,000 of cabs on the taxpayer because she gets too much 'hate' on the bus - and says we should be GRATEFUL it's not private hire cars

WHAT A FCUKING JOKE ,PEOPLE UNABLE TO FIGHT THE SYSTEM WITH NEW LAWS TO ESA & JSA AND THIS SCUM BAG GETS IT ON A PLATE !
23/06/14 Bulldog
0

can assure you its not the benefits that are keeping them going they will steal anything do anything for their drugs , im 60 on job seekers allowance 75 pounds a week 35 for coal 14 for electric 5 pounds a week for water an sewrage that leaves me 21 pounds to feed and cloth me so dont think were all living the high life cause we aint .
28/05/14 racehorses22
0

I've had yet another sleepless night due to upstairs neighbours smoking pot and setting all the alarms off. I was supposed to be at my desk by 8.30 and here it is after 9 o'clock. They spend all day in bed watching daytime TV and then smoke most of the night. In the building where we live, all the alarms are linked so each time they smoke a bit too much, 14 people end up having get out of bed and go outside. Yes, I'm leaving soon but doesn't it make you realise how crazy the system is? There are some people on coke and heroin - A class drugs that were once taken by the upper classes. Now, anyone on benefits can afford them!! How did Britain get in this mess?
20/05/14 sleepless in Wrexham
0

@Fed up, You are correct job vacancies are advertised outside the UK, a lot of recruitment agencies do receive cash bonuses for openly discriminating against UK applicants as do some unscrupulous employers, people like C**** H***** are basically traitors, he is not British, not very keen on us and not a very nice person, to come to this country and abuse our kindness is one thing but a lot of amoral British people also participate in this disgusting act of treachery and take money for selling their own people out, these people are reminiscent of collaborators who side with the enemy and would probably pimp their kids out or sell their grannies kidneys, I have no respect for these quislings and hope one day they are put out of work themselves and come running to me, they will be sent packing courtesy of a swift boot up the rear, I on the other hand have been offered cash incentives and other 'perks' which I have refused on moral grounds, unlike the vermin who sell British people down the river I have principles and a conscience, I am not a religious person but if there is an eternal lake of fire these spineless, wimpish backstabbers will surely be thrown into it for all eternity and if the Devil himself does exist he will wash his hands after coming into contact with the lowest of the low, I have nothing but contempt for these pondlife.
20/02/14 Tired and emotional
-5

@ Marmalade. I'm not sure that it IS nonsense. When you take into account all the various things you can claim for, it can be quite a bit (child allowance, disability allowance, housing benefit, free dental care, glasses etc.) My neighbours don't work and they brag about how much they can claim and urge me to do the same. I've stayed with old school friends who are now on benefits and they say that they're doing ok, thanks very much. They certainly seem to have a better lifestyle than I do. By the way, I'm not gullible, I'm just going on personal observation but that particular story in the Guardian (by the way) appeared to confirm what I'd noticed myself.
20/02/14 Struggling
0

Struggling, The current government and the right-wing tabloids rely on gullible fools such as yourself to spread this nonsense.
13/02/14 marmalade
-1

This government and the last one to be fair are sending 12 to 13 billion a year of your money your taxes to other countries and you dont have a say in it they use your taxes for their expenses lets not be kidded here, they dont need to touch their wages , do you get to claim expenses how many of you commute to london an it takes you more than an hour ? can you claim a second home and all the furnishings and food for the month ,its not the people at the bottom we have to fear its the ones at the top of the tree .
07/02/14 racehorses
3

well i would have £254 in my hand but it doesnt work that way i get £105 a week pay what a have to pay an left with nothing so where the idea that they get all this money is ridiculous . 1 per cent of the benefits bill is used in this way the rest are people who are working and on benefits because employers dont pay a living wage and they need benefits to keep them going so are you saying we should cap them as well and the rest goes on pensions are we to cut them back too ?.
07/02/14 racehorses
1

Single mums = chavettes who pop out as many sprogs as they can in order to claim benefits and a large council house. They don't even know who their children's fathers are and they don't care. Hoopy earrings, piercings, tatoos, alcohol, tobacco, drugs... - those are the things they spend their dole money on.
Single mothers need help? Nah nah nah you must be joking.
07/02/14 Nick
-2