My gripe is exploitation of young workers!  My son signed a contract on December 19th 2005 as an apprentice joiner to a local firm.  By the contract date I would say that he is now into second year and due for a pay rise, but thatâ€™s not how it works - or so it would seem.

His year apparently didn't begin until he started college in August 2006 so he therefore wonâ€™t receive is second year apprenticeship wage rise until around August of this year!

What exactly was the point of the contract in that case?  None I reckon, because itâ€™s obviously not worth the paper it was typed on!

It also means that this joker that he works for has had nearly nine extra months of work out of him at the first year apprentice rate of pay.  Employers shouldn't be allowed to exploit young people in this way. 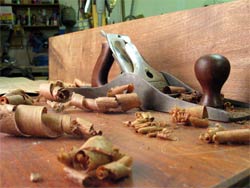 He actually started work as a labourer in November of 2005 with view to an apprenticeship.  At the time he was getting paid (yep you guessed it) apprentice wages.

This rat he works for has made quite a saving out of my son as he should have by rights had the full rate of pay for a labourer during those nine months.

Does anyone know where we go to fight his corner and get some cash out of his boss for hard work he's put in up until now?

So far I have tried the CITB.  Nice guy, but it turned out to be a complete waste of effort as they found in favour of employer.  I wouldnâ€™t bother with them, youâ€™ll get no back up there!

Dont know if anyone is still reading this. My son has been on an apprenticeship for nearly a year with Cheshire West & Chester council, they never gave him his training just a promise we will sort it. Last week they sent him finally for an interview at the college a year later, found out that because he nearly 19 years old they would have to pay min wage and 50% of his training course so they finished him. He did a year with no training, being used to do all the jobs no one else could be bothered with and has walked away with nothing. No qualification to take to another job no proper training, that was the thanks for turning up every day no matter what the weather for £2.60 an hour. Cheshire West & Chester totally used my son for cheap labour and no doubt will do it again.
15/03/13 Hannah
0

Just to add another comment. At £90 a week (apprentice wage) the goverment give your employer a grant and in the end, the employer pays 87p an hour to the apprentice.
This world is free and fair.
04/12/12 mikeh
-6

Your son, much like the rest of us (apprentice joiners/trades men/women) get ripped iff all the time, we are too young to be taken seriously by authority and too poor to take legal action so we just sit back and take the crap - better off on job seekers allowance than slave away for a prick that drives arround in a merc while you have to struggle paying just to get to work, after my weekly costs come out i end up in negative money, so in reply to annalisa: Ask your son "do you realy want to work 45 hours a week and Pay to do it?" even after you finish your traning you cant drop into a proper job as a trained joiner as you havent had the experience to do it, so again your stuck on minimum wage and still not getting anywhere.
04/12/12 Mikeh
-3

I Find your comment to be unfair.I do understand what you are saying about your son.But he is lucky to have a job with this employer.My son has completed his year 2 apprentice level. he passed his NVQ back in June 2011 has'nt been able to find any employer to taken him on to complete his level 3. we have sent out so many letters and failed to get reply's back .feel so frustrated. here we have a young man wanting to complete his last year of his level 3.has ended up at macdonalds on a weekend.thats not what he trained for :(
23/02/12 annalisa
-8

"A handyman by anyone's reckoning is unski11ed work. These rates are 3.5 times minimum wage level [..] A whole army of handymen should descend on London and reduce the costs."

If you feel so exploited, and you feel that the job is so easy, then do it yourself. But no I guess you'll never do that, because you are too important and oh so highly ski11ed you could never stoop to the level of handyman. You just want someone else to do your dirty work for minimum wage. You make me physically sick.

If you can't do a job, then you should pay someone else a fair price to do it. Don't expect work for peanuts because you are too lazy, idle and cheap to do it yourself.
16/02/11 Ignorance is disgusting.
-12

Listen, in the current climate you should just appreciate your son has a job, and a good one at that. Everybody knows the wages are poor but you are not qualified. You are learning, you didnt get paid to go to school so at least he is getting something. I can guarantee if your son leaves this job he will be struggling to find another. People would give an arm and a leg to have an opportunity like that. However if he stays on, grits his teeth and deals with it, in the long run he will most probably lead a succesfull, fulfilled life, with a comfortable trade behind him and a chance to run his own business one day. All in all, stop moaning, deal with it, and just be happy that he has an apprenticeship. I certainly will be happy to take his place if he leaves!

I have just seen an advertisement on the Internet: affordable handyman rates. probably the cheapest handyman service in London 1/2 Day £120 Day £180.

A handyman by anyone's reckoning is unski11ed work. These rates are 3.5 times minimum wage level. Handymen rarely pay VAT for their work, and I expect work in the black economy of paying no income tax or NI. All cash transactions.

A whole army of handymen should descend on London and reduce the costs.
26/12/10 Customers are Exploited
-25

A hundred years ago your parents had to pay the boss to accept their child as an apprentice. Mind you the firm was contracted by this action to teach the child a ski11ed job, and get their ticket.
26/12/10 Pay the Boss
6

I've the same problem with my daughter first step contact ucas and then a solicitor she's now taking her employer to court for her loss of earnings. good luck
05/12/10 Dawn
0

this does undoubtedly happen. espeically with young people on work experience. what sometimes happens is that employers are willing to pay for young people's education in exchange for cheap labour. then what happens is, the young person graduates and the employer puts them on the scrap heap. they then replace the young person with a younger person who has just begun their education payed for by the employer. what you are left with is a large number of young people with the education and experience, however no jobs.
06/11/10 mardi gras the candyman can
-22

My boyfriend first started his job in May 2007 with a local joinery company. When he first started his wages were cash in hand, not through the books or anything. Started college in the August and his wages went through the books, starting getting paid by cheque, wages started around £120 a week for around 40+hours a week. Often working Saturday shifts. He has been made redundant 3 times by the same employer, been to college 3 times, missed one full year, been messed around. Wages went upto £150 a week after he entered his "2nd" year but not officially because he hadn't started college yet again. It took his employer months to finally send him back to college - now it has came to August 2010, he has supposed to be in his third year apprenticeship and should be on much better wages. He was earning around £190 a week -which he has now been told will go down to £175 a week. Why the change all of a sudden? My boyfriend is expected to take his own car to work, pick up other colleagues, drive down south with no expenses or extra wages to see him live easy down there. I keep saying to him to get another job but due to the financial situation that we are in its not as easy as it seems. If things were done properly he should have been almost time served by now instead of entering into his 2nd year at college and on wages like his. He also has no written contract, gets a bawling if he makes a dentist/doctors/hospital appointment, he has no holiday entitlement, no health and safety equipment! I keep saying to him to take him to the pay and work right guys to see what they have to say about this but he thinks it will be a hassle. Is there anything that I can do to help improve this dreadful situation?
14/10/10 Emma
-14

My nephew is staring college in September to do a construction course. In the meantime he has start to work on an "as and when" basis for a local builder. The builder, however seems to be paying him "cash in hand" at a rate of £2.50 an hour (apprentice salary).

He has no contract of employment, let alone an apprenticeship contract. It seems that the employer is simply taking advantage of the fact that he is a college student learning the trade. Essentially this is cheap labour.

This is really dumb because as NLP says, "You are where you want to be in life" - meaning, its up to you to change things. If you son values himself more, then he is in the wrong job or perhaps profession...maybe he should rent a flat for a few months and then go on the dole....everything paid! Rent, Council tax and around £55 a week........
09/05/10 John Malcolm
-7