So Rover has gone to the wall and its all very sad, but the simple fact is that so have many other companies.  Why should they be bailed out when so many others have gone to the wall?  Maybe it's that time for all car manufacturing in this country and by the way, Rover isn't the only car facturer affected by job losses!

Rover Workers are being offered this that and the other.  When my Dad lost his job in the 1990s he was offered nothing.  When I lost my job I had to just sign on and get on with it.  Nobody gave me skills training and nobody helped me fill in the forms.

I have heard quotes such as "I can understand cutting back and my wife can too, but try telling your son you haven't got any chocolate biscuits when he's used to having things there".  You would think this chap's Son was 6 not 16.  I think that its high time this young man got himself a job and didn't rely on his dad earning and supporting him.  By the time I was sixteen I was working! 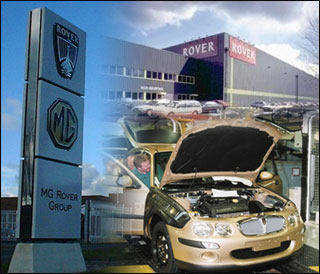 Another quote that just about sums the whole attitude of these people: "My wife asked me what we were doing about money now and I said we'll just take it out of the bank, but she said 'don't forget there's nothing coming in'".

Well have they not heard of 'savings' or putting a little bit of cash by for that rainy day?  Obviously they have not!  Also, you would think that his wife could get a part time job at least.  He would have to take a cut in wages but they could manage.  My mother had to take a job and there was no help for her or my father, sacrifices were made and we got by.  It just makes me mad that people these days expect everything on a plate and will do nothing to help themselves.

There are still some cracking Rover 75s on the road, and will be for some time as they are long-lasting, well-made cars. I know, I worked in a Rover center for a few years so this years favourite is Audi, Volvo was last years was and BMW may be next years. come Easter it will Seat or something gimmicky. All I ever wanted when I was young was a nice car and a motorbike and then as I got older I just liked things like supercars and sets of stamps and fine art. I have never bought in to crazes but can understand with chaps who feel pressured into doing so at any time in their life.
08/06/14 collar
0

Let me make it easy for you Joe, A binner is something referred to in this country as rubbish, Bin-er. Totally wrong cause they are good cars but the drivers are not liked.
14/07/13 Jettyboy
-1

Joe from Splott, I'll tell you anyway, BMW's in the UK are usually refer to as Beemers or Beamers.
Big meaty fingers.... The N is next to the M on keyboards, work it out for yourself.
14/07/13 Jethro
-3

I have owned massive quantities of rovers and MGs over the years, and I can honestly vouchsafe the KV6 series of engines to be the best, in either the 2.0 or 2.5 version. The problem is that the majority of former Rover owners are all old and do not want to drive a German marque. In reply to the original poster, no I do not agree with that, and to the rest, well, I am amazed you have never heard BMW referred to in the affectionate diminutive 'Bimmer'. @Jethro - Pray tell, what is 'big meaty fingers? on second thoughts, I'd rather you didn't tell me.
14/07/13 Joe from Splott
-4

The answer to your question jethro is that the UK government makes loads of money from the "I'm better than you, my car is better than yours," syndrome. Started with council house sales and new front doors, just goes to show how insecure people are these days.
13/07/13 OAP
1

Following on, Why do people buy a 20 grand motor and then stick a 5 grand personalized number plate on them? I would think the sensible thing would be to add this to the cost for a better model. I cannot see how NOB 1 can get you any cred.
13/07/13 Jethro
0

How can anybody who recommends such a thing as a bimmer? expect to be taken seriously?
13/07/13 boblet
-3

I'ts true the Rover 75 was a splendid example of automotive innovation, but rather than bemoan it's loss, why not just buy a 5-series bimmer?
13/07/13 Joe from Splott
-1

I would like to adress my comments to the imbecile who wants his children to eat less choclate and that his wife get apart time job can I tell him .that millions of wives work full time jobs ands that some in this country dont get a biscuit at all and if I was a member of his family it would not be a part time job I would be after it would be a full time seperation
02/06/11 corsir
-6

Evet hear of the European social charter, Thought not. its the reason why european businesses stay in business by looking after their workforce and the reason why multinationals buy up companies in the UK and then close them, its also something our government will not sign up to because big business pays then huge backhanders not to.
Look it up and see what it entails and why the more successful countries have all signed it.
21/04/11 Tinkerman
-4

it annoyed me how everyone kept going on about national pride and the death of the british car industry. indeed, who cares. millions of companies go to the wall with no help from the government. if a company is not managed efficiently then going to the wall is an economic consequence.
06/11/10 mardi gras the candyman can
-15

HEY HEY what do you say

I suppose if you were living your life &weresupportedby rover it would be a different story.I am not living in brum but I don t think all the little suppliers would be agreeing with what you say,,,,
12/09/09 HEY HEY what do you say
-5

Rover went into administration because the little "consortium" who were given about 100 million by the government are now suddenly millions richer because they took the money and ran.

Our government are incompetent as if they had a use these people would be in jail and decent people would have jobs.

The management were at fault, and the government didn't hold them to account. Another example of greedy men winning, the good guy losing.
24/05/07 Nick
-10