I went out to a few pubs at the weekend and it's the first time I've gone to one other than my local which happens to be a J D Wetherspoon pub.  Obviously they don't get much cheaper than that, but I was absolutely shocked at the beer prices in these other pubs.

There were three of us out together and as you do we were buying our drinks in rounds.  The average cost of three drinks on a trip to the bar was between 9 and 10.  Each drink was over 3 with the most expensive being closer to 3.50!  The evening before it was just the two of us and we were in a different town.  Again, we were paying around 3.25 for a pint.  Admittedly it was my favourite beer which I haven't seen at a pump for quite some time and my fondness for this tipple somewhat softened the blow.

So generally over 3 for a pint of beer.  How did it get so expensive so quickly?  I can remember paying 2.50 not so long ago in one of these other pubs and thinking that it was a bit steep.  Why don't they just call it a fiver and be done with it!

During the evening I made some comments about the price of a round whilst chatting to our friends and people generally shrugged their shoulders and had the attitude of, 'well that's what it costs now'.  Fair enough for them because they're all earning a lot more than me.  I'm not generally tight with money, but I have to look after the pennies and I begrudge paying steep prices when there's no tangible benefit.  Although I suppose one could argue that it was a rare opportunity to meet up and socialise with friends, so just accept it and move on. 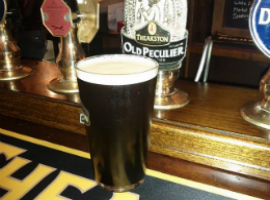 Whilst I can appreciate that we have inflation and all the price hikes that are related to the recession and our current economic position, I can't get my head around the fact that some places are very expensive and others not so much.  Location makes a difference and you pay more in the city.  Our local for example sells one of the cheaper, but still quite good beers for 1.50 a pint and even the premium ales and ciders are between 2.30 and 2.40.  This is a far cry from 3.50!

Personally, I think that people are too complacent these days and I'm not just talking about pub prices.  They just put their hand in their pocket and just pay whatever they are asked without complaining.  There are genuine costs that rise and there is also genuine greed where prices are put up to make more profit.  What do you think?  Being priced out of a trip to the pub and staying at home a bit more?

There's no need to mention the past really. Due to inflation prices WILL go up or alternatively, sizes will go down. Unfortunately for drinks it's difficult for the sizes to go down because a pint is a pint so prices need to go up, inevitably - unless the beer has been WATERED down! LOL
30/05/13 Andy
3

I don't even live in London but nearby and the prices in our wetherspoons are enough as it is.
I like guinness which never seems to be on a cheaper offer unlike the lagers and its usual price is £3.20 a pint. There's a monday club of about 50p off most beers but if you work mon-fri thats no good to you.
The other local pubs are anything up to 3.80. Its criminal and no wonder I buy a pack of 4 cans for £4.50 at my local Iceland. I simply go looking for supermarket offers for crates of 10, 12, 15 etc.
25/05/13 ahforfoulkessake
1

Come on mate? Give us a proper handle. Don’t be ashamed of your pervy feelings, it is sad but it is how you are (Bent), you don’t have to hide behind others people’s names. I understand.
25/08/11 Boblet
-6

mikep. Kenny has stated his position on numerous occasions with regards to his limited time. Your problems are self-inflicted. Being an attention seeker of considerable proportions maybe it is time for suckling?
25/08/11 Boblet
-3

This forum needs more frequent moderation to remove illegitimate, obscene, derogatory, and spoofed comments such as these :

When are the promised secured log-ins coming?

I have no problem whatseover with any of you criticising me as vociferously as you like, nor expressing the fact that you hate me, in any terms you wish. It's all water off a duck's back.

Some of you need to grow up and get a pair of balls and post in your own names rather than pretending to be me.

MikeP-No,I was playing pocket billiards at the time.It just would'nt happen on the continent.Or maybe you already have experience of good etiquette having sampled the delights of the excellent French bars & restaurants where dogs,children,& hats are the accepted norm.
22/08/11 Robin Bastard
-8

RB you said hat, not cap. why did you not say cap in the first place? different people different post we all draw a conclusion. sorry mate.
21/08/11 Boblet
5

Its a good job Pubs dont fling people out for entering them with they're head up their own @rse if they did Mike P would be banned from every Pub in the country.
21/08/11 Izzle
17

Boblet-No it was a baseball cap.I'm a respectable fifty something not a hoodie or a chav.So good riddance,they won't be getting my custom again.
21/08/11 Robin Bastard
14

Thanks for the backhanded compliment Freddie, the WG is what it is, I accept it in its entirety. I also admit to being northern. I asked admin once whether he could introduce smiley or sad faces. They may help folk better understand my questionable sense of humour. Taking the piss is my way. I got some hidings at school but I still laughed the masters used to get madder & madder. I realise that getting Fred D/Percy S mad is cruel on my part. I much prefer to do it to people with a bit of lead in their pencil.
18/08/11 Boblet
-11