When you are in a restaurant and you order a bottle of wine to go with you're meal, if you are looking economise a bit you might choose the house wine over a more popular label.  Well at least that's the way it usually works because restaurants buy it in large quantities and it often doesn't have the same mark up as the branded stuff.  So why isn't it the same with the house Vodka in JD Wetherspoon pubs?

Like most people, when I go up to a bar to order these I just ask for a Vodka...

I recently went out for a few drinks with my girlfriend and a friend at The Standing Order pub in George Street, Edinburgh.  It's a great pub with a fine selection of ales (my favourite tipple), however both the ladies opted to have a Vodka and a mixer.  Like most people, when I go up to a bar to order these I just ask for a Vodka and (whatever) presuming that it's going to be Smirnoff or some other well known brand.  I know that lots of pubs sell a house variety which is usually cheaper, and to be honest I don't think most people that like the stuff are that bothered what it is because it's usually mixed with something. 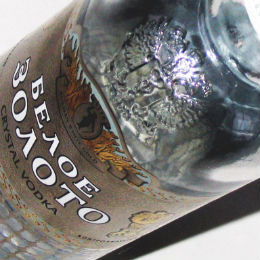 I didn't pay much attention, but my girlfriend standing next to me was much more observant and noticed that the till said "Finlandia" when the bar person rung up the drinks.  She only mentioned it in passing because we both think Wetherspoon pubs are pretty good value for money; we assumed that if the bar staff had chosen a house Vodka over Smirnoff then it was probably going to work out cheaper.

We decided to stay for one more drink before going off somewhere else to have a meal.  For the second drink my girlfriend noticed that she was served a brand called Skyy which was drawn from some large attractive blue bottles behind the bar.  When we returned to the Wetherspoon pub after our meal my partner asked for Vodka and a mixer again, but this time she asked "Do you have any Smirnoff?" "Yes" she was told, "But we normally don't serve that unless it is asked for by name."

One of the things I love about my other half is that she's one for looking after the pennies and she'll absolutely not pay more than she has to for things.  "Which is the cheaper Vodka, those house brands or the Smirnoff?" she asked the lady behind the bar.  "The Smirnoff is cheaper" came back the reply.

Naturally she went for the Smirnoff which was actually 25p cheaper than the house Vodka that they were pushing.  This means that our earlier visit cost us 1 more than it could have done.  I know that a pound isn't a vast fortune, but in this case I'd rather that it was in my pocket instead of in their till.

I really like this vodka and There aren't that many ghastly wines on the market these days. You get the odd cheap bottle that has a taste of turps but the majority are sound. If you want to pay £1 for 8 litres of El Cheapo table wine then you know what to expect.
best decanter whiskey
05/02/19 Vodka
0

Smirnoff is the house vodka, the other vodkas are the guest vodkas they they want to sell more of to boost overall day income and often come with incentives if they sell a lot
17/11/11 DDDave
-7

Oh I see. I tend to find it much easier to 'pitch' my language to the audience, so to speak, based upon years as a teacher trying to make abstract philosophical concepts comprehensible to young people (from 16 years old when I do school and college visits, to around 23 years old), voluntary work working in hostels in which my language has to come 'right down' to a certain level when I'm handing out sandwiches, hot tea and giving some basic counselling about drug and alcohol abuse. Most of my fellow academics I know seem to find it relatively easy to 'switch-off' from the language of the lecture hall, to the easy, conversational language of the staffroom and pub. Odd that!
18/05/11 miserablemoaninggit
-15

Sam the Tiger. I am not, indeed, sure whether it is not true to say that the Milton who once seemed not unlike a seventeenth-century Shelley had not become, out of an experience ever more bitter in each year, more alien [sic] to the founder of that Jesuit sect which nothing could induce him to tolerate.
16/05/11 Boblet
-16

Au contraire. Native to the “manor” born, honored perhaps in its breach than its observance, I presume we move in different literary circles. As to your pain, I’ve been there.

My signature style is heavily subverted by involvements in academia and teaching of EngLit and Law, conditioned by the despised conventions of academic writing that inflict “existential trauma.” You're not alone in your dilemma.

'If openness means to go with the flow,' it is necessarily an accommodation to the present. That present is so closed to doubt about so many things impeding the progress of its principles that unqualified openness to it would mean forgetting the despised alternatives to it, knowledge of which makes us aware of what is doubtful in it.'

Few readers can claim to comprehend his lamentation over the failings of today's students, a call to arms to return to tradition and standards in education? Allan Bloom was a stellar scholar who “wanted liberal education to resist what is most powerful and the worship of vulgar success" and advocated openness to mean “closedness to all the charms that make us comfortable with the present.”

Abhorring anti-intellectualism, demeaning “professors whose attempts to influence end up in the power of the would-be influenced,” he didn’t think usurping Media and Business departments should be charged with the responsibility of teaching and condoning “Computer English.”

His literary soul-mate is William Blake who, when complained by Dr Tusler that Blake’s work was getting more more difficult to understand, the response was scathing. No details for fear of being misinterpreted.

If ever I needed a worthy foil to cross swords with over the relativism of good-bad scholarly exposition, legions exist. I thought I had already held down my approach below the limits of abnormal academic conventions; but I may be wrong. I apologize.
16/05/11 Sam, the Tiger
-13

Hi Sam the Tiger, I take it that English is not your 'first' language? Or, am I wrong? No offense, but I find almost all of your posts 'painful' to read, and I'm supposed to be a fairly intelligent bloke. When I read the usual academic texts that I'm required to read, I go into that 'mode' of reading, so to speak. Anyway, I think I agree with everything you say, and I echo your question in relation to other liquor (spirits) products.
14/05/11 miserablemoaninggit
-4

A market paradox, I'd suggest. A known fact of special items for special taste buds is what tips the inelasticity of demand schedule which theorizes that anything expensive does not necessarily deter its purchase. The nature of the consumer psychology that conditions his strange covert behavior (thinking) triggers his difficult-to-fathom-and-predict buying habits, such as heading for the most expensive.

Your girl friend happens to fall within the category of those who exercise more common sense than her opposites who equate price with quality and status.

I happened to have been informed that house branding is pervasive in your country and that your supermarts are sophisticated purveyors of house wines for generating and maintaining their unique standing and pricing practices. Is this true then that the in-store brands are generally more expensive than branded wines even in a supermarket?

Also, from the supplier's standpoint, it appears that if oversupplies occurring in the normal distribution channel caused by institutionalized branding-down to house brands or branding-up for obvious reasons that could not be fully absorbed, it'd have the effect of overspilling the product lines (second brand concept) into bars and restaurants while perpetuating their uniqueness.

Can not the same argument be applied to other forms of liquor product too, as in the case of your house Vodka? I'm trying to make sense of the question raised that defies logic, despite its truth.

Kirsty the most expensive item does not always carry the biggest profit. A penny sweet for instance carries a massive profit. The house spirit in Northern pubs I have visited to get plastered as cheaply as possible is always the cheapest. The house spirit by definition is the cheapest or they are using the term to kid people
13/05/11 Boblet
-6

Look, they're there to make a profit so of course they're going to sell you the most expensive drink unless you ask specifically for a brand. It's common sense really. People these days expect something for nothing. Stop moaning and get a life!
13/05/11 Kirsty
-20