This gripe is probably going to annoy every second person that reads it, but I don't care because I think this is something that needs to be said.

I'm willing to bet that, like me, a lot of you men have gone to a pub or club with a group of both male and female friends and discovered that, whilst men in general understand the British social custom of buying drinks in rounds, most women seem to have failed to grasp how it works. Either this, or they think that they are exempt from it for some reason or other.  Why do so few women get the drinks in when it should be their turn?

I know what you are thinking. 'Don't be so tight', and whatever happened to good old- fashioned chivalry?  Well, my answer is simple.  You can't have equality in only the areas that suit you; it has to be across the board and that includes paying your way in the pub! 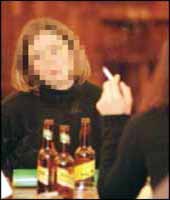 ... buying drinks for just herself

An observation that has also been made, and thinking back on a number of occasions it is definitely true, is that when you see a woman at a bar she's usually buying drinks for just herself or for her girlfriend(s).  If there is a man in the group guess who gets the honour of going to the bar and buying all the drinks for the evening?  Let me give you a clue, it won't be the girls, well at least not as often anyway!

However, as my friends and I have discovered after discussing this over a few beers one night, they're not all wallet leeches!  It seems that we all know at least one woman each that gets her round in, and quite often she'll be the first one to the bar.  She will never need reminding that her turn has come and really should be treasured as one of the lads.

I was at a speed dating event and met an attractive girl and we hit it off together. And she was into me as I was her. During the evening I bought her 5 drinks in a row (in an expensive joint), and not once did she offer to buy one. I never bothered contacting the selfish woman again
24/01/21 Andy
5

What annoys me more is rounds of drinks with friends where there are couples and some single people. For some reason, the couples buy one round and the single people buy one round. Again, you are right, the women in the couples dont go and get a round in. Single people lose out so much. Ps. I'm a woman and I always get my share, and more, of rounds in!!
23/04/20 SR Bubbly
1

It’s not that they won’t buy a round with the guys, when they’re out together, lets say 5 women are out for a couple of drinks, when it comes time to settle up, out come the 5 credit. Credit cards with the cry, can you split it 5 ways, so much hassle sad And the bartenders on Guys almost NEVER do this, jumping over one another to pay for the round.
I can’t figure it, when sisters are looking out for each other and we can do anything men can, please get a buddy system ASAP.
19/04/19 Out for Stout.
1

Im guessing they just don't feel it's lady like to buy a round of drinks for men. They dont want to feel like 'one of the lads' and therefore wait for you to offer to buy a drink. I'm a lady and no matter who I'm with, even on a date, I would offer to buy the drinks but that's because I feel weird when other people pay for me.,
09/06/14 Lady drink-buyer
1

MSG You presume to much I have not said any of these things other than I go out. The fact that it broadens my horizons is a bonus. As it happens I am an alcoholic, with a bad temper, people tend to avoid me.
09/03/11 Boblet
-5

I am a woman and I always get my round in. Always. It's not a matter of gender, really. I don't understand the mentality of anyone, male or female, who will stand there accepting drinks off everyone else all night and then shirk their round by going home or suddenly saying they're skint. Or orders expensive drinks when it's someone else's round, but won't return the favour. If you don't want to get in a round, say so when you first arrive. No-one will be offended!
09/03/11 respectful drinker
-12

I am going out tonight to the Ring O Bells. The barmaid is good fun, the manager hasn't paid the gas bill so the heating is by wood burning stove. My mate John & I will play Paddy & John2 at fives & threes.
I am posting this in case anything a bit controversial lands whilst I am out in the village world. Touching smelling & listening to real people.
22/02/11 Boblet
-9

The answer is for women NOT to be allowed in bars!

My favourite bar was men only unless the fire was alight.

Then everything changed in 1972!