Well not quite, but going back to that old gripe about women who won't get a round in, some people it would seem are quite happy for you to carry on buying them drinks all night without ever putting their hands in their pockets.  For example, I am usually on my own when I attend family gatherings such as weddings and birthdays etc. I will therefore quite often share a table with my brothers, their partners and their children.

The group can consist of about ten people and from that ten, the three women do not ever buy a round of drinks because of some archaic idea that women don’t buy rounds of drinks.

This idea extends to their sons and daughters who are a bit older and in their twenties now.  Of course because the parents have always supported them financially, they assume that they will also be covered when out socializing at occasions such as this! 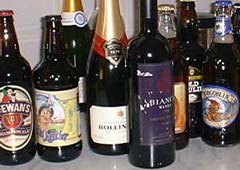 The drinks bill for the evening therefore usually falls on the shoulders of myself and my three brothers.  This can be an expensive evening for me as a single person and I feel that I am subsidizing the drinking habits of the entire family.

I don't think that this is very fair really and it would be nice if everyone at the table made an effort to go to the bar and buy a round of drinks.  Should I mention them how I feel about the situation or should I remain the mug who's just there to get the beers in for everyone?

you know how much you're likely to drink and if you'll eat on the way home so only bring enough for that and leave wallet and bank card indoors before you go out.
They'll soon get the mesaage 2nd or 3rd time you do it.
Hope that helps.
25/05/13 ahforfoulkessake
0

The post by Chad is spot on. Everyone needs to be more hard headed when it comes to this. I had a colleague who would regularly ask me if I wanted to go for a drink after work. I paid pretty much everytime (there were only one or two exceptions), as well as lending them money which I never got back. If it happens once it will happen all the time.
31/10/09 Howsoonisnow
-2

Why don't you just have a quiet word with the two other guys who end up paying for drinks too and tell them you can't afford to do it after all if you are single it's their partners and children you are buying drinks for. I agree it's not fair especially if the people concerned are 18+ and drinking alcohol - they should all pay their own way, a kitty is a great idea!
22/07/09 Al
-5

Don't drink! That will take care of the whole thing. When someone asks you why then tell them! Your money is your money and noone made you buy anything for anyone. The lubed you are the more free you are buying drinks. I just hope that NO ONE is driving after ward!
If you think about it If you drink any aren't you drunk? Not the same as you were before drinking.
IE: If it takes 6 cans to get you drunk and you decide to drink only one aren't you 1/6th drunk?
I guess I am a bit slighted anyway! My Aunt was killed by a man whom had only half a glass of beer. He was actually drunk, weaving and everything. Her friend had some scratches. I have 3 children. My heart just dies when they get hurt let alone the stitches and staples we have already went through. I would have to be strapped to the floor in a rubber room if some idiot that was buzzed (by drinking or some other means) or drunk hit and killed one of my children!
I wonder how much that beer is worth then?
09/08/08 shells
-3

I have recently come to the reality that money can't buy love... I am not rich but like seeing my friends happy when out with me. Some of them don't have the money so I take care of the tab. I realize that true friends are friends that don't care what you have. If you are that guy, like I was, who wasted countless dollars on pleasing the crowd then I understand your pain. Don't over indulge yourself so many times that it leaves you alone with nothing to show for. I have chosen to keep a penny in my pocket for everytime I go out now to remind me of whats more important these days....and that is taking care of #1.
06/06/08 Chad
-15

L is for Lager

If everyone is drinking, then everyone should pay, women and young people included. The only exceptions I can think of would be if someone is currently out of work, at college or uni or a stay at home mum - and as long as everyone is happy to subsidise them.
Just buy your own in future, and let the others support themselves.
21/01/08 L is for Lager
-4

SIMPLE. Don't do rounds and everyone buys their own drinks. I find that's the best way if you don't want to end up buying for the ones who plead ignorant or 'nip to the loo' when it's their round.
01/01/08 Lisa
-7

It's a small feline (tabby cat I think) found in some of the more exclusive clubs and pubs. The drinks kitty is small and nimble, therefore able to get under the tables and between legs. It will go round everyone and collect their money in a little pouch around its neck. There's also a little scroll with a note of what everyone is drinking. The drinks kitty will scuttle off to the bar with the money, order the drinks and bring back the change. Some places even have a dog that brings the drinks back to the table. Hope this helps
30/10/07 Mustafa Larf
-4

Wandered by here completely accidentally while trying to find websites for bars that woulde give me a free drink today (it's my birthday!)

I've never heard of the concept of a 'drinks kitty'. Can someone enlighten me further?

Drinks kitty is a great idea. My advice would be to talk to your brothers and explain the issue. If they understand, then great - next time everyone will chip in, or it will be proportionate. If not, then next time the occasion arises, simply don't offer to buy a round or 'chip in' - this will also mean refusing if one of them offers you a drink, so it's a bit anti-social, but you'll probably find you only have to do it once to make the point!!
14/05/07 Devon girl
5

I agree, they should go dutch, and not expect freebies all night.

Same as opening doors, or giving up seats, ( I only do this for pregnant women) they arn't SUPERIOR to us are they.?

Simple solution to this one. Just tell them that you are going dutch tonight as you are a bit strapped for cash.
18/04/07 Freddie
-3

Short change by bar staff buying a round of drinks