Here's a gripe that may be a familiar subject to those paying attention to the news these days.  No more cheap beer at supermarkets because the government want to impose a minimum price for alcohol.

Cameron has hardly been in power ten minutes and he has started on the cheap beer in supermarkets being the root of all evil.  I'm sorry, but I am pretty certain there are much more important issues that need to be tackled first by our new government.

When it's really cheap I stock up for months, I only drink a couple of cans a night, but I am classed as an alcholic and binge drinker and must be controlled.  Are they basically saying I am going to go out and start fights because the drink I bought was cheap?

Don't they realise that a fair number of people in this country can't afford to go out to pubs now because of the high taxation that has been imposed on us?  The pubs are mostly empty and closing down at an alarming rate as it is.  If the minimum price on alcohol policy is brougt in then only the well off will be able to have a drink and the UK breweries will soon start to feel the effect as well.  They will no doubt follow the pubs and start closing.  So much for supporting British industries! 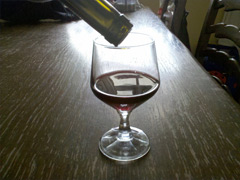 If they really want to clamp down on drink related violence, then they ought to start on the ones causing trouble, not penalising family men having a few cans of beer on the patio at night.  It's basically like using a sledgehammer to crack a nut!

Using their logic, they should be putting up petrol because people die in car accidents, or taxing chip and kebab shops because people are getting fat and unhealthy.

They will no doubt implement this minimum alcohol pricing policy and the real reason is more tax, presumably so more wasterers can sit behind desks.

Well they won't beat me, I shall buy mine in France in bulk from now on!

If you're that poor that you have to buy your alcohol at a price below the 50p/unit or whatever the threshold is, then you shouldn't be buying alcohol. full stop. very few of the products in supermarkets fall below this minimum price. get your facts right before you start your lefty rants
04/04/14 ben
0

Looking, A horrible picture that you are advocating, but i think in the long term, correct. People are living in the Here and Now, and don't care about the future, greed has taken over, we are all becoming to a degree, conscienceless. There are those fighting to put things right, but if things continue the way they are going?????
17/09/13 Jethro
11

Looking at the big picture

Booze is just another of the many, many tools that mother nature uses to control the level of population on this planet. Drink too much alcohol, and you die sooner than you should. And just when the human race think they are winning against her, she throws in a biggy just to put us all back in our place. And at this moment, the human race is testing her patience to the limit.
17/09/13 Looking at the big picture
8

The problem one of the pub landladies in my local area said in an interview to the local paper is people pre-loading before they go out to the pub at weekends.
They don't buy that many drinks in the pub as they've had a few. Which is less revenue for the pub and less tax to the government who put the duty up year on year.
Supermarkets can afford to sell alcohol as a loss leader to get people in to buy other stuff as well.
I like a sociable drink in town but won't go very often on Friday and Saturday nights as the idiots you get on a night out do my head in and I can't afford it very often so I buy cans to drink at home.
02/06/13 ahforfoulkessake
1

It's time to drive up pub beer prices not supermarket prices. At the end of the day it is those who have had too mach to drink at a pub who start fights and call the police/ambulance. NHS is also struggling to deal with so many drink related diseases and liver transplant requests.
30/05/13 Nick
-2

I think that gainsborough lad is spot on.
Why should people who have to stick to a "we're all in this together" budget weekly/monthly have to pay through the nose for beers as the pubs keep putting prices up to cover tax hikes?
I buy a few cans occasionally to sit indoors with. Im not burderning the police or ambulance services by getting drunk in town and casuing fights or unable to get home.
Now it seems that an innocent pleasure like that is being eroded. And you thought cromwell was dead.
25/05/13 ahforfoulkessake
2

I dont think that they can stop alcohol miss use,those who like it will still find money to do it,and what is it to do with you anyway,as far as raising tax from alcohol is concerned I think there should be a pin stripe suit and cotton collared shirt tax,having some booze every now and then is ok
01/11/12 rc
0

As a tax payer, your job is to do as you are told. Basically, you are so weak you have no alternative other than to sit and suck on it.

Unless you have balls of steel and be prepared to stand up against their decisions. Get back in your box, save your tears for your evening meal and stop whining about it all.

Taxes are imposed every way possible to fund overseas ventures. Afghanistan is costing the tax payer an absolute fortune on a daily basis.

They are very deceiptful on how costs for this campaign are hidden from the general public.
23/03/12 Davey Boy
6

I enjoy a few glasses of wine, but I do believe we should curb alcohol abuse, under age drinking and the promotion of 'cheap' alcohol, and this can be done without there being a minimum price for alcohol.

1) limit the number of alcohol licences granted to outlets. I have always been baffled by 'small' corner shops that find the space (normally one shelf in a fridge) to sell alcohol. These outlets are 'probably' responsible for selling alcohol to minors;

2) advertising of alcohol should be banned from media, for example, television, radio, newspapers and the internet. Advertising of special offers should be limited to inside the outlet only, for example, supermarkets, and the promotion should be in the aisle displaying the alcohol items only. Alcohol should also be displayed at the 'back of store'. (I am not against special offers on alcohol, providing the outlet is responsible);

3) off licenses and public houses should be the only outlets allowed to sell high content alcohol, for example, 40% and above;

4) 'happy hour' should be held between Mon and Thur only.

Most of the city centre trouble is caused by young, single drinkers who can probably afford it even if the prices are raised. It is sensible people who have a beer in the evening at home or share a bottle of wine with friends and family who will no longer be able to afford it if supermarkets are forced to raise prices.

Discounted booze is the scurge of Britain. Week after week I open the local paper and read about the carnage caused by drink fuelled Chavs running rampage in the city centre. Until an alternative (public thrashing?) is found I think the only sensible way to control Chav consumption is through pricing. The rest of us "honest" plonkies will have to pay the higher prices too.
08/01/11 Miser Jock
-7

Chalkie, I certainly wouldn't be buying an ignorant, arrogant fool like you a drink any time soon although I wouldn't need a drink to get violent and give you a slap.
08/01/11 Miser Jock
-6

The only reason to stop supermarkets offering good value alcohol is to increase taxes and duties which are calculated as a percentage of the retail price.
IF anyone wanted to reduce the nuisance that drunks cause then deal with them directly. A return to old style pub hours would help perhaps with on the spot fines for licencees selling to drunks.
14/10/10 Marsh
-15