Its nice to go out for an evening meal and a nice pint occasionally.  The local Hungry Horse or sometimes the JD Weatherspoon pub in the town centre would normally be the venue of choice, mainly because they are a known quantity.  With a decent range of beers and pretty good food at a reasonable price you cant really go wrong; by the way, this is not an advert for either of the above chains!

We were out visiting family one afternoon when the pang for pub grub and a decent pint kicked in, but alas the Hungry Horse was full to capacity and not being capable of waiting for a whole hour we decided to try the Brewers Fayre place up the road.  I have vague memories of having been in one of these before and the food was okay.

Whilst it wasnt a meal to write home about last time, it was acceptable.  I really cant say the same about this visit to a Brewers Fayre pub though and the only reason I cleaned my plate was because I was absolutely famished!

There were six of us on this occasion, four adults and two children.  It has to be said that the Brewers Fayre is good for kids, because they sometimes have quite cool play areas for them; keeps them amused whilst the adults get on with ordering food etc. Also, I dont think I can fault how quick the service was as our meal was brought to us in around 20 minutes. 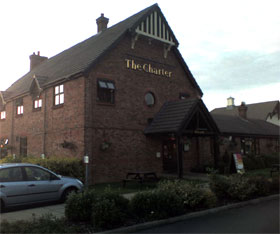 Brewers Fayre are just a little bit more expensive than the other places we go to, so naturally we expected the quality of the meal to be a little bit better as well.  How wrong was that assumption?

I ordered a 10oz Rump Steak with chips, peas and mushrooms.  All was well except for the steak which looked like at least 5oz had gone missing between the kitchens and our table; maybe the waiter was a bit hungry that day who knows?

Also, I had ordered it cooked medium-rare, so I would have expected a fair amount of pink on the meat.  However, there was very little pink anywhere and if I had been asked, I would have said it was definitely a medium, possibly medium to well done.

One of the kids had a combo platter thing which had a bit of everything on it including some carrots.  Oh, by the way they forgot to put the tomatoes on which should have come with the dish and had to be reminded.  Anyway, the little girl in question is a bit of a rarity because she normally eats all her vegetables without being prompted.  She is a slow eater and can be picky sometimes, but vegetables arent a problem so we were surprised when she refused to eat the carrots.  Her mum tried a couple of them to see what the problem was and pulled a face of disgust.  Apparently they tasted as though they had been boiled in the dishwasher or something.  They definitely didnt taste like lovely healthy carrots.

Out of six meals costing somewhere around fifty pounds, I think only two of our party actually found their meals acceptable.  This isnt exactly an overwhelming vote of confidence in my opinion, so I seriously doubt that we will ever go back to another Brewers Fayre and definitely not this particular one!

Oh, and one last thing.  How can this chain of pubs get away with being called Brewers Fayre?  Surely that implies that there may be some connection with brewing and maybe a few real ales?  Ive been to two Brewers Fayre pubs now and havent found anything other than the usual piped garbage and certainly no proper beer.  Sorry, we dont really count John Smiths and Boddingtons as proper beer!

If only the above wasn't true!

But unfortunately it is, and to a far worse state than an undersized stake.

Staff complacency is so rife, that actions are taken that endanger customers.

Even HSE and Fire Service Brigades warnings are ignored.

Outer doors are locked, while customers are inside.

Is this the way to promote a business's operation?

You may well agree that it's not.

Why? It boils down to just two elements. The first is extremely poor management and leadership, and secondarily allowing unqualified horses tail to control the cart!
31/03/19 ChrisCarling
0

More to life than moaning!

Our local Brewers Fayre in Redditch is spot on. Service, food etc. If you want more up market food then go to a more up market restaurant!!
04/04/13 More to life than moaning!
-6

On a visit to Bankfoot Brewers Fayre in Glenrothes I ordered the grilled chicken and bacon salad. When it arrived, the bacon was cold and had been nowhere near a grill for at least an hour or so. The chicken wasn't grilled, it was simply chicken breast cut into strips and also cold. When I complained, they left me with the cold bacon and chicken and eventually brought two slices of bacon that had been hurriedly cooked and had a dirty greasy look about it. I wiped it clean with my napkin and ate it as I was very hungry. I have to say the salad was delicious, but that doesn't say a lot about the cook. The service leaves a lot to be desired and it does appear that the staff consist of a lot of youngsters without a figurehead who would make sure that service was being carried out properly. Not to slag Brewers Fayre off completely, we go to a Brewers Fayre outlet near Dunfermline on a regular basis and are always completely satisfied with the service and the quality of the food there. The play area for kids in Dunfermline is also monitored by a member of staff, whereas in Glenrothes this is not the case. No-one seems remotely interested in what the kids are getting up to and in some cases this includes the parents.
30/01/13 Disappointed diner.
0

Jennifer, I know that you're trying to communicate with us, but do you think you could try a little bit harder so we can all understand you without getting a headache?
14/06/11 AOD
-2

my husband and I and 2 grandkids were at brewers fayre at carrickfergus and I orderd r meals whan the came it was cold and we had nothin 2 eat it with they took meals bk I didin want any think else as I just wanted out of the place, my husband got sunday dinner that my grankids would eat it and want more,, than drunk man goin on and on, I eat there 2 3 times a week, and its lovely I dont no want happin on sunday,,
13/06/11 jennifer davies
11

I ordered a mushroom tagliatelli from a Brewers Fayre some time ago (a few years now) and when it arrived it was in a bowl, watery and tasted like cheap pasta covered with mushroom soup made from a powder. I refused to eat it or pay for it. I have never been back. Service was slow and pathetic. They could not have cared less.
31/10/10 ajp
-7

Last night we visited Brewers Fayre at Fraddon Cornwall. This is the nearest one to us and is a round trip of approx 60 miles or half an hour to get there. On arrival we were told we could not use our voucher that infact runs out on 12th July as they had been told by head office the offer had finished as they had run out of wine. The same thing happened at Table Table but they apologised and said we had to have a different one.Which in fact was better We were very happy. Why could Penhale Round not do this. They said we could have the special menu because that was all they could offer. I said well that means we can not have a bottle of reasonable wine if it has all gone.She then said they had some but that was different not on the offer!!!!

Nothing else was offered so we walked out. I did not like their attitude and they should have offered some sort of drink not just say it is finished. We are most disappointed as we often use this place when travelling to Truro and especially like their Gammon and Smothered Chicken. Making the specail trip for a special treat and then to get that treatment doesn't give good customer relations. Boemin is closer to us so we shall revert to using Wetherspoons where they appreciate our cuetom and would never do this. I think you should look into this complaint because what is the use of putting offers on to encouraging custom and then loosing business through it
12/07/10 Jenny
-9

Just eaten at the Brewers Fayre Pub, The Lock Keeper at Chesterfield.
The wife was presented with a half- chicken meal but the chicken was cold. This was returned but the replacement was also cold. We got our money back (for this meal only) but my wife left the establishment still hungry. We will not be returning to this Brewers Fayre pub or any other in the future.
31/05/10 JJ
4

PS-Sorry for the previous spelling mistake.This is typical of the could'nt care less attitude of these establishments.
27/01/10 Clarnicomintcream
-24

Mad Max-Well done for standing up for your rights.Send the food back and complain.Unfortunately,this is typical of rip-off Britain.This is the typical of the could'nt care less attitude of these establishments.They take advantage of the British complacency in the fact that we as a nation just tend to put up with it and not complain.Bland food,lousy service,and overpriced measly portions.If more people complained in this country then these greasy spoons and rip off restaurants will soon lose buisness.Don't put up with it!
27/01/10 Clarnicomintcream
18

The Brewers Fayre restaurants are the crappest I have ever been in. The sooner they implement the replacement of these places with the Taybarns All-You-Can-Eat Restaurants the better!!!

Taybarns offers vastly better quality food and you can see it being prepared in front of you by the chefs so you know it is fresh. Also it is much better value- £8.99 getting you unlimited helpings of whatever food you wish for.

My family and I made the terrible mistake to eat at the Brewers Fayre- (papermill high wycombe)Our starter although nothing special, was nothing to complain about, however the main was disgusting! Roast Beef dinner for 4. Meal served late, on hot plates ranged from either luke warm or cold. They gave us another dinner in replacement, but replaced it with the medium meal (we paid for extra large) my daughter had one peice of meat on her plate. The second time around the food was luke warm! As for the meat it was full of veins and grissle, and tasted foul like 'off fish' It looked like it had tumours attached to it. My daughter and my father were retching! Everything else was frozed food of what was in my opinion poor quality. We complained and got 3 of the roast dinners refunded. However, we still had an 'after taste' of the foul meat (that we were told was prime meat) in our mouths the very next day. Absoloutly- disgusting!
26/01/10 Mad Max
25

We went to the Brewers Fayre at the Portway Inn Andover on Sun 16 Aug. We have been a number of times before and been quite pleased. Today,however, was dreadful. We had the Sunday roast beef. The beef was tough and quite inedible, The 3 pieces of carrot were uncooked, there was just one third of a cabbage leaf and 4 small pieces of bean. The spuds and yorkshire pudding were OK.
We will not go again.
16/08/09 JR Calder
-5