At almost every restaurant, one thing you can expect is for the waitress to ask if you want a smoking or non-smoking table.  It's an elementary question, but it is one that shouldn't need to be asked.  This simple question may seem normal, but smoking in public places is a health and safety hazard and should not be allowed.

Smoking is an extremely unhealthy habit.  Burning just one cigarette releases over 4,000 chemicals into the air.  This smoke can trigger some asthma attacks, and who would like 4,000 pollutants clogging their lungs?

Spending one hour with a smoker is the equivalent of smoking four cigarettes.  This recycled smoking, or second hand smoke, can endanger the health of others, especially those that are very old or very young.  If every public place allowed smoking, that would be like smoking wherever you go.  There are no laws about smoking while driving, but it is a hazard that should be looked into. Cigarette smoke contains a chemical called carbon monoxide, which, when taken in excess, can cause the smoker to feel dizzy and off balance.  How can this be called safe driving?  Many smokers, when smoking in a car, will throw cigarette butts out the window instead of waiting and throwing them away.  This is nothing short of being a litterbug. 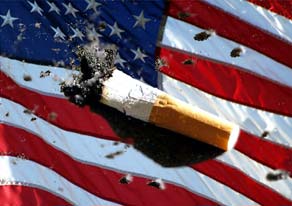 Smoking is a danger to the environment.  Cigarette smoke pollutes the air, and adds to our acid rain problem.  Cigarette filters are non-biodegradable, which means they will not decompose. These filters could be choked on by animals and small children, and no one wants to clean up after those who don't clean up after themselves.

Some countries have banned smoking in public places, but America has yet to follow suit.  Even some of the most family oriented restaurants allow smoking.  The people eating at these restaurants could include babies, senior citizens, people with asthma, and those who in general would prefer not to be around smoke.  If they were really family restaurants, smoking would not be allowed.

Typical.The anti-smoking brigade is not happy with banning smoking here,so now they want to ban it in America as well.Where next? Brazil? Ukraine? Kazakstan? Or...Australia?
17/12/10 DSG
-27

Wrong. You make lots of wild accusations and allegations but cite no real science to back them up. That's because there is none. You simply are a stooge for the prohibitionists.
16/10/10 Tony T.
-26

The WHO shows the same attitude as the supporters of man made climate change and speed cameras; if the science proves you wrong, just ignore it.
14/10/10 grumpyoldwoman
-15

I read some of the comments saying cars pollute the air more than smokers but smokers pollute the air worse than old desiel trucks, and now with all these fancy new cars that have such a small emission, why would they say no driving before no smoking. To go with that what positive affect does smoking really have, lung cancer, gross teeth, rank smell. Well... Okay if that's what your into, but I personally think driving makes everything easier, I don't know about everyone else but I can't take a bus everywhere or bike wherever I want, I don't have trains or things like that, cars make it much easier to get around.
10/09/10 Thinkssomepeoplearestupid
-7

I believe that all non-government businesses should have the right to decide whether or not smoking is allowed on their premises. I don't believe that government should be able to make this decision for business owners. I also believe that smokers are being unreasonably taxed. I live in GA where the average price for a pack of cigarettes is $5. I recently visited Washington and Arizona where prices average $8. It seems unfair to me that smokers pay so much for the goods, then have so many restrictions on where they may or may not smoke. The tax money is going to a good cause - insurance for children... So why can't smokers be "rewarded" in a sense, by having a little more freedom?
28/09/09 Eric Harrison
-12

This girl is obviously against smoking, but she also makes a lot of invalid and contradictable points. For instance, “Smoking is an extremely unhealthy habit”. Yes, it is, but it’s also the smokers CHOICE to smoke. If someone wants to pollute their lungs with cigarette smoke, LET THEM! “Burning just one cigarette releases over 4000 chemicals into the air”. This may be true, but think about our cars. They pollute the air worse than the smokers, but you don’t see any “No Driving In Public” Laws! That would be stupid! And as for her statement about the smoke triggering some asthma attacks, smoking is only one of many triggers. You can’t baby-proof the world, I’m sorry. Smoking is no more dangerous than the drinkers and alcoholics, but you don’t see many people complaining about them. And quite personally, I don’t think smoking is really that big of an issue as people make it out to be. I’m thinking that “Mommy” and “Daddy” have beat that smoking is soooo terrible into all these kids heads, and so they’re going off of what their parents have to say without making their own decisions.
08/05/09 AdertaJ
-6

These people that talk crap about the dangers of cigarette smoke should really think hard about the pollutants they put in the air when they get in their vehicles! I would much rather sit next to a smoker in a room,than I would sit in a room with the car running. How many vehicles do you think are on the road each day. I bet these people don't think twice about whether their killing anyone with their pollutants. It's not cigarette smoke causing everybody cancer. It's everybody that gets in a vehicle. Is that YOU?
25/04/09 xcaliber2112
-3

What absolute rubbish!! This girl has patently no idea whatsover regarding the true issues concerning smoking effects on people or the environment. As a British Scientist and a Member of the Chartered Institute of Water and Environmental Management, I can only assume she has written this in high school. Her comments unfortunately are obviously 'media gleaned' and, like most of the general public, she believes what she is told by the media. I would most certainly ask her for a list of the Bibliographic proof for her asumptions, with accompanied dates of publications titles and names of essayists and prime statistical facts to give credence to such strength of opinion. It is uneducated people making unsupported and invalid claims that causes a problem to today's society by confusing the ill informed populace.
16/11/08 David A. Davis
-13

a lot more people are still being exposed to unhealthy water. yet public fluoridation continues even though it has been largely discredited.
17/10/08 j.west
-12

I think America remembers what happened during Prohibition & will have more sense!
14/10/08 grumpyoldwoman
-9

I agree with you that not all smokers are low class, but unlike misinformed older generations, we know now that smoking is a drug habit. In reality, it shouldn't be viewed as a privilege. The only reason it's still legal is because of greed. Since it is legal, then it should be allowed in adult environments, such as bar rooms, but not where there are children present. It not only sets a bad example for young minds, it is especially unhealthy for small developing lungs. To say that second hand smoke is insignificant because the air is already polluted is nothing more than a rationalization.
27/05/08 just my opinion
-8

It is extremely unfair to class all smokers as "rude, ignorant, sloppy and inconsiderate". this is ridiculous as are all broad statements stereotyping certain social groups. I am a smoker and take full responsibility for my health, as an individual, if I choose to damage my own health who is the state to stop me? Even though I would not willingly cause discomfort or annoyance to non smokers, I think that if bars, clubs, pubs and restaurants were seperated into smoking and non smoking proportionate to the amount of smokers in that area it would solve the problem. also where did your rubbish statistics come from? "spending one hour with a smoker is the equivalent to smoking four cigarettes", seems unlikely considering only the most heavy smoker would smoke that amount in an hour. also the environmental issue is insignificant compares to the damage done by industry and by us in other aspects of our lives.
27/05/08 Tommy G
-10