Another New Year has started and I have been reminded yet again how some young people these days seem incapable of having a few drinks without kicking off and starting trouble.  Youngsters and alcohol just don't mix.  Luckily this time the only damage was a broken nose (not mine) and a smashed car headlight, the later only discovered a couple of days after the event.

You can almost see the trouble taking shape before it happens.  I've been out with friends in the past in pubs and clubs and you can usually spot the trouble makers a mile off.  Fortunately, so too can most doormen, and the police are usually present in many town centres these days.

I called them youngsters earlier but I feel I must qualify that.  They're usually young men between the ages of 16 and 20, although you do sometimes get a few of the older ones that can't handle their drink either.  I think I've only seen a girl causing trouble on a couple of occasions, although I'm willing to bet that they're the reason for many of the heated exchanges I've observed over the years. 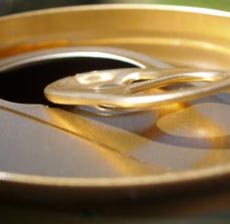 I just can't understand why theres so much aggression around, although perhaps it's all down to the fact that teenagers can get their hands on booze relatively easily these days.  If it's not dodgy off licence that turns a blind eye, it's the older brother or friend who buys it for them.  Personally, I didn't get into that scene when I was that age - in fact I didn't even go into a pub until I was eighteen.  That's extremely rare these days I think.

The solution I think would be to raise the drinking age to 21 and come down hard on under age drinking, and when I say hard, I mean REALLY hard.  I've seen the police out in the town centres confiscating cans of cider and bottles of vodka, but often the kids get off with a verbal warning.  Maybe if the parents were fined then they would keep a closer eye on who they kids hung out with and what they got up to.

That probably sounds a bit harsh, but the situation is out of control.  Why should the rest of us foot the bill for a few young idiots that don't know when to stop?

Well, young people can be given cider to drink, but they must work it off by hoeing turnip in the fields. lol
14/10/13 Nick
0

To be honest, I can't complain at young people (or any people for that matter) going out and getting drunk, I did it roccasionally myself for a while and found that lying comatose on the road side was a much overrated pastime, as was the almighty headache the next day.
If they want to ruin their livers and die at a ridiculously young age, then that's up to them, but I object to them screaming obscenities in the street as they pass by, throwing bottles at houses, overturning flower tubs and setting light to waste bins.
Alcohol can make most people a bit drunk, but it seems to make many young people stupid beyond belief.
01/05/12 Alf Red
-4

Connor, in somebody's house with the permission of everybody's parents, you are most definitely not breaking the law by drinking alcohol. It is in fact legal for any child aged 5 (yes 5) or over to drink alcohol. The legal drinking age is often confused with the legal age for buying. The situation is further confused by over zealous supermarkets sometimes not allowing adults to buy alcohol if they have young teenagers with them!

The jury is still out on whether allowing children to drink at home turns them into binge drinkers, or whether it teaches them that alcohol is just part of life and they don't need to go out and get hammered as soon as they reach 18!

I can only speak from personal experience; my 2 sons were given small amounts of beer and cider when quite small, and then allowed sensible amounts at home as they grew up; and neither of them has ever had any problem with drinking too much.

So enjoy your evenings with friends, don't overdo it and try to encourage others not to as well.
There comes a time when you realise the hangovers aren't worth it! (Unfortunately!)
21/02/11 grumpyoldwoman
-15

I think the majority of these comments are being quite unfair.

I'm 17, I like to go drinking with my mates, but only when we're at someones house, that way we don't get told off by all you nosey people making mountains out of molehills.

Sure, we aren't legally allowed to drink, and I respect that, but it doesn't stop us.

I know my limit, I'll separate myself (Or have a friend separate me) if I am getting too aggressive, which I don't. I think it's unfair to blame EVERY teenager for something one or two teenagers do.

Oh god its always young people isn't?Get the f@#k over yourselves you old c@#ts and have the balls to say it to their faces instead of whinging on a website!
06/07/10 joshrm
-15

My 20 year old went on a binge drinking session from the day of his birthday (Thursday) to lunchtime on Saturday. At that point I picked him up and he started being sick. He continued this for 3 days and was consulted by out of hours doctors, paramedics and finally the hospital due to alcohol poisoning. They said that he could have died of liver failure due to the shock of the alcohol intake in such an excess. It's Wednesday today and whilst at hime, he is still bed riden.
28/04/10 noneedforname
-3

It's a good idea to raise the legal drinking age to 21 and all drinkers should be able to produce ID on request from a landlord or the police. The fines from those caught drinking illegally would help pay for the damage done by the age group.
27/04/10 Federica
-16

I disagree with the proposal to raise the legal age for alcohol purchase to 21 because this penalises the majority of over 18s for the actions of a minority which surely cannot be fair.

There are enough legal sanctions available to the police, local authorities and courts without yet more unnecessary restrictive and patronising legislation.
09/09/09 Congo
2

isn't it time everyone in society stopped blaming someone or something else for their behaviour? How about this attitude: if these teenagers drink themselves into oblivion, they chose to do it, they're to blame, and they should take responsibility! If someone held a gun to their heads, they still had a choice (not a great one, but still a choice) call their (the gun holders) bluff and get shot or not, or get pissed - either way, they made a choice. Everytime one of them walks into an off licence attempting (and too often succeeding) to get alcohol, they made that choice. Granted, if the off licence lets them have it, they're not doing society any favours on the whole and they risk getting a hefty fine or even imprisonment, but what if they refuse? They risk verbal abuse, violent attacks, guns or knives pulled on them, their entire stock trashed, windows put through, family threatened . . . the list goes on!

So back to the teenagers taking the responsibility rather than schools, parents, licencees, the police yadayadayada - they know how old they are, fake ID or not, know if they look a lot older than they are, know if they've got someone else to buy it for them, or just stole it (also an option for some) - if a teenager is found intoxicated, drinking alcohol irresponsibly or behaving like an animal because of it - this goes for the 20 plus' aswell - make them pay the penalty where it hurts - maybe cleaning up the mess so many of them leave behind, preferably evenings and weekends to keep them out of harms way.
09/09/09 Lynn
-10

Clampdown on under age drinkers,the trouble with upping the price of beer is that honest ,proper people who like a drink & CAN BEHAVE get priced out,kids have too much money,too little to do,no "respect " for people s property,lives.etc,still you learn from your parents,if they are anti social twots,you are too....
07/09/09 west london geezer
-2

I cannot understand this modern preoccupation with young people and alcohol.Let the youngsters enjoy themselves.I have a nephew of nineteen,He cannot purchase alcohol from his Local sainsburys because they have a "think 25" policy!!!!!!!
15/07/09 Mr Hicks
-10

They should definitely raise the legal age limits to 21 in the UK across the board. Also police should be able to do more than confiscate drink and take the kids back home. Slapping a hefty fine or some prison time on the parents might help somewhat. Britain's culture with regards to alcohol is pretty immature on the whole
09/10/08 Northern Lad
-13

Mr Hitler hit the nail on the head. The scum attitudes of a large proportion of society is intolerable. It is sucking the life out of a once great nation. We truly have lost the sense of maturity and responsibility and it seems like there are too many who want to just get pissed and fight rather than go out and work hard for a decent, peaceful, quiet, NORMAL life.

The only thing I didn't agree with was raising the limit to 21. That means you could get married, join the forces and spend your wages on a lottery ticket for 5 years before you could have a beer.

What we need to do instead is shun drunken and aggressive behaviour as a society. Instead it is tolerated and glamourised by crap on the TV, everything from Eastenders, Hollyoaks, Shameless, et al.
26/03/08 Jack Sparrow
-3