Okay, so why is the current generation of teenagers being victimised?  Let's face it, we are because there's hardly a day goes by that you don't see something in the news or on television.  I don't understand why this is so, because I think that the majority of us are actually decent human beings.  There's only the few bad apples dotted around the country that let all of us down.  They do something wrong and before you know it "All teenagers are up to no good", and the rest of us are up the creek without a paddle.

For example, I was walking home the other day and I have to cross a particularly busy road to get to where I live.  It happened to be just 'spitting' with rain and yes I admit it, I was wearing a hooded top, but not what you would call a hoodie.  Anyway, I received so many dirty looks from passers by whilst walking down the road and all because of the hood.  I mean HELLO, I'm just an innocent person walking home and it just happens to be raining! 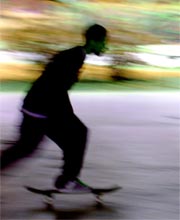 I swear that some people seem to think that all teenagers are in to knives, drugs and fights just for laughs.  I don't even know anyone like that at my school and before anyone suggests as much, I do not go to a posh school where everyone is perfect.  I guess the saying "the only good news is bad news" is so true.

Try to cut teenagers some slack...

Besides, has anyone ever thought that SOME teenagers might just behave the way they do because they learned this from adults in the first place?  Are the adults to blame?  No, of course not, it's all the fault of that teenager with the hood.  Anyway, I might be the only person in the world thinking this, but what can I say?  It's something I feel strongly about, so there we go - I feel much better now.

Please, don't try and judge a book by it's cover and try to cut teenagers some slack.  All my friends and most people at my school are all decent, and quite nice when you get to know them.

Hi, im a dad to teenage daughter and sympathise. Her mum has thrown things at her, puts her down everyday and screams in her face regularly. This apparently is because my daughter is very had to work with teenager. She was even told by her mum that she doesnt blame her for being a 'teenager'. My daughter is described as 'cheeky' when she says she doesnt like how her mum treats her. The social services thought there is no case for the police and took her mums word for it that she is a difficult teenager ansd needs to develop resilience and look at why mum got into a rage fit. Mum of coarse id fine and doesnt need to change. I feel for young people, sometimes the adults are the children
23/06 Dad
0

We are the scums? Shouldn't you adults think back and think carefully on who raised this generation? Technology is developing faster than man can catch up with, you are just another pissed of redneck jealous of teenagers and our so called "easy life!"

Teenagers are the scum of this country and should all be sent to Afghanistan to get a life!
23/05/13 Nick
-12

I go to a good school, however their are some real butt-heads to. I'm not like the angry ones. I just cant get angry... I can get annoyed, but never angry. Even then it only last a minute or two.
26/08/12 jonah
8

Yes, well done Louise. However, your self-congratulory post seems to say very little in relation to the original topic posting, merely stating that not all teenagers are thugs. I hardly think that we needed that to be taught to us. When we hear about what is going on in hospitals, with nurses showing little or no compassion, and with doctors displaying breath-taking levels of arrogance in regard to the elderly, then one can suggest that 'thuggery' takes on a number of different form.

However, it was an opportunity to 'blow your own trumpet', so to speak, which is understandable.
28/06/12 miserablemoaninggit
-3

This is getting ridiculous! I am due to start medical school this year and I have worked very hard to secure a place. Around 2000 young people apply to each medical school alone when there are around only 300 spaces, never mind all the other courses there are. It is getting harder and harder to get into university because there are so many young people excelling in their studies. So we are not all thugs. I know there are a few, but the majority of us work very hard to secure college, university places and jobs When there are so few places available to us. The recession is making things harder to find work, things that perhaps previous generations take for granted. Cut us a little slack people!
28/06/12 Louise
-1

One thing that really annoys me is how people think of teenagers. Not all people, not all teenagers. But most parents dread their teenage years, most security guards keep a much closer eye on us than they would anyone else, and it doesn't seem fair for shopkeepers to only allow a certain number of teenagers in their shop at a time. I don't drink, I say please, thank you and excuse me, and I don't hang about outside at night beating up old ladies and throwing stones at windows. People think teenagers get cheeky and moody because of their hormones-trust me, the hormones are annoying as hell, but they're not why we get so angry.

We get angry because we're always being told how rude and arrogant we are, people expect us to be antisocial and rude. Even though I ask questions and am proven wrong all the time, and I accept that, if I disagree with anything an adult says then they say I think I know everything, I'm always right, blah blah blah. Even though I certainly don't think I'm always right, (Not even close, to be honest) and I have better manners and grammar than a lot of adults, I'm an antisocial, stupid hooligan who knows nothing about the world, should not be listened to, and need to be controlled, and if I disagree with something, if I'm sure that I'm right, and I turn out to be wrong, and I admit that, I'm arrogant?

Of course, not all teenagers help the point I'm trying to make. Some of us are rude, arrogant and do, in fact, beat up old ladies. But not all of us-I'm not saying we should be elected as world leaders, I just think it would be much fairer if people got to know us, just on the off chance we're not arrogant. OK, granted, we snap at our parents and ignore their advice-but we all have bad days, we all have bad moods, and we all do stupid things-just because some of us are horrible, doensn't mean we all are.
23/04/12 Anonymous
16

thats so true, teens are victimimised and a nuisance to society. Well if you treat someone like a criminal it would appear to become a selfullfilling prophecy.
15/11/10 bellssssssss
9

Yes DSG, I know what you were talking about which is why I phrased it "hooded jackets" or hooded garments if you prefer. A hoody is a hooded jacket as is an anorak and to a person of a certain age they don't look menacing as much as geeky and old fashioned.

Also, many are are badly cut, cheaply made, shapeless and made of tacky nylon fabric but kids pay a fortune for them because they want the brand logo on them and have no idea that they are total schmutter. Their choice of course.

I don't equate hoody with hoodlum and I accept that it is just the fashion for youngsters - although I think it is starting to go out of style now - but you can't see what it looks like through our eyes. Think of something that looks old fashioned and irredeemably geeky to you now- maybe a beige cable-knit, acrylic cardigan - and then imagine 20 years down the line that your kids are wearing it!
25/09/10 Sally
0

I never said anything about anoraks,Sally!
I was talking about hoodies.
25/09/10 DSG
2

I used to be a teenager

Teenagers are going through the worst period of their lives, the stresses of exams coupled with the anxiety of finding a job when they leave school and the embarrassment of puberty are hard for a young teen to take. On top of all that they are constantly told that they are useless, good for nothing thieves and junkies. It's little wonder why the youth of today are so out of control. We should be supporting our teenagers, helping them to grow into the responsible young adults they ALL have the potential to be. Instead society tars them all with the same hypocritical brush.
15/09/10 I used to be a teenager
12

Sorry DSG in the 1970s anyone wearing a jacket with a hood was considered to be hopelessly geeky! No one who wanted to look good would wear a hooded jacket - why do you think calling someone an "anorak" is a term of abuse?

You only got them on anoraks and duffel coats and no one was silly enough to be talked into believing that they looked cool so no one ever wore a hood up indoors!

People only wore them up outside to keep the wind and rain off. Most older people on buses look at you , not because they think you are going to mug them but because it looks silly to them, like sitting on a bus with an umbrella up!
16/08/10 Sally
1