I think the legal drinking age should be increased to 21 years.  Recently there have been far too many violent incidents amongst 18-20 year old which have been either alcohol induced or drug induced or even both.

In my home town about 4 weeks ago there was a fight in the town square amongst four 20 year old lads.  Two of them ended up in hospital seriously injured as they got stabbed.  A couple of weeks ago my sister was out near where she lived with a few friends and one of her male friends was beaten up.  A 20 year old lad was being verbally abusive to him and when politely asked what his problem was he punched his face and when he hit the ground he proceeded to kick him.  Luckily he didn't sustain any serious injuries, just a terrible black eye and feeling a bit tender.  But still, it should not have happened.

Last night on my way home whilst listening to the local radio I heard about a murder that happened in a town 15 miles away from me.  A fight had started around 3am in the morning amongst 20 year old lads and one of them got stabbed but sadly died in hospital. 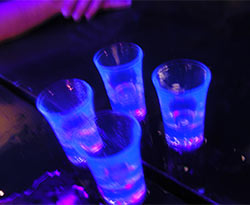 Another incident happened in broad daylight on a Saturday afternoon outside the flat next to my sisters.  A group of 16 year old lads assaulted a 55 year old man because they had decided to block the road and he removed the blockage.  The man was so badly injured that an ambulance had to take him to hospital.

All these incidents really do frustrate me.  What is going on with the youth of today?  Clearly all but the last incident was alcohol and/or drug infused.  So one thing that can be done to try and reduce these crimes is to increase the legal drinking age and really crack down on it.

Legal drinking age should be increased to until such time when you have graduated from university or have started a full-time job.
14/10/13 Nick
-2

I disagree with raising the age as a catch-all solution to problems where young people are concerned. Im 27 so it won't affect me but there are plentyof drink-fuelled violent incidents up and down our high streets at night by much older people like 35-40 year old men and women. So what? a curfew on under 65s?
24/05/13 ahforfoulkessake
2

The trouble is Boblet, ordinary folk are people of our age and maturity, but most youngsters don't want to mix with us and gain the wisdom of life that we possess!
07/05/13 Jethro
-5

I for my part would sooner see young folk in a public house drinking beer with ordinary folk than taking drugs, sniffing solvents, or smoking pot in the shadows.
07/05/13 boblet
-2

Disagree on this, there are already enough age limits and restrictions on younger people as it is.
07/05/13 John R.
0

Exacly, It would be good to change the rules during the game. Only in USA or Chile is that strange that if you are 18 you get all the laws and fo instance you are allowed to get married to someone, adopt a child, decide about your life and someones (you can concive a child and bring it up), you can establish a company, stop going to school, work full time, drive without any supervison etc. It is EVEN funny that you can decide in such wide range of matters and even (in some cases, some countries) decide of someones life (euthanasia) but you can buy alcohol. You can establish a family and bring up children, take care for them but you are not allowed to drink. You can take the most important decision in your life all over the world but you cant drink. Even a woman or man who are 16 (epart from some African or Asian countries or Scotland) can get married to someone if they give birth to a child (automatically they get adult according to the law after getting married to someone- who is over 18s or even 16s - in some countries in Eastern europe if you have a child and are under 18s but over 16 you must ask you parents for permission to get married (at the court) but AFTER the day of your wedding you dont need ANY supervising of your parents- it is like "permission of your parents to make your adult" .... paranoid situations
02/06/12 Alex
-5

Oh yes, increasing the drinking age will totally stop underage drinking...not likely! It'll increase it cause you will have multiple years worth of folk who are used to drinking, and won't see why they need to stop since they only drink responsibly and without causing problems.
17/09/10 CF
-13

You should know, as an obviously experienced man of the world, that not all young people act like that. In fact, a tiny, tiny minority do so, and don't forget that most violent assaults are committed by the 25-35s, hardly what I would call 'youths'. It's simply that newspapers and people generally don't mention stories about a 35 year old getting drunk and assaulting an older person, as it has no 'shock factor'. Get your facts straight and perhaps even smile at some young people now and again - two incidents (horrific though they may be) are hardly justification for demonising a whole generation. I am 19 now, and have multiple groups of large friends who I know well, from all walks of life, quite literally, and none of them have ever assaulted anyone. So, please open your mind and stop alienating my generation - after all we're going to be the ones nursing your in your old age, paying for your NHS care and possibly even being your care staff. We're good people on the whole, people need to open their minds to that.
06/07/10 ~Wind
-2

Yes, increase the drinking age and parents teach your children that nothing good comes from alcohol. It rots your liver, it gives you bags under your eyes, you say and do things you regret, and if you conceive a child and you're both drunk, odds are the child could have "fetal alcohol syndrome" and it makes you poor by taking all your hard-earned money. Booze should be bypassed. It is NOT a health-giver and is a complete WASTE OF TIME and LIFE.
27/04/10 Someone Who Knows
-19

Increasing the legal drinking age will not solve a thing. People will still drink if they want to drink. What can the police do about it? Nothing, nothing at all.

There are violent incidents happening in the UK every single day. Not all these are down to being alcohol related.
09/04/10 Davo
-1

Some teenagers may not handle there drink well, but there are alot that do im 18 and me and my friends like going out for a drink and never get into fights besides I no people who are 26 and over and go out for a drink and get into fights it isn't only teens and raising the age to 21 wouldnt solve anything it would just make things even worse and its not fair on the teens who drink without gettings into fights. its 18 and should stay that way!
09/04/10 Emma
-9

Concerned about health of chil

I agree that the age should be increased - teenagers do not realise the impact alcohol has on their health and brain - when they get older & have health problems they will regret drinking from a young age. It is up to parents & society to protect the next generation.
30/01/10 Concerned about health of chil
4

Regarding today's news about children not being given alcohol until they are at least 15; it's amazing how many results you get if you google the words "liam", "donaldson" and "idiot"!
17/12/09 grumpyoldwoman
4

Raising the Age will make the problem worse, it is also immoral how can you say that someone is a legal adult at 18 yet cant drink Alcohol untill they are 21 it would be Stupid.
The only Country that tells Adults they cannot Drink is the Neo-Prohibitionist USA and we Brits do not want to go down that hypocritical road.