As I get older (58 years young) and reflect on life that though people in general have more spending power, more consumable income than 50 years ago; I have to ask are they really more content than people in the 1950s and early 1960s?

People seem so superficial in that appearance is so important.  Its a must have generation with clothes, shoes and other consumables.  People want freedom to do their thing, though not realising that with this freedom comes responsibility to others as well as to oneself.  Actions have consequences and considerations for others would make one feel better and of course may make others happy. 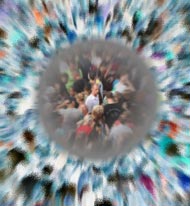 People and society are complicated and there is no simple solution to the problems in life certainly not those promoted by politicians.  Maybe its time for people to stand back and see how they can help themselves, usually making some effort for themselves would be a start.

In school perhaps children should be taught its only a temporary pleasure in craving or, wanting things.  Children should be made aware that concern and respect for others may provide a greater sense of self fulfilment.  Obviously not all children will buy into this, but some might and least it would be a start.

Some people say Christian Religion should be emphasized more in life.  I think a more secular but ethical moral instruction would be more appropriate.  May be it is time for responsible socialism.

Its because of the selfie. What a self obsessed, narcissistic indulgence. Also because of social media, people are now managing their self image as though it were a brand now. With people now saying look at me with their profile they have forgotten that the old maxim, you cannot judge a book by its cover. However I see this as one point in a continually oscillating line. At some point overindulgence in appearance will fall out of favour.
25/05/17 sofaricantseethebox
1

I think the author, Chris, makes some good points.
But and there's always a but, the idea of socialism is good that we help each other but it shouldn't be forced ie the supposedly well-to-do (by governement's ever changing estimation) being made to feel bad that they've worked hard to get what they have and having new ways of milking taxes to stop "inequality" in society.
Face it, society and life are unfair, no offence to Chris, I';m sure he knows that anyway.
But the point about people needing to realise that wanting something is probably better than getting it is right on the money.
Too much advertising for crap on tv and internet and magazines.
"If you don't have this you'll die poor and lonely and you don't want that" is the message we get from everywhere.
I simply remind them I'll be 10, 20, 30 whatever pounds poorer if I do buy their product.
26/09/13 ahforfoulkessake
4

Jethro/oap, you know perfectly well jobby copied my post from a few days ago. Unlike yourself I do not use multiple names.
19/09/13 Johan
-7

Jethro/oap, you know perfectly well jobby copied my post from a few days ago. Unlike yourself I do not use multiple names.
18/09/13 Thomas
-2

Hello Jobby, Just to remind you this very same post( 18 sept 07.39) was originally posted on the 15 Sept 13.13 ( word for word) by you under the name of Thomas. How long before you accept that you need help, or is it these other people in your head tell you otherwise. I will not be responding to you any longer as I feel my replying is feeding your illness. We're Done.
18/09/13 Jethro
9

There are a few nasty characters on this site, however Jethro is far and away the most obnoxious. Even the worst of the rest appear to have some integrity and compassion. Jethro however is a racist and a bigot of the worst type. He takes a gleeful pride in attacking the most vulnerable members in our society, in particular those suffering with a mental illness, whom he mocks and derides on a daily basis. The worst diatribes of the occasional trolls seen on this site are at least peppered with instances of humility and humanity - Most of them are lost and lonely souls and they more often than not deserve our pity and patience - not so Jethro, he is thoroughly despicable and unrepentant, devoid of character, and unanimously disliked by the thoughtful souls upon this site.
18/09/13 jobby
-3

Jethro, you are not strong enough to stand on your own. You have to make alliances with people like boblet (1073 comments!!!!!). When it comes to slinging mud, you, yourself, are the reigning champion. I think everyone has now figured how things work......next, boblet(1073 comments!!!) will spring to jethro's defence, or, it will be "oap" which is another name jethro stategically uses from time to time!
17/09/13 Thomas
-1

Why should I lighten up? I am a suspicious person, what’s wrong with that? Cunning & devious, your terms, I prefer tossers & twerps. Your latest post has a normal ring to it?
17/09/13 boblet
6

Boblet, jethro and oap. Why do you take everything posted on this site so seriously and so personally? Whenever a new name appears you jump to the conclusion that it is part of the "conspiracy" of "cunning, devious person(s)" who are "hell bent on causing trouble". Lighten up a little guys, like you I think TWG is a great site, but the three of you should try to take it in a lighter vein
16/09/13 Samantha
-4

OAP, I have to be very careful what I say now, but I mean this in a sincere way. After reading your post I could not stop laughing. God bless.
16/09/13 Jethro
10

Hello Samantha, If you need someone to talk to feel free with me. I cannot get out much anymore and would enjoy a chat. I wont mind if you change your nicknames cause that will mean I make a new friend every day.
16/09/13 OAP
11

There you go J you have posted a perfectly concise & reasonable post, but what has emerged from the mud ?
16/09/13 boblet
6

Emotional honesty - don't run away from that pain