Maybe I'm just getting older, is it me or is society in general going down the tubes?  I recent moved to Epsom, which WAS a nice place to live, or at least that is how I remembered it ten years ago.  However it has now become infested with sub blue-collar single parent chav scum.  I can only blame this on the near vicinity of council estates.

The working classes seem to have vanished and have been replaced by socially retarded vermin-male and female inbred mutants who have no respect for themselves or their offspring.  We are talking about the kind of (so called) women who are grand mothers at 20 years old and use McDonalds as a 24/7 crche.  Not that this is all the woman's fault (I use the term woman broadly) the ape like excuses for fathers are even further down the evolutionary chain.  Where did this revolting, common, dole scrounging, obese, fag smoking, Trisha watching, walking talking human manure come from? 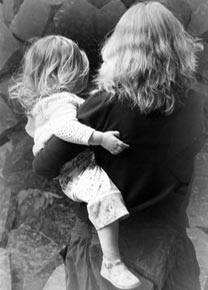 Well the answer to this is of course their parents, who probably started breeding themselves when they were 13.  They were encouraged to fail by their parents, who of course cannot and will not accept responsibility for their offspring and indeed why should they?  This country is the only country in Europe to encourage failure and destroy personal ambition or self respect by engulfing these sub humans with BENEFITS.

There are two types of single parents those that struggle and work hard in the face of hard economic reality and absent fathers, and then there is the other type; disgusting daytime telly watching, track suit wearing slags are out-breeding us all with their animal like offspring (I am now foaming at the mouth by the way!).

Can't we just set up a Zoo for humans and put these people behind bars?  Lets face it; its a home from home for most of them.  We could charge rich lard ass Americans to hunt them throughout the countryside as a form of pest control.  Once they have been exterminated we could perform a similar tactical strike on certain religious communities.  Just vote me for Fuhrer (Sorry I meant prime minister).

Took my wife and kids to great yarmouth last week for a cheap break, got diverted cause of a smash on the road leading in and spent over an hour in traffic. We stopped two nights before seeing what a total dump it was, got back in the car and went home. Don't go there, full of immigrants and unemployed fatties.
06/08/13 dave
-3

I went to Gt Yarmouth around 2000 expecting it to be a good resort being in Norfolk. It was a bit of a shock and a disappointment. But places on the south coast of England are very run-down - Bexhill, Hastings, St Leonards, Bognor, Seaford, Margate, Clacton, Herne Bay, Southend, Blackpool, Prestatyn, Rhyl, Newquay, Bournemouth, Shoreham, Southsea... Haven't been many places north on the coast but I hear Grimsby is a dump.
06/08/13 Teutonic Knight
1

Oil rep, What are you complaining about at least you can leave, I have to live in this shat hole. the place is full of outsiders with shat for brains, and when i say full i mean full. all the shat of this country has been dumped here.
05/08/13 jettyboy
-6

Britain really isn't a nice place any more if you live in a town or city (with few exceptions). Best place to live in my view is in the country. People are usually more friendly and there is not the anti-social behaviour and crime of provincial towns.

As for 'chavs' I don't know the answer. The type of men and women described in the gripe may start outnumbering everyone else and then where will we be? I don't understand what life it is to be watching daytime TV, never working, having a diet of rubbish and basically caring sod-all for anything much.

I have just read the news released by the government that seaside towns are in " severe social breakdown". I have had the unfortunate task of visiting Great Yarmouth in Norfolk several times this year which is named as one of the places in question. You can see exactly what the survey means, extreme obese people, chav's ( I think this is the term used), very young girls with babies and stick-thin males in tow, immigrants crowded together on street corners, and teenagers to later sixty's aimlessly wandering the town. Not a place I enjoy returning to, a quick exit is always on my mind.
05/08/13 Oil Rep
-6

Just been watching tennis, the roof is closed, it's raining and dull, but there's still those selected posers wearing sun glasses and panama hats. Typical stereo type pratts that must act the part. The class system is alive and well and people wonder why there's so much division in the British society with these snobs running around. (thats better, whinge over.)
27/06/13 coudn'tgetin
-5

So the government today has announced is to spend £200 million on problem families, thats a lot of frontal lobotomies to get through before the problem is solved. I would have thought a marlin spike and a mallet would be a better option.
24/06/13 anon
-1

There was an item on ITV Central this evening about a single mother of 7 kids complaining about the fact that her current benefits of £32,000 pa (what???) will be reduced down to £24,000, in line with government policy to cap benefits at the average level of a working family.

She was pictured handing out packets of crisp to her children, and then later saying that she would struggle to feed and clothe them because the rent on her 6 bedroom home would take around half her salary.

The media made a half-hearted attempt to enquire as to why so many children, and then quickly backed off. Of course, the reason why she has so many children in the first place is because of the benefits system, the welfare crutch that awards worklessness, and promotes irresponsible behaviour, including having so many children.

Yes, society is going down the tubes. Succession after succession of terrible governments, pandering to votes bought by the welfare system, has led to the shocking system that we are now in.

However, having said all that, I do object to the government getting tougher on welfare recipients, and yet is still very shy in dealing with the obscenity of fat cat pay and banker's bonuses!

Is there any point voting for any of the 3 main political parties? Of course not!
12/06/13 miserablemoaninggit
-7

Yes, there's nothing quite like a good old dose of austerity and benefits cuts to reveal the true face of modern British society. And to think it's going to last for another two or three years, if these plonkers that call themselves politicians can be believed. God only knows how we will be treating one another by the year 2016. I think I'll try to dig out my old mans tin hat.
12/06/13 OAP
-11

If you look around when out you will probably see the likes of what were described in the gripe. I lived in a town with a snooty reputation but regularly saw tracksuited 'chav' types with a fag on and a gaggle of unruly kids in tow. They are usually overweight, presumably via a pizza and McDonalds diet, and hail from a council estate.
12/06/13 Alien 3
-9

Tris. Tick the boxes that applies to you.

Snob.
Pretentious.
Conceited.
egotistic.
pompous.
And most probably flat broke, up to your neck in debt and stressed out of your skull.
If you choose to reply be careful and pick your words cause they may confirm what we all suspect of you.
11/06/13 Jack
-4

@ Tris, So, pray tell me at what level in society do you aspire to? Bearing in mind that this site is for gripping, and is usually frequented by some angry frustrated people that gain relief by abusing others, just as you have demonstrated. I would have thought, a person with your high principals would not be wasting time on a site such as this, or are you just an angry person too!
11/06/13 Jethro
-1

Only a bitter, working class/very lower middle class, uneducated, thesaurus-reliant, social climbing 'Bracknell', (if you're knowledgeable), 'Hyacinth Bucket', (if you're not) type of moron, could have written this.
Not only are the identified scum indeed scum, but I'd imagine that the socio-demographic that you aspire to, would probably be obliged if you walled yourself in with them.
11/06/13 Tris
-12

Why don't the government send all these sub-human species to Afghanistan to help our soldiers remove the IEDs?
04/06/13 Nick
-11